The worst affected is undoubtedly, the Bellandur lake that gives off a white frothy foam that spills on to its surroundings, letting off a stench that has people holding their noses, thanks to the pollution of its water.

Covered in toxic, highly flammable froth, Bellandur Lake is now a black spot on the city's ecosystem. Experts have screamed solutions from the rooftops, demanding that the entry of sewage into the lake be stopped at once. A plan for the construction of a wetland at the mouth of the lake has been presented to the government but has made no progress since. The lake requires an STP of 490 MLD capacity although existing plants can hold only upto 250 MLD. Lack of enthusiasm and political will are holding back rejuvenation efforts, reports  Aksheev Thakur

It’s a fact that Bengaluru once was home to many lakes that cooled it and supplied the water it needed. Over the years it sadly, lost its lakes that formed a chain- like network  to so -called development and encroachments. And today the  lakes that remain are filled with sewage from nearby apartments and industries.

The worst affected is undoubtedly, the Bellandur lake that gives off a white frothy foam that spills on to its surroundings, letting off a stench that has people holding their noses, thanks to the pollution of its water. Even worse, the lake’s  surrounding have caught fire several times since 2000 as a result of the contamination. The worst fires were in February 2017 and more recently, a few months ago. Speaking volumes about the apathy of the government the second fire at the lake broke out despite the recommendations of an expert committee formed immediately after the first to prevent such an eventuality. 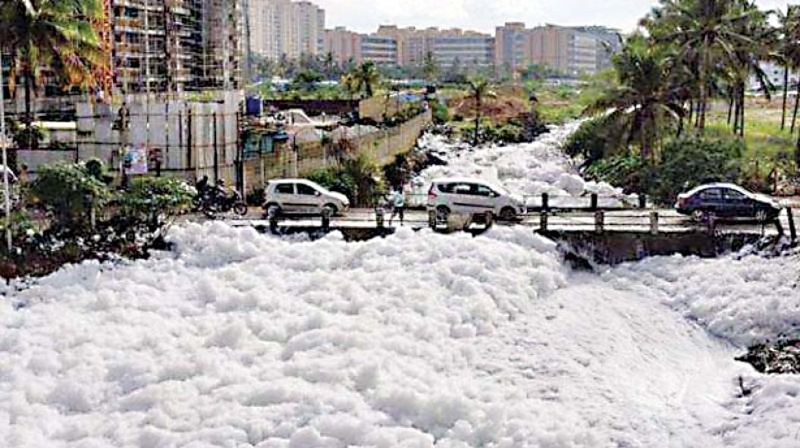 “The regulatory agencies did not show any enthusiasm to  implement the recommendations,” regrets Dr TV Ramachandra, lead scientist of the  premier Indian Institute of Science (IISc.). Instead, the Bangalore Development Authority( BDA) , the custodian of the lake,  decided to install sluice gates at its mouth,  much to the anger of environmentalists, who warn this will solve nothing.

The greens believe the BDA needs to act on the recommendations of the expert committee and fund research to get to the bottom of the frothing in the lake. In their view, the creation of a strong biological wetland at the mouth of the Bellandur lake, as has been done at the Jakkur lake, could also strengthen its bio-remediation capability.

Dr Sharachchandra Lele, a senior fellow of the Ashoka Trust for Research in Ecology and Environment (ATREE), blames the Bangalore Water Supply and Sewerage Board (BWSSB) too for the mess as it has failed to connect the underground drainage (UGD) around the lake  to a sewage treatment plant( STP) , allowing entry of untreated sewage into Bellandur.

Today the lake is filled with 460 million litres of sewage and the continuous dumping of  solid waste in its waters has resulted in the emission of methane, which aggravates any fire that may be set off on its banks, say researchers of the IISc.

“The major problem is that the catchment of the lake receives sewage. The long-term solution is to construct more STPs and connect the UGD to them,”  says Dr Lele.

Agreeing,  Mr Ram Prasad, co-founder, Friends of Lake, stresses that for every few metres of a drain, a wetland should be created to deal with the pollution.

Meanwhile,  the Karnataka State Pollution Control Board (KSPCB) claims to have identified 99 apartments around the Bellandur lake, which don’t have a UGD or STP. “Notices are being served to all of them,” says board member secretary, Ranga Rao.

While this may take care of the sewage, the authorities have not taken even the minimal precaution to prevent the recurring fires despite being rapped by the National Green Tribunal (NGT) for not clearing the weeds and grass that catch fire along the banks of the Bellandur lake, point out angry ecologists .

‘Wetland design may save lake, but will authorities start?’

Are the current STPs installed by the BWSSB helping the lake?
No, they earlier installed an STP  of 247 MLD capacity and later built a 100 MLD capacity STP when we need an STP of 490 MLD capacity. It’s also possible that existing plants aren’t working properly as the water quality is not satisfactory. Had the STPs been working correctly, water quality would have been better.

The expert committee suggested installation of water quality monitors. Has this been done?
Who cares about the suggestion? The BDA is more interested in taking the suggestions of consulting agencies and come up with solutions like installing sluice gates, which will not solve the problem at Bellandur. The live monitoring of water quality is important.

Will the construction of a wetland at the mouth of the lake solve the issue?
We have sent the design for a wetland to the Karnataka Lake Development Authority (KLCDA). This will stop the entry of nutrient into the lake, which is one of the major causes of its fires. The enrichment of nutrients leads to  formation of methane, which is highly inflammable.

Is it too late to implement the suggestions?
No, but the question is when will they start? Even if the suggestions are implemented now, things will improve. The fire at Bellandur has been taking place since 2000. The illegal migrants settled in the catchment area should be relocated.

Don't be under illusion that COVID is gone: Karnataka CM warns as restrictions ease