CHENNAI: J Jayalalithaa, the charismatic six-time Chief Minister who ruled the political arena and Tamil cinema world alike for decades on end, died at the Apollo Hospitals here on late Monday night, plunging Tamil Nadu and her party, the AIADMK, into a political crisis.

Jayalalithaa, 68, breathed her last at the ICU of the hospital at 11.30 pm where she was admitted on September 22, despite efforts to sustain her revival, the Apollo Hospitals said.

“This is with indescribable grief that we announce the sad demise of our esteemed Chief Minister of Tamil Nadu, Puratchi Thalaivi Amma at 11.30 PM today (05.12.2016),” the Apollo Hospitals said in an official release.

It said the Apollo Hospitals joins the nation and the people of the state of Tamil Nadu in deeply mourning her loss.

A political veteran, Ms Jayalalithaa achieved a historic milestone on May 19, 2016 when she led the AIADMK to a spectacular successive term on her re-election, a feat that was earlier achieved only by her mentor MG Ramachandran. A darling of the national media, Ms Jayalalithaa was hailed as an astute administrator and a shrewd politician, but her critics termed her arrogant and accused her of behaving like a monarch. 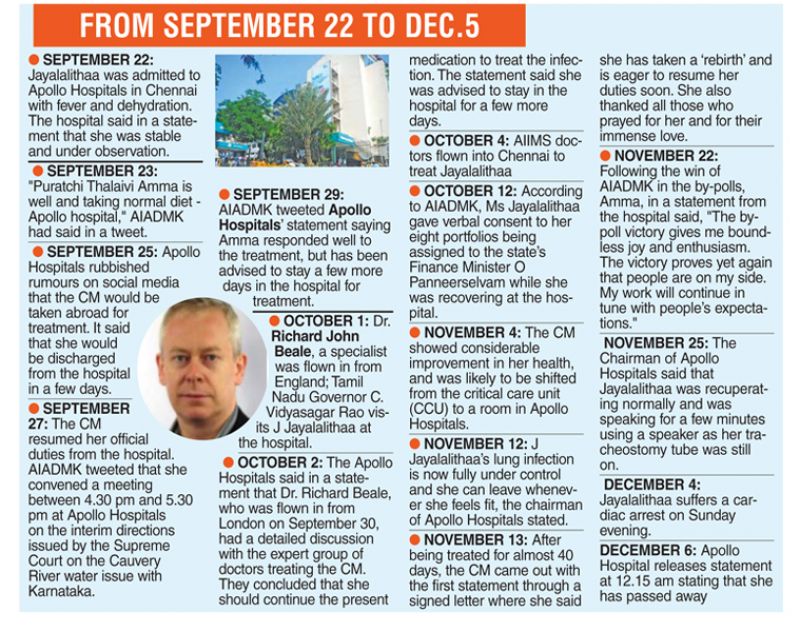 Ms Jayalalithaa suffered a cardiac arrest on Sunday evening and was put on ECMO support since then. The Apollo Hospitals has been issuing periodical health bulletins about the Chief Minister’s health saying that she was very critical.

An indication that the battle was lost and hopes began fading of a recovery came at around 3.30 pm when British expert Dr Richard Beale issued a statement saying that the situation was grave and everything that should be done to bring Ms Jayalalithaa out of the present situation was being done.

The Chief Minister was rushed to the Apollo Hospitals on the night of September 22 and a medical bulletin issued the same night said she was being treated for fever and dehydration. As the uncertainty continued for days together, the Apollo Hospitals rushed British expert Dr Richard Beale, a world-renowned Intensivist Specialist, to examine Ms Jayalalithaa, who have developed infection in her lungs.

Later, a top-notch team from the prestigious All India Institute of Medical Sciences, New Delhi joined the team at Apollo Hospitals and Dr Beale. Together, the doctors drew a treatment plan that was continued till she suffered cardiac arrest on Sunday evening. The treatment plan had worked to a great extent and this was evident from a statement issued by Dr Beale on Monday afternoon in which he said he was “like everyone been most encouraged by how well she had been doing.”

Ms Jayalalithaa entered politics in 1983 on the prodding from her mentor in film industry the legendary M G Ramachandran and was made the powerful propaganda secretary of the AIADMK and within a year, she was the party’s face in the national politics after being elected to the Rajya Sabha.

During her stint in Rajya Sabha, Ms Jayalalithaa developed a good working equation with the then Prime Minister Rajiv Gandhi and she was the virtual No.2 in the AIADMK after her mentor MGR’s death in the winter of 1987. Though Ms Jayalalithaa lost the initial battle with MGR’s widow Janaki Ramachandran, she bounced within a year’s time after which Ms Ramachandran quit politics.

Ms Jayalalithaa became the Chief Minister of Tamil Nadu in June 1991 and her first five-year tenure between 1991 and 1996 was marred by allegations of corruption. After a five-year lull, she bounced back in 2001 though she did not contest the Assembly elections and became the Chief Minister for the second time, though the tenure was interrupted due to a court ruling.

After her victory in 2011 Assembly polls, Ms Jayalalithaa catapulted the party as the eternal biggest outfit in Tamil Nadu and ensured that power does not go away from her.

Bill to privatise electricity in LS, is sent to Parliamentary panel