Congress-JD(S) alliance worked out seat-sharing arrangement as a result of which Congress is contesting one parliamentary and assembly seat and JD(S) the rest three. (Photo: File | KPN)

Bengaluru: Ahead of Diwali, celebrations erupted for the ruling party in Karnataka as the Congress-JD(S) alliance bagged four out of seats that went for bypolls. The BJP could only win Shivamogga (Shimoga) parliamentary seat.

The counting of votes for Jamkhandi and Ramanagara assembly seats and Shivamogga (Shimoga), Ballari and Mandya Lok Sabha seats, which went to polls on Saturday, began at 8 am on Tuesday.

This election has been termed as the semi-final before the 2019 general elections as both state’s ruling Congress-Janata Dal (Secular) alliance and the Bharatiya Janata Party contested for the seats. While it was a battle for pride in the three Lok Sabha seats of Ballari, Mandya and Shivamogga, the assembly seat results were said to either reinforce or weaken the Congress-JD(S) alliance’s majority in the state.

While the BJP put up candidates in all five seats, the Congress-JD(S) alliance worked out a seat-sharing arrangement as a result of which the Congress contested one parliamentary and assembly seat and the JD(S) the rest three.

Emerging as the single largest party after assembly elections in May, BJP won 104 of the 224 seats but failed to form the government.

Here are updates of by-poll results in Karnataka:

01:19 pm: “I congratulate Congress leaders in the state and at the Centre. I also congratulate JD(S) state leaders and workers who worked towards this win. BJP calls JD(S)-Congress coalition 'Apavitra Maitri', today that contention has been nullified,” says Karnataka CM HD Kumaraswamy.

“This election was the first step. There are 28 Lok Sabha seats. We will work with Congress to win all of them… that is our goal. This is not an empty boast just because we have won today. This is the confidence of people in us. This win is not making us arrogant", adds Kumaraswamy. 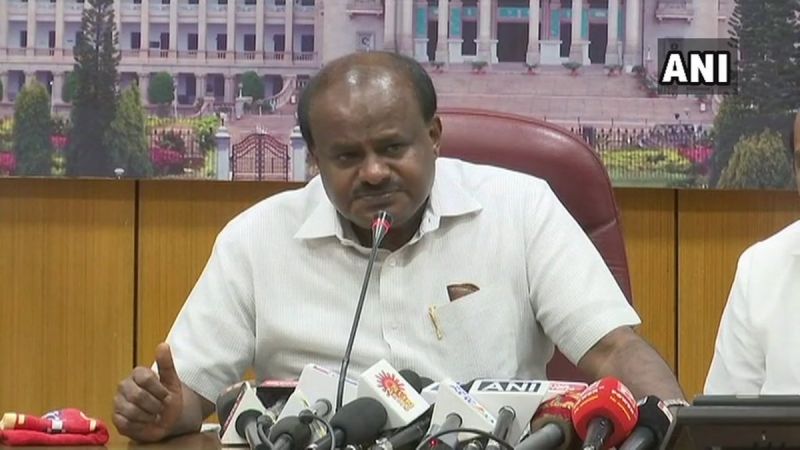 01:11 pm: BJP's BY Raghavendra wins Shivamogga parliamentary seat with a margin of 52,148 votes.

12:25 pm: “People have rejected BJP. It is also a rejection of Modi government.  Bypoll results will send a message to the entire country that the time for change has come,” says Congress leader Dinesh Gundu Rao.

12:23 pm: “Definitely, in any democratic result, election process...people's mandate is very important. It's the direction to the people of this country,” Karnataka minister DK Shivakumar when asked will Karnataka by-election give a message to the whole nation before the 2019 general election.

12:22 pm: “I think as far as southern India is concerned, you can't make Ram Mandir and all those issues a political plank. People are looking at what they're going to get, what benefit they're going to get in social and economic sector, administration and transparency,” says Karnataka minister DK Shivakumar. 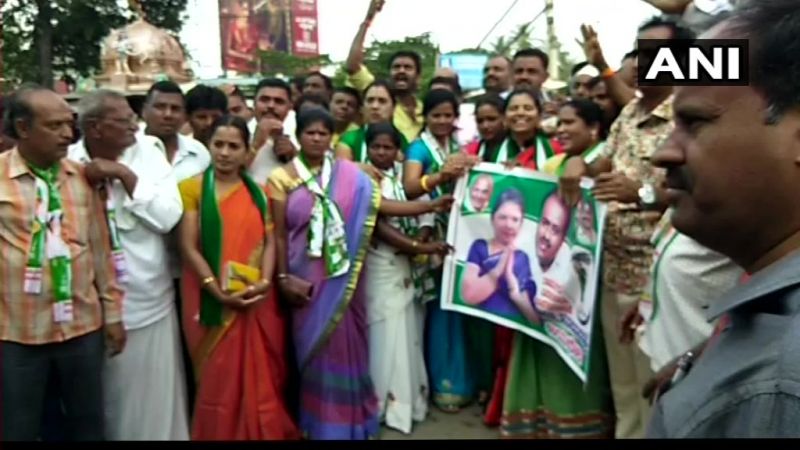 11:32 am: Congress members and workers celebrate outside party office in Bengaluru. Congress-JD(S) alliance is leading on 4 out of 5 seats in bypolls. 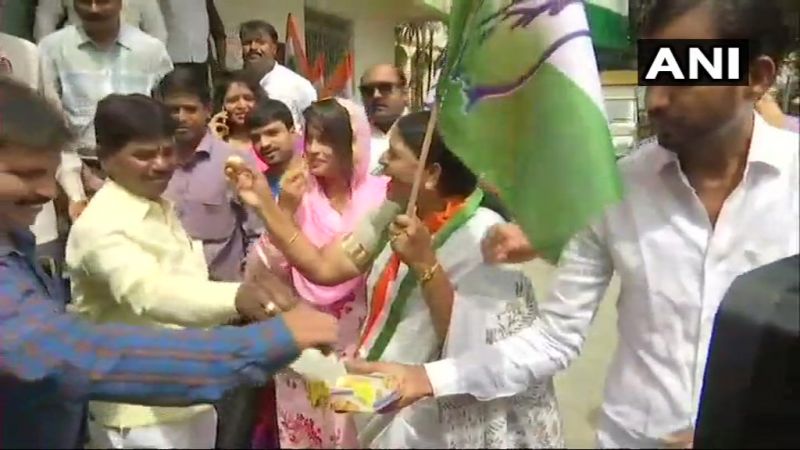 11:22 am: Congress workers celebrate outside the counting station in Ballari. Congress' candidate VS Ugrappa is leading by 1,84,203 votes in the parliamentary seat. 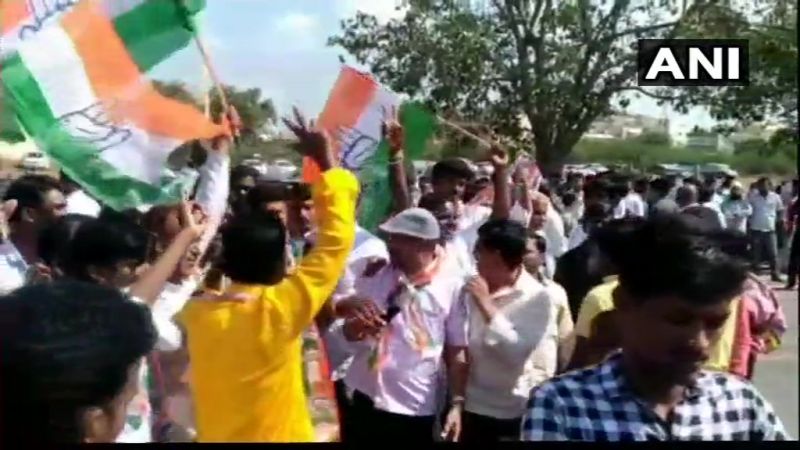 10:30 am: INC leads in Jamkhandi and Ballari, JD(S) leads in Ramnagara and Mandya; BJP leads in Shivamogga.

09:40 am: JD(S)' S Madhubangarappa leads over BJP's BY Raghavendra by 1,414 votes in the 2nd round of counting in Shivamogga parliamentary seat.

09:35 am: INC's Anand Siddu Nyamagouda leads with 9,555 votes in Jamkhandi, Congress' VS Ugrappa leads with 64,000 votes in Ballari and JD(S)' Anitha Kumaraswamy leading with 18,766 votes in Ramnagaram.

09:30 am: Congress' VS Ugrappa leading over BJP's J Shantha by 45,808 votes in Ballari parliamentary seat after counting of votes for round 3.

09:25 am: BJP's BY Raghavendra leading over JD(S)' S Madhubangarappa by 3,906 votes in the 1st round of counting in Shivamogga parliamentary seat.

09:08 am: Congress' VS Ugrappa leading over BJP's J Shantha by 17,480 votes in Ballari parliamentary seat after counting of votes for round 1.

08:43 am: Visuals from a counting station in Ballari.

Karnataka: Counting of votes is underway for #KarnatakaByElection2018. Visuals from a counting station in Bellary. pic.twitter.com/CDvEBxQNjm

08:00 am: Counting of votes begins at counting centres in Ballari and Shivamogga Lok Sabha constituencies.

Wife of Karnataka Chief Minister HD Kumaraswamy, Anitha Kumaraswamy, has been given a virtual walkover as the BJP candidate L Chandrashekhar quit the party to join the Congress just two days before the crucial polling.

Shantha, the sister of BJP leader B Sreeramulu, is in the fray with her main opponent, VS Ugrappa of the Congress.

JD(S) has fielded LR Shivarame Gowda, who will be up against BJP candidate Siddaramaiah.

The Congress has fielded Anand Nyamagouda, son of senior leader Siddu Nyamagouda. He is contesting against BJP's Srikant Kulkarni.

No Tims for new Covid-19 patients