DECCAN CHRONICLE / PTI
Published Nov 6, 2016, 9:03 pm IST
Updated Nov 6, 2016, 9:12 pm IST
The Delhi Police detained the kin of the missing student with many other JNU students who had assembled at the India Gate.

New Delhi: Mother and sister of JNU studentNajeeb Ahmed, who is missing since 23 days, were on Sunday detained when they along with scores of agitating students tried to take out a protest march to India Gate demanding intensified efforts from police in tracing him.

Fatima Nafees, mother of Najeeb, was virtually dragged into a bus by police along with other students when they were on their way to India Gate, triggering criticism from Delhi Chief Minister Arvind Kejriwal who decided to visit the police station. Fatima and her daughter Sadaf, were later released.

Earlier in the day, Kejriwal met President Pranab Mukherjee, and said he has been assured that the President will seek a report from the Home Ministry and the JNU administration on the issue.

"People who were involved in the brawl with Najeeb were questioned by the police yesterday, 22 days after he went missing. That was also a formality. We have apprised the President of the matter. He has assured us that he will seek a report from Delhi Police and JNU in this regard," he said.

The Chief Minister also submitted a memorandum to the President expressing concern over the "worrisome" situation prevailing in JNU. 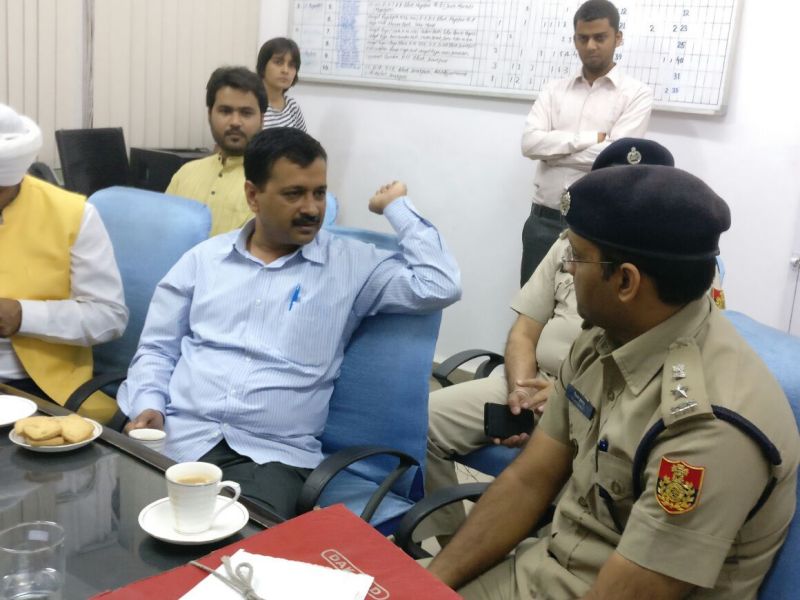 Delhi Police, which blocked all roads leading to the area since afternoon, said permission for the protest was not granted and that section 144 of the CrPC was imposed in the India Gate area because of Chhat Puja.

The protest comes days after Kejriwal and other opposition party leaders visited the university during a protest regarding the missing student. There, in his address to the students, Kejriwal had said "Let's sit on a protest at the India Gate".

Najeeb (27), a student of School of Biotechnology and a native of Badaun in Uttar Pradesh, went missing on October 15 following an on-campus scuffle allegedly with the members of ABVP the night before.

"The shameless Delhi Police, which failed to find Najeeb for the last 23 days, have misbehaved with Najeeb's mother.

She was beaten up and dragged into the police van. His sister is also detained," said Satarupa Chakraborty, general secretary of Jawaharlal Nehru University Students' Union.

Najeeb's family were detained at Mayapuri police station but when Kejriwal reached they had left.

"Police saying she has been sent home in a police van. Will wait here till she reaches home," he tweeted.

He also vented his ire against Prime Minister Narendra Modi saying "It is obvious police doesn't act it own, it follows its bosses. Earlier Congress tortured people taking shelter behind police now Modi is doing the same. Hay lagegi apko (you will be cursed)".

"During protest by JNU students today, none have been manhandled. A group of JNU students along with Najeeb's mother assembled near Archaeological Survey of India building. They were persuaded not to move towards India Gate. They didn't agree and were adamant to move ahead. They all were taken into a bus to Mayapuri police station. Fatima Nafees was duly attended to by lady Police officers and dropped at her place of stay," a police statement said.

Alleging inaction on part of the administration, JNU Student's Union (JNUSU) has been agitating against Najeeb's disappearance from campus.

The protesting students had even confined the Vice Chancellor (VC) and other senior officials in the administrative building for over 20 hours last week. Following directives from the Union Home Ministry, Delhi Police formed a special investigation team (SIT) to trace the missing student.

Another statue of Periyar found smeared with saffron dye