New Delhi: The official Twitter handle of India Post on Wednesday tagged Delhi Chief Minister Arvind Kejriwal in a tweet, berating him for "becoming headlines" in the Pakistani media for "political gains", but later deleted it and issued an apology.

"@ArvindKejriwal you have failed us big time Mr. Kejriwal, for you petty political gains you can become headlines for Pakistani press (sic)," the tweet, which was put out around 12 PM read. 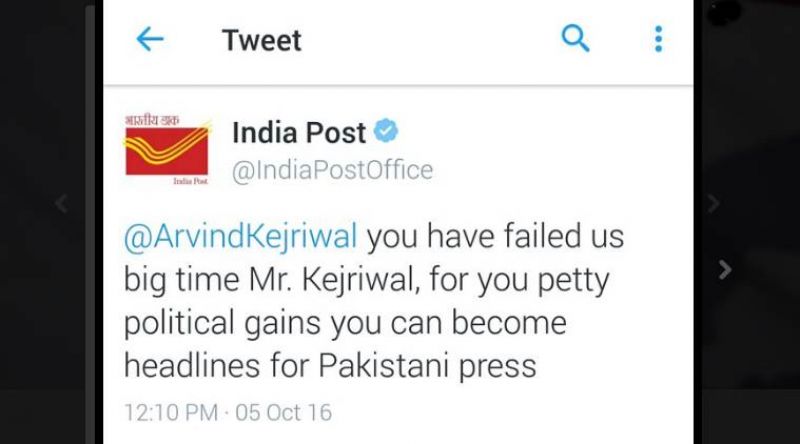 When contacted, an official of the India Post said it may have been the result of "hacking or technical loophole".

"Corrective action was taken as soon as we learnt about it. We have apologised for the tweet. It may be an act of hacking or any technical loophole. We are looking into the matter. India Post does not intend to hurt anyone, which is clearly known to everyone," the official said.

He mocked Union IT & Communications Minister Ravi Shankar Prasad, urging him to give a new phone to the "bhakt" who is being paid for running the department's Twitter handle.

This is not the first time that a government Twitter handle has run into troubled waters. The official handle of Indian Railways had retweeted a critical comment made by a user against Kejriwal on September 8.

The official handle of Digital India had last month shared a peom hailing the security action and killings of civilians in Kashmir. It was later deleted and the person who had tweeted it suspended.

AIR had, through a tweet, taken on Congress Vice-President Rahul Gandhi the same month, while in July, Startup India's Twitter account had shared two tweets targeting journalists and Pakistan.

Nellore centre comes up with ‘high on zinc’ rice variety

121 projects worth 1 lakh crores identified under Sagamala in AP

We will increase forest cover to 33%, asserts CM Jagan

RT-PCR certificate must for those from Kerala, Maharashtra to enter Karnataka