Hyderabad: In a sudden development late on Saturday, Chief Minister K. Chandrasekhar Rao decided to move the Supreme Court against the Centre for imposing GST on work contracts.

Earlier in the day, the GST Council which met in New Delhi, decided to reduce GST from 18 per cent to 12 per cent on ongoing projects such as Mission Bhagiratha, Mission Kakatiya, irrigation projects, roads and buildings. The state government says these are welfare oriented, and should not be taxed. In the previous VAT regime, work contracts were taxed at 5 per cent.

The Chief Minister had deployed his son and minister K.T. Rama Rao to Saturday’s GST Council in place of finance minister Etela Rajendar, who is a member. Mr Rama Rao made a last bid effort to persuade the Centre to give GST exemption. 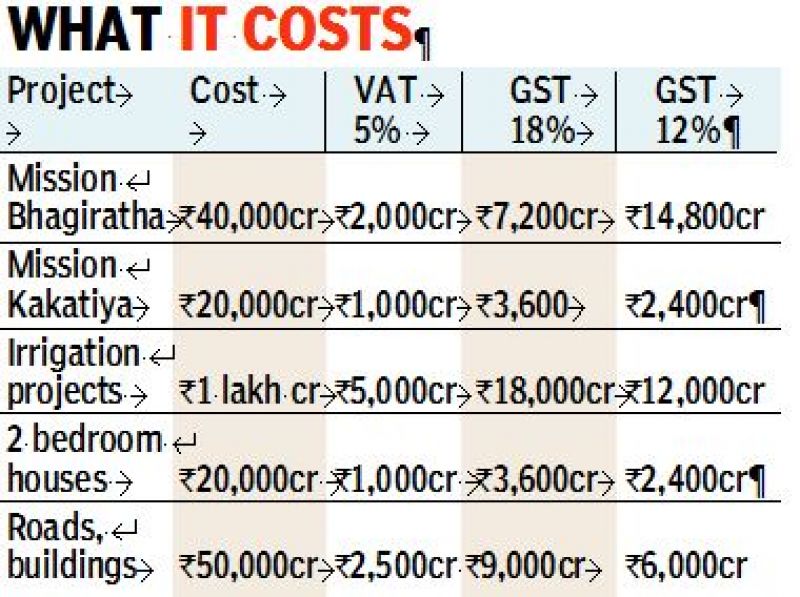 Though the GST reduction announced will save the government Rs 13,800 crore, Mr Chandrasekhar Rao condemned the Council’s decision and decided to write to Prime Minister Narendra Modi expressing his objection on the issue.

The tax burden on the TS government comes down to Rs 27,600 crore from Rs 41,400 crore. Mr Chandrasekhar Rao had written to Mr Modi and Union finance minister Arun Jaitley in June, seeking GST exemption for projects which were taken up in the larger interest of the people.

The decision to move court could end the bonhomie between the BJP and the TRS being witnessed since the Presidential election was announced.

TN Guv bids adieu, says he acted as per law during his stint