Around 500 engineering colleges are affiliated to Anna University and a majority of colleges need to get provisional affiliation to admit students into engineering courses. 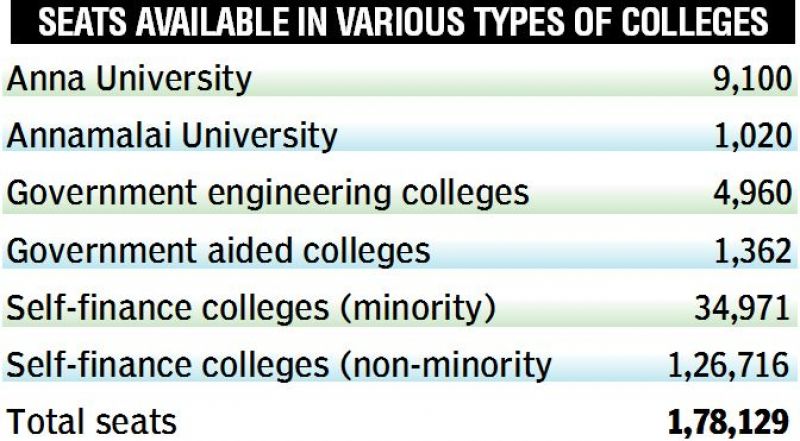 To the surprise of inspection teams from the varsity, 255 engineering colleges lack basic facilities including the faculty members to teach.

Anna University gave two weeks’ time to comply with AICTE norms in regard to the infrastructure and number of faculty members to run the courses.

“Around 200 colleges filed compliance report while 55 colleges could not fix their lapses within the due time. Hence, the university has trimmed 5,940 seats in 55 engineering colleges this year,” a source said.

AICTE has reduced the students-teachers ratio from 1:15 to 1:20 this year. Despite that many engineering colleges did not have required faculty members.

All India Private Colleges Employees Union (AIPCEU) alleged that many engineering colleges are showing fake faculty members during the inspection.

“There is a huge difference between the faculty members shown to Anna University and All India Council for Technical Education (AICTE) by the colleges. Anna University should release the branch wise faculty details in the affiliated colleges for the benefit of the students,” said K.M. Karthik, founder, AlPCEU.

Meanwhile, top academicians said the infrastructure and faculty of more than 1/3rd colleges are absolutely poor. “There was around 10 per cent intake in more than 100 engineering colleges for last four years. These colleges were not able to sustain and they were not even able to pay the salary to their faculty members,” said E. Balagurusamy, former Vice-Chancellor, Anna University. While welcoming the move to reduce the intake in these colleges he said, “Reducing the intake is not enough. The colleges with poor infrastructure, faculty and student strength need to be closed.”

The online counselling is scheduled to be held in five rounds. Tamil Nadu Engineering Admissions (TNEA) has allocated random numbers to 1.59 lakh applicants on Tuesday.

The 10-digit random numbers will be used for breaking the tie where more than one candidate have got same marks. The merit among such candidates will be determined in the order of percentage of mark in Maths, Physics, fourth optional subject, date of birth (elder will be given preference) and the random number (higher value will be given preference).

After assigning the random numbers minister K.P. Anbalagan said, “This year 509 engineering colleges will participate in the online engineering counselling and totally 1,78,129 seats are available.”

Compared to last year, 26 private engineering colleges did not seek affiliation thereby keeping themselves out of the counselling process.

“TNEA will conduct the counselling for 1,020 seats at Annamalai University and 720 seats at the three regional centres including Coimbatore and Tirunelveli,” he further said.