The government agreed to pay arrears to banks in four installments of Rs 4,250 crore each. ( Representational Image)

Hyderabad: Despite good pre-monsoon showers and prediction of good monsoon, farmers have realised that they have very little to celebrate due to crop loan waiver and Debt Relief Act — two measures taken by the government to help farmers.

While the delay in releasing crop loan arrears by the government has led to a situation where banks are denying fresh loans to farmers, local money lenders are also refusing to lend money fearing the tough provisions of Debt Relief Act.

Soon after coming to power in 2014, the TRS government waived loans up to Rs 1 lakh each of 30 lakh farmers, amounting to a total of Rs 17,000 crore. The government agreed to pay arrears to banks in four installments of Rs 4,250 crore each.

While the government paid two installments in 2014 and 2015, the third installment due for this year has not been yet released. With this, banks have stopped renewal of loan accounts of farmers unless they pay the arrears. 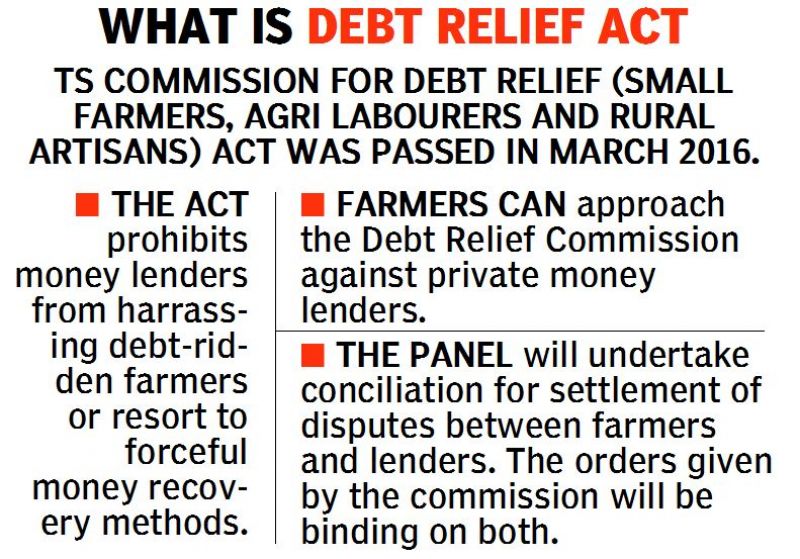 The consecutive droughts in 2014 and 2015 have pushed farmers into indebtedness, resulting in a large number of suicides. The farmers are heavily dependent on loans to mobilise investments for crops.

“We have written to the finance department to release Rs 4,000 crore arrears to banks at the earliest. We are pursuing the case seriously. We hope to resolve  the issue in a week or so,” said Pocharam Srinivas Reddy, agriculture minister.

Traditionally, private money lenders used to be the only alternative for farmers, especially small and tenant farmers,  since banks deny loans to them.
However, they are also shying away from giving loans, fearing Act.

Chief Minister K. Chandrasekhar Rao had promised in the Assembly to make one-time payment of balance Rs 8,000 crore arrears to banks at one go if the Centre raises state’s borrowing limit from 3 to 3.5 per cent.

The Centre approved this in April, giving scope for government to raise over Rs 4,000 crore additional loans but the Chief Minister has failed to keep his promise.