Kochi: Chief Minister Pinarayi Vijayan’s noting on the file on January 30, 2018 related to the regularisation of the admissions in Kannur and Karuna medical colleges calls the bluff about the refrain of the government and the opposition that the move was aimed at “safeguarding the interests of meritorious students who got trapped in the machinations of the erring management”.

In fact, the government’s aim was to protect the admissions of all the students which were cancelled by the Admission Supervisory Committee, documents accessed by DC show.   The Chief Minister directed the health department to “prepare a note for the Cabinet meet on January 31 to decide whether the Competent Authority can be entrusted to lawfully take a decision after correcting the lapses pointed out by the law ministry.” And there is a story behind those ‘lapses’.

Competent Authority B. Srinivas, then principal secretary (health), went about preparing the list of students who lost admission for no fault of theirs with the help of the Commissioner of Entrance Examinations “as per laws and orders in force applicable for the academic year 2016-17” as mandated in the ordinance. He prepared a list of 44 among the 137 applicants from Kannur Medical College and 25 from 31 students from Karuna Medical College. He sent the report, along with a recommendation to take action against the management of Kannur Medical College. It was endorsed by the additional chief secretary (health) Rajeev Sadanandan. 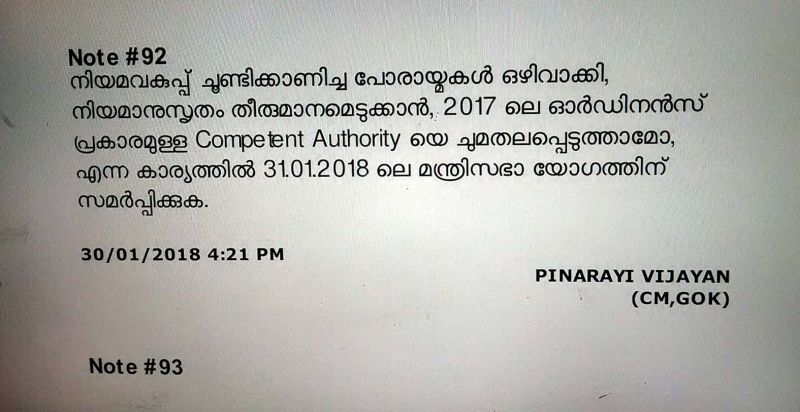 Law secretary B.G. Harindranath, whom legal experts say has no authority to sit in judgment over the report of a Competent Authority acting on behalf of the government, picked “lapses” in the report saying the Authority had not understood the ordinance properly and that he had no “material evidence” to take action against the erring management.

The Chief Minister, documents say, sided with the law secretary who identified the “lapses” which in fact were his recommendations to exclude 93 students of Kannur Medical College and six students of Karuna Medical College who would not have got admission even if the college had produced the documents on time and also to take action against the management. “If the government’s intention was to protect the meritorious students, then it should have gone ahead with regularising the admissions of those 69 students,” said a senior government official seeking anonymity. “Instead, the government trashed the CA’s report and regularised 118 students of Kannur and 31 students of Karuna. This betrays the government’s real intention.”

Kerala did a disastrous thing by electing Rahul: Ramachandra Guha

Unplanned development at Badangpet is its biggest woe