Hyderabad: The State Election Commission till Tuesday seized a whopping Rs 111 crore. As of December 3, the EC said that it had seized Rs 94.17 crore in cash out of which the police department seized Rs 71.67 crore and the Income Tax Department officials seized Rs 22.50 crore. The EC had also seized 4.79 lakh litres of liquor worth Rs 9.62 crore and Rs 7.77 crore worth of other items such as gold, silver, ganja and gutka.

Chief Electoral Officer of Rajat Kumar pointed out that the cash seized this time was already Rs 28 crore higher than the total amount seized during last elections which had covered united Andhra Pradesh. 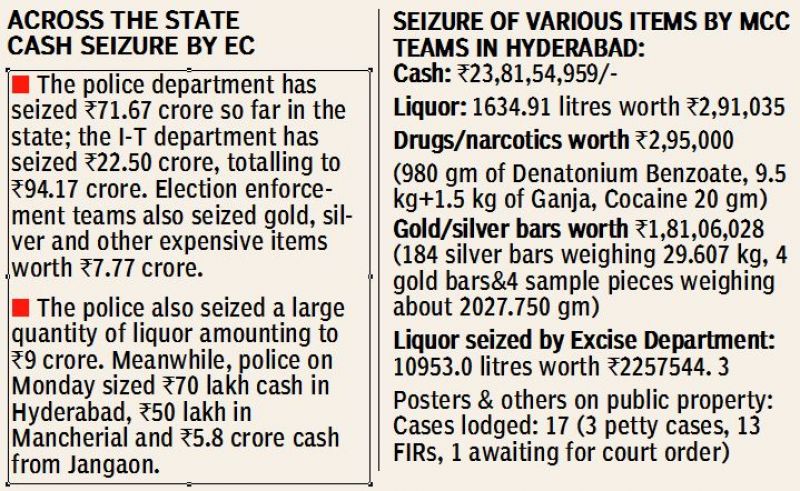 Meanwhile, Hyderabad city is all geared up for the polling on December 7. Greater Hyderabad Municipal Corporation Commissioner and District Election Officer M. Dana Kishore on Tuesday said that the civic body had already made arrangements for the polling day. In Hyderabad, a whopping Rs 23 crore was seized.

Mr Kishore said that after completion of filing of nominations and the withdrawals, a total of 313 candidates are in the fray.

He said utmost care has been taken for the printing of ballot papers to ensure that there are no mistakes. As many as 96, 784 electors have been enrolled  to the electoral roll in the supplement roll.