The World Bank felt that the political will, visionary leadership and result oriented approach of the State Administration, headed by Chief Minister N. Chandrababu Naidu, helped the state in achieving the first rank with an overall score of 42.01, said A. Chandra Sekhara Reddy, MD, Andhra Pradesh State Energy Efficiency Development Corporation & Chief Executive Officer (CEO) of the State Energy Conservation Mission (SECM), said at a media conference in New Delhi on Friday. AP was followed by Rajasthan (41.89), Karnataka (39.34), and Maharashtra (39.29). 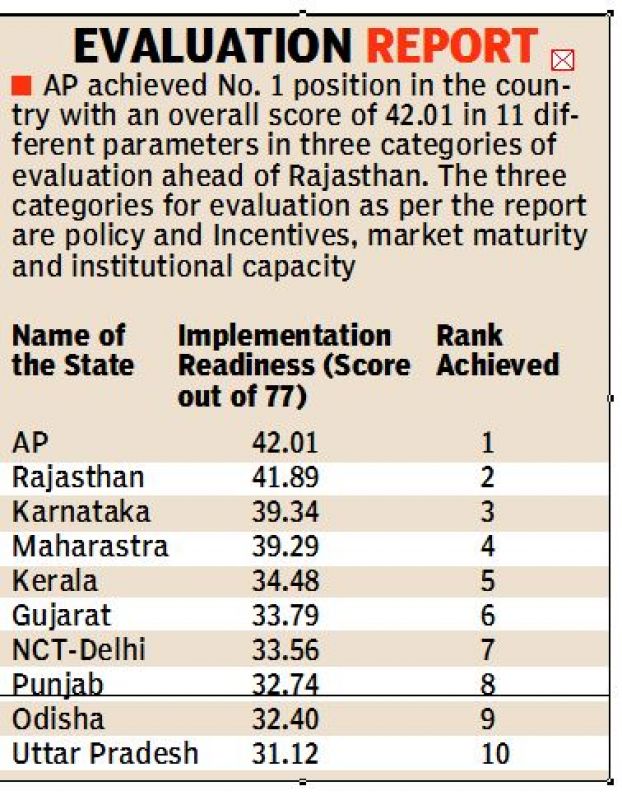 The World Bank is impressed with the effective implementation of energy efficiency and energy conservation activities in AP, with an assessed achievement of around 650 MW of avoided capacity and about 1,500 MU of annual energy savings within a span of two years by adopting emerging LED technology in domestic and urban street lighting.

The AP Chief Minister has become the champion of energy efficiency, said Subash Chandra Garg, executive director, World Bank, while launching the report during the ongoing international conference on Advancing the Global Transition to Energy Efficiency as the ‘First Fuel’ with Demand Side Energy Efficiency (DSEE) in New Delhi. The conference was organised by the World Bank and Energy Efficiency Services Limited (EESL)-India on November 4 and 5.

In this context, principal secretary (Energy, Infras-tructure & Investment and CRDA) Ajay Jain, who was invited by the World Bank and Govern-ment of India as a special guest to the international conference, said that Mr Naidu is keen to make Andhra Pradesh the most energy efficient state in the country with his novel initiative, ‘AP Energy Star Programme’.

AP has carved a niche for itself and become the front runner in energy efficiency, said Saurabh Kumar, managing director, EESL.

Simon Stolp, energy expert to the World Bank South Asia along with others released a poster with regard to energy efficiency potentiality in Amara-vati during the conference.

TRS hopes to get EC nod for BRS after Gujarat, HP poll results