Hyderabad: The e-challans being issued to motorists for violation of traffic rules involving penalties but not imprisonment have a validity of only six months, petitioner Dr C. Lakshmi, has contended.

Dr Lakshmi of Prashanthnagar, Vanasthalipuram, filed a case challenging the power of traffic cops to issue e-challans and their validity period. She said she was asked to pay pending challans issued since 2012, of which she said she was not aware.

With payment for lakhs of e-challans worth nearly Rs 150 crore pending in the city, traffic police is taking a close look at the provisions of CrPC, Indian Evidence Act and Motors Vehicles Act.

Traffic cops said Section 468 and 469 of CrPC deal with validity of e-challans. Police officials said that Section 469 puts the validity as six months, but this period starts after the police officer identifies the violator.

“All those who have not turned up to pay their long pending e-challans have to pay it sooner or later as e-challan is based on the photograph or video footage of the vehicle registration number. The cop does not have the identity of the driver,” said deputy commissioner of police (traffic) A.V. Ranganath.

Section 45 A of the Indian Evidence Act allows photograph and video footage to be considered as proof. “We will submit our counter and the court can take a decision,” Mr Ranganath said. 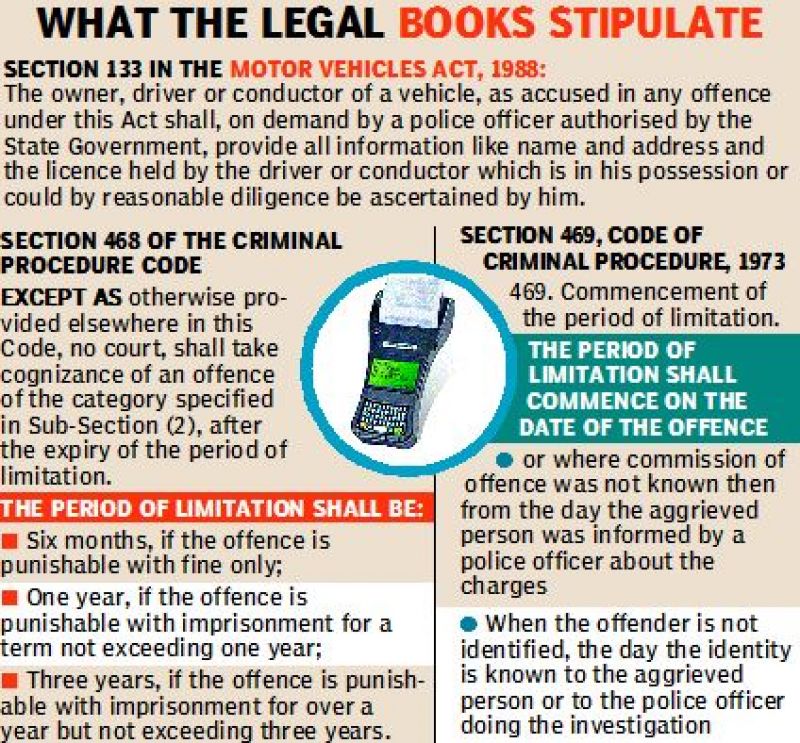 What the legal books stipulate.

Upon receiving Dr Lakshmi’s petition, senior traffic police officials went through the Criminal Procedure Code, Indian Evidence Act and Motor Vehicles Act with experts. The traffic police has  to submit a counter in the court before November 18.

Traffic police issues notices with e-challans to motorists under Section 133 of the MV Act which says it is the duty of the vehicle owner to provide the identity of the driver who violated traffic rules.

In her affidavit, Dr Lakshmi said a traffic police official approached her while she was in her car and told her she had three pending challans amounting to `1,805. He said she should pay the penalties or the vehicle would be seized.

Dr Lakshmi said she was not aware of any challans pending against her vehicle. She said a driver drives her car most of the time and asked why should the owner be penalised for the driver’s mistake

Dr Lakshmi was issued with three challans including one for jumping a signal at Trimulgherry, wrong parking and disobeying orders.

International travellers under surveillance for Omicron

End of an era in Telugu politics