Polluted lakes are a bane to the city, a problem that we all recognise but few are inclined to fix. Dr Shobha Anand Reddy, however, is not among those who choose to walk away – her efforts have resulted in the rejuvenation of the 100-acre Rachenahalli Lake. Today, thousands of locals flock to the lake, located in Jakkur, to make use of its beautiful walking paths, gazebos, benches and a multi-purpose yoga platform.

Shobha, the managing trustee of the foundation, Jalamitra-Guardians of Rachenahalli, has been instrumental in the lake’s facelift, working with various stakeholders to revive and maintain it. The effort has meant giving up a regular job, weekends and personal time to be at the ailing lake, which, at the time, was filled with sewage, weeds, garbage and served as an open defecation zone for people in the area. 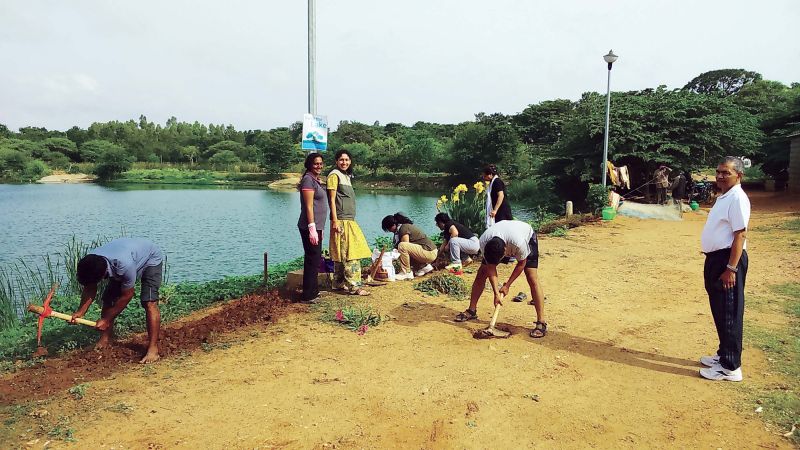 At the time, Shobha worked as an additional director at the Mahatma Gandhi Institute for Rural Energy and Development (MGRED), with senior IFS officer Punati Sridhar serving as executive director at that time. On September 18, 2014, Shobha made her first visit to Rachenahalli Lake, for an unrelated cause, as it happened. That day happened to be World Bamboo Day and Shobha had arrived there to plant bamboo trees to mark the occasion. There was no room to enter, even. Human waste and overgrown weeds made it impossible for a person to stand at the lake even for a few moments, Dr Shobha recalls. “That was my first motivation.”

The lake’s outlet had been blocked off by a powerful building company. After heavy rains, water would swell in the storm water drain, which was cut off from the larger network. Three children had drowned there. “I felt it was important for us to do something about it,” she says. Shobha tied up with schools and colleges to get the momentum going, and rallies were held to raise awareness. The initiative was made public and by August 2015, calls had been made for volunteers.

“We started spending more time at the lake but only three or four people had come forward at that time,” Shobha says. “I started spending my weekends there, though.” Even if she had to work alone, she did so, single-handedly clearing the profusion of parthenium. The  BBMP noticed her efforts and began sending help, while the local school also decided to join Shobha in her efforts. Sewage flowing into the lake was successfully diverted.

In the mean time, the executive director of MGRED was transferred. The new officer in charge was not interested in saving the lake, however. “I challenged him and ended up quitting my job because the campaign to save the lake had gained momentum and public support. Things were falling into place and being the person who had started the movement, I felt it was my duty to complete my task,” Shobha explains.

In 2016, the Jalamitra Trust was formed. Former MLA Krishna Byregowda helped to get the lake transferred from the BDA to the BBMP. He also directed the BDA to complete the unfinished work on the lake. An MoU was signed between BBMP, United Way Bengaluru and Jalamitara. United Way Bengaluru helped raise CSR funds. Shobha continued to shoulder the bulk of the responsibility, coordinating work between different government agencies. Slowly, the park on the lake’s bank began to take shape. Benches were placed and the walkway was completed. BBMP deployed home guards. A multi-purpose yoga platform was also constructed. Today, she continues to the advise the leaders of the Jalamitra trust, which is headed by a local, Naveen and Anbarasan, a Microsoft employee.

The challenge before Dr Shobha now is water quality management, as treated water still finds its way to the lake from surrounding houses. The daughter of a judge, her family moved to wherever her father was transferred on duty, which included Tumakuru,  Bidar and Bijapur in Karnataka. The contrasting climate in South and North Karnataka drew her attention towards the environment. She went on to complete her BSc and MSc in Environmental Science and joined Mount Carmel College as a lecturer, where she stayed for more than a decade.

Still, she was restless, her passion for social change ultimately resulting in her quitting her job.

Today, seeing Rachenahalli Lake is a cause for pride and joy. “There are no words to explain the satisfaction I feel. If 10 percent of the people take the initiative like this, we will see major changes in society,” she says.