No automatic refund for cancelled trains during floods

The railway passenger associations demanded the refunds in such “genuine” cases should be made without any further delay.

Kochi: Many passengers who booked their tickets online during the floods, from August 15 to 21, have ‘lost’ their money after Railways failed to provide automatic refund for cancelled trains. 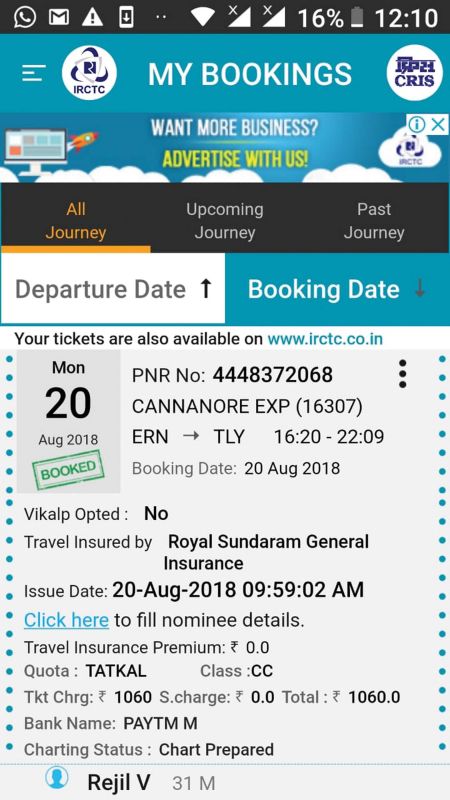 “I had booked a ticket to travel from Ernakulam Town to Thalassery in Cannanore Express scheduled on August 20. However, when I reached the railway station, I was told the train was cancelled due to the flood situation,” said Mohanan Mangathusseril, a native of Chitoor in Ernakulam. His ticket ID was 1465573 and the PNR number 4448372068.

“Usually, refunds for cancelled train tickets get credited to the customer’s account. But I am yet to get the refund even after 13 days,” he charged.

Similar is the case with many other passengers. However, the Railways made it clear that the refund would be allocated only if the customer cancels his ticket on the day of travel itself.

“However, given the emergency scenario, we’ve extended the deadline to August 29 for cancelling the reserved tickets in cancelled trains with the date of travel from August 17. Now there is no provision for refund as per the Railway rules,” a senior railway official said.

The railway passenger associations demanded the refunds in such “genuine” cases should be made without any further delay. “The Railways should pressurise the IRCTC to refund the amount since the trains were cancelled and the same was not due to the fault of passengers. They should take into consideration the emergency situation due to floods,” said P. Krishnakumar, general secretary of Thrissur Railway Passengers Association.