Chennai: Some stones can produce as melodious a note as musical instrument would and probably realising this, the shilpis of the ancient temples in Tamil Nadu ensured these stones were showcased in the shrines as musical pillars.

The ancient Sri Sthanumalayan temple in Suchindram in Kanyakumari district, the Meenakshi Sundareshwarar temple in Madurai, theAiravateshwara temple of Darasuram, and Adhinathar temple at Alwartirunagari are among the temples in Tamil Nadu that have fascinating musical stones which produce sapta swaras when tapped. Chennai or its neighbouring areas however don’t boast of such exquisite ‘musical’ art.

“Though it may baffle many of us now, the execution of the work, especially the way the musical stones are carved into pillars and arranged shows not only the superior workmanship but also their knowledge and use of stones in temple architecture,” an official at the Archaeological Survey of India (ASI) said. Much of the masterpiece work date back to the Chola, Pandya and Chera era. Similar work could be noticed during the Vijayanagar rule. Interestingly, the musical pillars found in temples are conspicuous by their own design and construction.

In the Airavateshwara temple, Darasuram, about 35 km from Thanjavur, which is a living Chola temple, the flight of ‘musical steps’ which greet visitors at the gate, is a sight to behold. Each step, it is said, produces a musical note. But they are protected with a metal grill from vandalism.

The Nellaiappar-Kanthimathi Ambal temple in Tirunelveli, the musical pillars are so arranged that vibrations are produced from the neighbouring pillar, when one pillar is tapped. There is a central pillar having 48 small cylindrical pillars of varying girth, around.

At the Sri Sthanumalayan temple at Suchindram near Nagercoil, there are four musical pillars and the central pillar is surrounded by 24 or 33 small pillars. In his book on the temple, K. K. Pillai writes, “a striking feature is that all the pillars of each group, together with the exquisitely carved turret at the top of each group are chiselled out of a single rock of granite. A tap on each of the pillars in a group produces different sounds”. In the Adhinathar temple at Alwartirunagari, two musical pillars could be found. 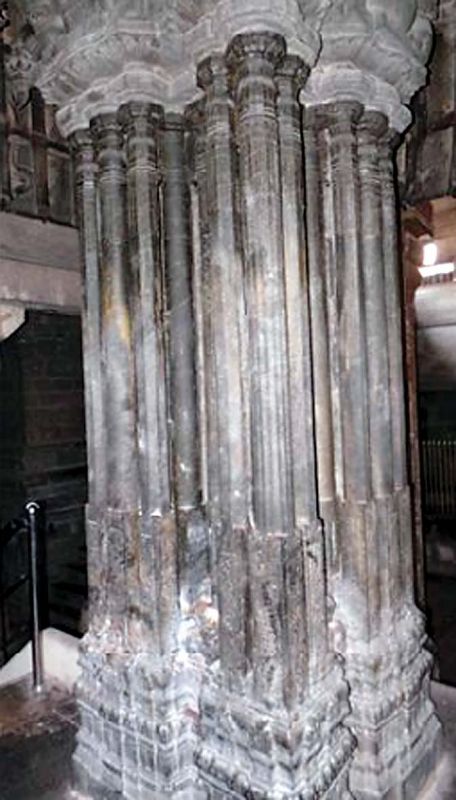 “Stones, according to the Shilpa Shastra, are masculine, feminine and neuter depending on their sound and colour. Male stone produce the tinkle of bronze bells when tapped while female stones produce the tinkle of bass. The neuter produces a dull sound. Male stone is used to carve deities of Lord, while female stone is meant for making images of Goddess and neuter stone is used for the pedestal or in making ornaments,” N. Bhaskaran, a temple architect and student of Ganapathy Sthapahi, the renowned traditional architect who made the 133-feet Thiruvalluvar statue in Kanyakumari and the Valluvar Kottam here, says.

The Shilpis displayed a remarkable skill and ingenuity in crafting “musical” pillars, which when struck at right spot produce mellifluous octaves. Though it may be difficult to identify the source of such stones, these musical pillars are of granite and charnockites. They come in different girths and volumes to produce the right octaves, he adds.Unlike the modern architecture, the ancient temples are geometrically, scientifically, and symbolically built.

Boats sail in Chennai as fear of floods shoot