The entrance of the Veerabhadra Swamy temple at Bonthapally and Devotees walking on the fire.

Hyderabad: The ancient Bhadrakali Sametha Veerabhadra Swamy temple at Bonthapally in Sangareddy district is a unique one. Fire walk is conducted at this place of worship round the year for devotees to fulfill vows.

Located in Veerannagudem gram panchayat of Gummadala mandal in Sangareddy district, about 40 kms from Secunderabad on the Narasapur road, the temple attracts a large number of devotees throughout the year, especially from the twin cities as well as other parts of the country.

In fact, Lord Veerabhadra Swamy, a manifestation of Lord Shiva, is the family deity of many Veerashaiva Lingayat, Vyshya and other communities.

The Kakatiya kings had constructed several Shivalayas and this is considered to be one of them. However, there is no evidence to show the architecture of that era. 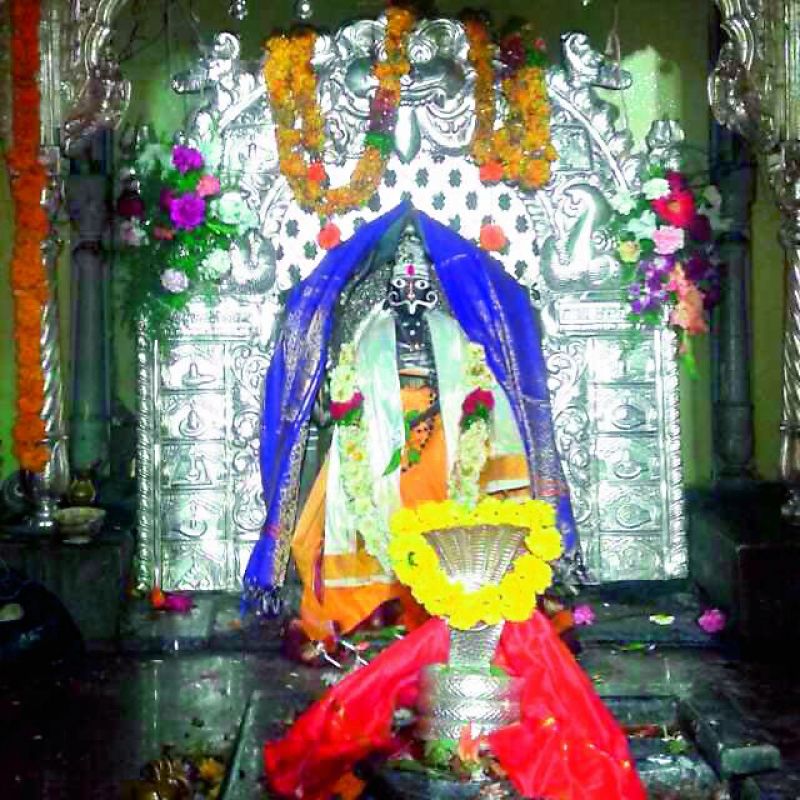 The idol of the Veerabhadra Swamy

“Though there is no shilasasanas of Kakatiyas, the temple is certainly of the Kakatiya era. Devotees of all communities have great faith in Lord Veerabhadra Swamy,” says Shivanagula Swamy, head priest of the temple.

Bonthapally village was once located in a thick jungle and even today nearby Narasapur is a forest belt. Devotees, in those days used to visit the temple on bullock carts and had to wade through rivulets. 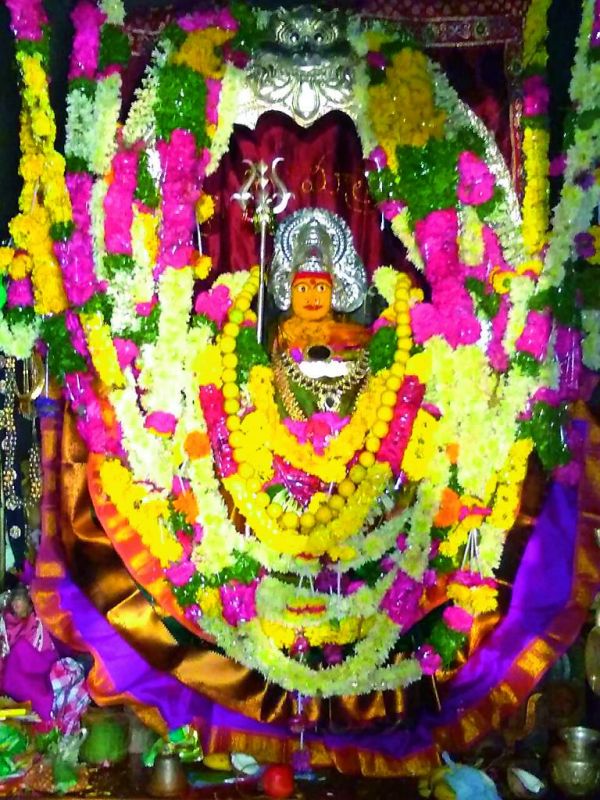 Presiding deity Lord Veerabhadra Swamy’s idol is made of black granite. He carries a sword, trishul in his right hand and “Gadha”, Damuru in his left hand. A Shiva lingam is located in front of the idol, where devotees perform abhishekam.

There is a temple for his consort Bhadrakali behind him, which is also unique as there are eight Sri Chakras in front of the goddess, where devotees perform kumkuma puja every day.

Newly married couples seek blessings from the God and Goddess, offer hair, rice,  Ganda Deepam, Prastanam (part of the marriage ceremony of Veerashaiva Lingayat and some other communities), Bilwapatri among others.

Legend has it that some traders were travelling on bullock carts past this forest area years ago. The bullocks suddenly stopped and refused to move further.  The traders were surprised and looked for wild animals but in vain. They decided to take a break. One of them dreamt that there was an idol of Veerabhadra in a snake pit and that it should be unearthed, cleaned, installed and worshipped. It would shower them with money and also bring them good luck. When the trader shared his dream with the others, they searched for the pit and finally unearthed the idol and installed it over there.

From a small temple, it grew in size, rebuilt as devotees thronged there from all over the state and country. Traders from Secunderabad and other places constructed choultries around the temple for the devotees to stay, some of which are in a dilapidated condition.

New choultries were constructed nearby by the Vyshya community and the Veerashaiva Lingayat Welfare Trust, where free food was served to devotees.  “We provide affordable accommodation and free breakfast, lunch and dinner to devotees daily,” says Madapu Veeramallesh, founder and vice chairman, Telangana Veerashaiva Lingayat Federation.

On the eastern side of the sanctum sanctorum there is a 24 pillar mandapam. Besides the idol of Lord Veerabhadra Swamy, there is Kasi Vishweshwara Lingam, mula vigraham, utsava Vigraham, Ganapathi and Nandi idols.

The Bonthapally Veerabhadra Swamy temple is well-known for the unique (agnigundam) fire walk that is conducted round the year.

“Devotees to fulfill their vows conduct the fire walk. We make arrangements on payment of `1,116. It is done round the year, but more commonly on weekends. The temple is famous for Laksha Bilwa Archana, Shravanamasam festivities in August and September, Nitya Kalyanam, Abhishekam, Kumkuma Archana, Annapuja etc. Temple Jatara is conducted in Palguna Masam —March/April,” Matam Veeresham, executive officer, Veerabhadra Swamy Devasthanam told this newspaper.

The Devasthanam, which earns a revenue of `1 crore annually, is planning to construct a new Prakara Mandapam (massive compound with wall and gopurams) on the lines of Srisaila Devasthanam soon.

Ugadi, Vaishaka puja, Lakshapatri puja, Deepotsavam, Mahashivaratri and annual jatra, rathotsavam and other major Hindu festivals are celebrated in a big way at the temple. Bonthapally was once a hub for wooden toys also.

Considered a warrior God, Veerabhadra Swamy, whose temples exist in many parts of Telangana, Andhra Pradesh, Tamil Nadu, Karnataka and other parts of the country, was worshipped by rulers and soldiers during wars.

Lord Shiva took the fearful form of Veerabhadra to destroy the sacrifice of Daksha Prajapati and to check his arrogance. His consort is Bhadrakali.

There are many legends about Veerabhadra. According to one story, the goddess also known as Sati was born as Dakshayani to Daksha, son of Lord Brahma.

A great devotee of Shiva, Sati, was keen to marry Shiva. But her father disliked Shiva and invited many for the swayamwar barring Shiva.

Sati said to have thrown the garland in the air chanting Shiva and it landed around the neck of her chosen suitor. Daksha gave into her demand and married her off to Shiva, but severed ties with them. Daksha later conducted an Ashwamedha Yagna, which Sati attended despite Shiva not being invited.

Daksha spoke against Shiva and humiliated her. Unable to bear the humiliation, she jumped into the fire and immolated herself. A furious Lord Shiva went wild, plucked a strand of hair and produced Veerabhadra. Fearsome Veerabhadra went to Daksha and slayed him. When his wife begged for his life, he placed the head of a goat on him and brought him back to life. Daksha regretted his action and became a devotee of Shiva.