A Mercedes car spotted at a waterlogged road in Mumbai. (Photo: Twitter/@PhalinShah)

Mumbai: Chaos prevailed in Mumbai on Friday as incessant rains lashed the city and areas around it, with choked road, cancelled trains, waterlogged streets causing a nightmare for many.

All arterial roads in Mumbai, from north to south and east to west, were jammed with traffic since morning.

A high tide is forecast later in the day and heavy to very heavy rains are likely to lash Konkan and Central Maharashtra regions in the next 24 to 48 hours.

"The suburban services on Up and Down slow lines have been suspended between Chhatrapati Shivaji Terminus (CST) and Thane due to waterlogging at Sion, Masjid and Sandhurst Road stations because of continuous heavy rain," a Central Railway spokesman said.

"The main area of waterlogging was reported near Sion station where tracks were submerged upto 5-7 inches and to avoid any untoward incident, the train operations were halted between CST and Thane stations," he said. 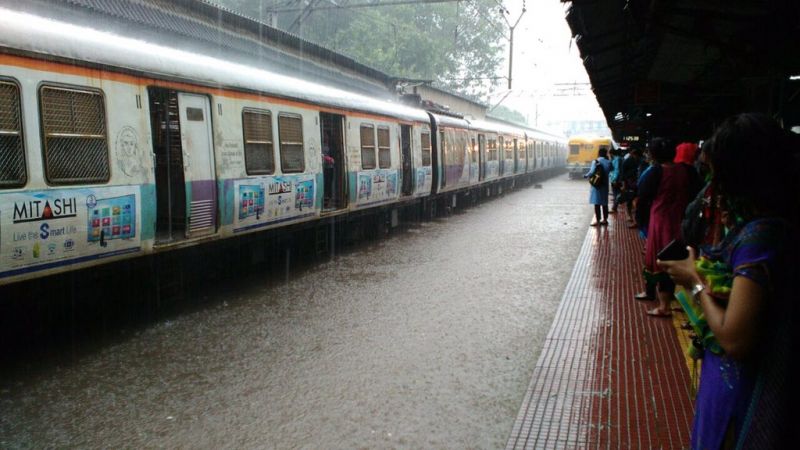 Local trains services were also hit due to the heavy rains. (Photo: Twitter)

Local train services were also affected and while some trains on the Central line were cancelled in the morning, most of them were running hours behind their schedule. The Western Line services were not disrupted as much. Flights too were delayed.

Local buses were, however, running and the administration pushed in a few more to help commuters.

The Met Department had alerted Thane and Navi Mumbai municipal corporations on Thursday about heavy rains for the next 48 hours.

The National Disaster Response Force (NDRF) is also on high alert in the state due to the prevailing situation.

Land resurvey for first time in the country is major reform: CM Jagan

Over 1.79 Lakh fresh Covid infections in India, highest in 227 days

Third wave will have sharp rise in Jan end, but sharp decline in mid-March: Expert