At 13.5K cases, Karnataka chikungunya capital of the country!

Bengaluru: Karnataka is the repository of chikungunya in the country, with the state reporting 23% of all cases in the country in 2016. Cases of the debilitating viral fever have been showing a worrying increase, even as other states which had big outbreaks over the last few years showing steep downward trend.

But over the next three years, Karnataka took a quantum leap, and in 2013, it was at the top spot with 5,295 cases, which were nearly double the previous year's numbers. Andhra Pradesh recorded 4,827 cases and Gujarat 2890 cases, as against its 1,317 cases the previous year. While the other states showed static or low growth, Karnataka's neighbour Tamil Nadu showed remarkable progress. From 5,018 cases in 2012, it brought it down to 859 in 2013.

2014 was even worse for Karnataka. The reported figures went up to 6,962, while its neighbours did remarkably well. In Andhra Pradesh, cases came down almost 75 per cent, at 1,359, while Tamil Nadu's was even better at just 543 cases.

It went from bad to worse for Karnataka in 2015. The figure jumped almost three times to 20,763 from 6,962 the previous year. At the same time, Andhra Pradesh nearly halved its reported cases at 817, and Tamil Nadu's reported 329 cases.

In 2016, Andhra Pradesh's reported cases showed a very low rise at 934. Tamil Nadu's cases came down to an astounding 72! Karnataka managed to bring it down 13,570. 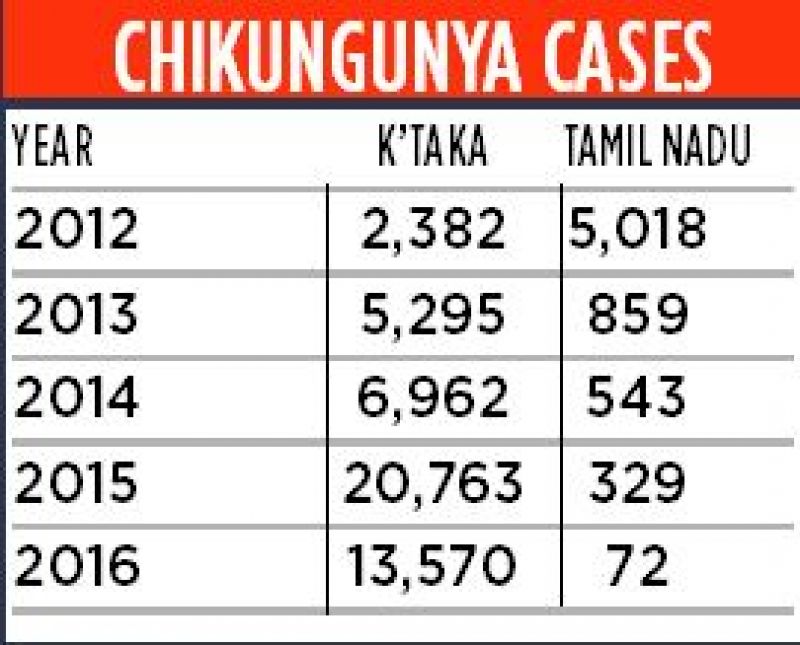 It has remained on top of the chikungunya chart in the country for the last four years. Even in 2016, when North India saw a major epidemic of the fever, Karnataka refused to yield its first place, according to the figures available from the National Health Profile 2017, produced by the Central Bureau of Health Intelligence (CBHI), which functions under the Director General of Health Services in the Ministry of Health and Family Welfare.

A doctor from NMPC Hospital told Deccan Chronicle, "Since 2014, we have noticed a steady rise in numbers of Chikungunya patients coming to our hospital."

Dr Manohar, consulting physician at Manipal Hospital, said that it was not just chikungunya, but also dengue that has been showing a steady rise. "In the recent past, we have seen an increase in chikungunya and dengue cases," he said.

Pedavegi SI suspended after suicide of eloped girl, her mother