NEET exam centres not nearby for many: aspirants

DECCAN CHRONICLE. | R. VALAYAPATHY
Published May 5, 2018, 2:31 am IST
Updated May 5, 2018, 2:34 am IST
Only a few of the medical aspirants have been allotted centers closer to their towns like Namakkal and Tiruchy.

Tiruchy: A large number of candidates taking the NEET exam for medical/dental colleges admission from the central districts of Tiruchy, Karur, Perambalur, Ariyalur, Pudukkottai, Tiruvarur, and Nagapattinam districts, are thoroughly disappointed over the allocation of exam centers at faraway places like Chennai, Coimbatore, and Ernakulum in neighbouring Kerala.

Only a few of the medical aspirants have been allotted centers closer to their towns like Namakkal and Tiruchy, while many others have to travel far for their respective exam centre including Kochi, said several aspirants.

Nidhish, son of an auto-rickshaw driver of Tiruchy expressed displeasure at his NEET exam centre being at Ernakulam, a long distance to travel from here. He has secured 480 out of 500 marks in his 10th examination, and hopes to do well in Plus-2 exam also this year. He is hopeful of cracking NEET too, but for the bothersome travel ahead of him to take the exam.

From a family of slim means, Nidhish's father is “confused” whether he should accompany his son for the NEET exam at Ernakulam. Moreover, due to the summer travel rush, train ticket reservation eludes the poor boy. “Can't even buy under ‘Tatkal’,” says Nidhish, adding, the Rs 1,000 travel.

Meanwhile, the city-based ‘Aim to High Trust’ has come forward and announced through Facebook and WhatsApp social network that it will meet the entire travel expenses of poor and downtrodden students who  would have to travel to faraway centers to take their NEET exam, said the trust's founder, R. Mohan.

He told DC that so far more than ten candidates have approached them from different parts of Tamil Nadu including Tiruchy and they assured them that the trust will bear the two-way travel cost for both the candidate and his/her parent.

He said this apart, the trust members are spread across the country including a few Northern states like Rajasthan, Kerala, etc., adding, the trust members from those places have expressed their willingness to help NEET candidates travelling out of Tamil Nadu for the exam this year.

On May 6, Mr. Mohan said the trust members will be present at a NEET examination centre at Kendriya Vidyalaya school near the Ordnance factory premises here, and arrange breakfast and refreshments to both the candidates and parents who accompany their wards.

Kerala to set up help desks to assist TN students
To help the Tamil Nadu students who will appear for NEET in Ernakulam and other centres, the state government will set up help centres at railway stations and bus stands, Kerala Chief Minister Pinarayi Vijayan said. “The state government officials also will arrange boarding and transport facilities for the students to help them reach the exam centres,” he announced.

Meanwhile, Tirunelveli district collect Sandeep Nanduri said the district administration will arrange special buses for Tamil Nadu students who are allotted centres at the neighbouring state. A batch of students has left for Kerala on Friday evening from Tirunelveli.

CBSE is totally insensitive, says Educationist Prince Gajendrababu
From day one what the CBSE did on this issue is totally insensitive towards the students and unjustifiable. How can the CBSE decide there would be only 10% increase in the NEET applications from the state, that too even before calling for applications?  The Supreme Court was informed last year that nearly 3 lakhs students are studying biology in the state.

How come the board did not expect the maximum number of applications for NEET from Tamil Nadu? It has not shared any details regarding the NEET exam with the state government. It could have immediately announced that it would appeal against the HC order to avoid confusion among the students. A division bench of High Court has given the clear direction and the students believed in that they could write exam within the state. But after waiting for nearly a week, the CBSE went to the Supreme Court. The SC should have asked CBSE about the difficulty in accommodating 1,500 students additionally within the state. Is it difficult for the board to accommodate one additional centre within the state?

CM announces financial assistance for students
The state government has announced financial assistance for the students who are set to write NEET exam from outside the state. “The state government will give travel allowance for the students who will write NEET exam outside the state and also for one person who accompanies them. They will get the fare of the second class train ticket and for other expenses, the government will provide Rs 1000,” Chief Minister Edappadi K.Palanisami said in a statement on Friday.

“They can get the amount from CEO by showing the copy of the NEET admit card or the copy of their school ID card. They can take the amount as advance or after writing the exam they also can get reimbursed,” he said. The Chief Minister also advised the students to contact helpline 14417 for any assistance. 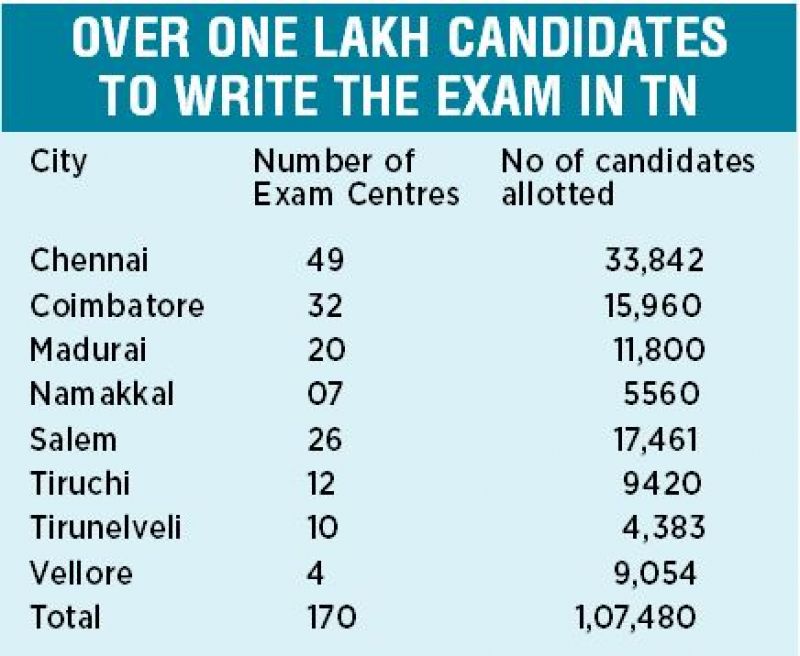