An inconsolable Rajesham after the incident.

Hyderabad: It was a tragic home-coming for Rajesham, who was met by news of the tragic death of his wife and two children in an accident while travelling to the airport to pick him up.

Rajesham had first gone abroad more than a decade ago and came back after two years. Since then, he has been going to Qatar for work. Every time he came home his luggage would be packed with eatables and toys for his kids, but this time he had plans to buy a bicycle for his son Shravan.

Speaking to this newspaper, Rajesham said that he fell ill a month ago and was in hospital for the past two weeks. Though he improved, he felt that instead of working abroad and earning well but falling sick often, it was better to be with the family and have a normal life. 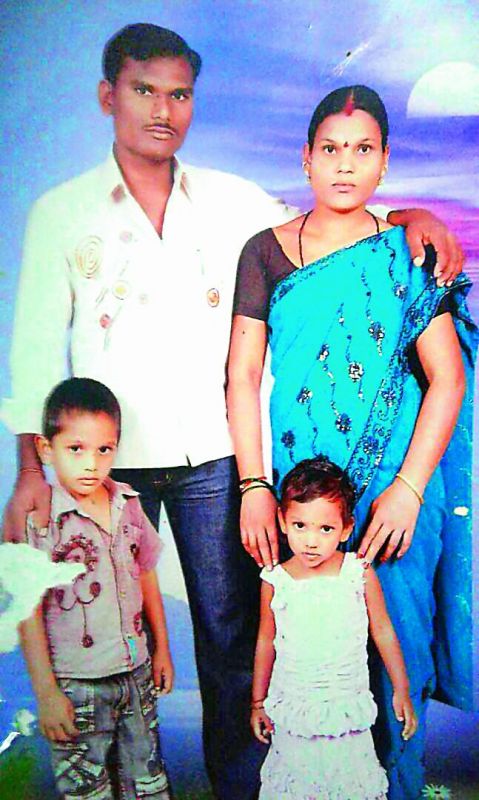 The family in happier times.

“I could not study much, but I wanted my kids to study well. For that purpose I went abroad. But I thought I will be with my family and can look after them and came back. But my family who spoke to me before I boarded the flight are no more just after a few hours,” he said.

He remembered how his kids told him to fly safe before boarding the flight. He did not want them to come to the airport, but they insisted.

“When I told my kids to come safely and don't trouble their mother during the journey, they told me to be safe during the flight and they will take care of their mother,” he said sadly. Rajesham’s brother-in-law, his wife Sattavva's younger brother, Lakshman, was waiting for three hours at JBS to join his sister on the way to the airport.

“I spoke to them at 2.20 and said I was waiting at the bus stop. An hour later when I called, my sister's mobile was switched off. I continued dialling but it remained off. After my brother-in-law landed, I took the driver's number from him and called immediately, only to listen to the news of the death of my sister and her kids from a sub-inspector at the site,” said Lakshman, a PhD scholar at CSIR Uppal.

Nitish, Pawar call for new Opposition front, with Congress, to defeat BJP in 2024

Gehlot loyalists say will quit if Pilot is made chief minister

Chandigarh airport to be named after Bhagat Singh: PM Modi