Bengaluru: While the usual perception of elected representatives is that they squander their time, doing little for their constituencies after winning the polls,  Bengaluru’s members of parliament, it appears, have not been sitting idle since 2014. Going by a report of the Bangalore Political Action Committee (B.PAC) on utilisation of funds by MPs under the Local Area Development (LAD) Scheme in the years between 2014-15 and 2018–19,  there has been 100 per cent utilisation of funds in Bengaluru North, 95 per cent in Bengaluru Central and 82 per cent in Bengaluru South.

On an average, 61 per cent of MPLAD funds were spent within the BBMP limits  and 9 per cent in off BBMP limits during the period in question. Drinking water and water infrastructure, infrastructure development and public amenities received the highest allocation in the three parliamentary constituencies and among the assembly segments that benefited the most are Hebbal in Bengaluru North, Basavangudi in Bengaluru South and Chamrajpet in Bengaluru Central.

In Bangalore North constituency represented by Union minister, D.V.  Sadananda Gowda, where 100 per cent of the funds were utilised, the focus was on creating water infrastructure. Other projects included building of a volleyball and basketball stadium in Malleswaram and construction of RCC drains.

In Bengaluru Central represented by Mr PC Mohan of the BJP, priority was given to  supply of medical equipment to Victoria and Vani Vilas, giving the health sector a big boost in the constituency.

As for Bengaluru South represented by the late Union minister, H.N. Ananth Kumar,  water infrastructure and public amenities received the most attention and the key projects were building of multi- purpose halls and the Krishnadevaraya halt station. 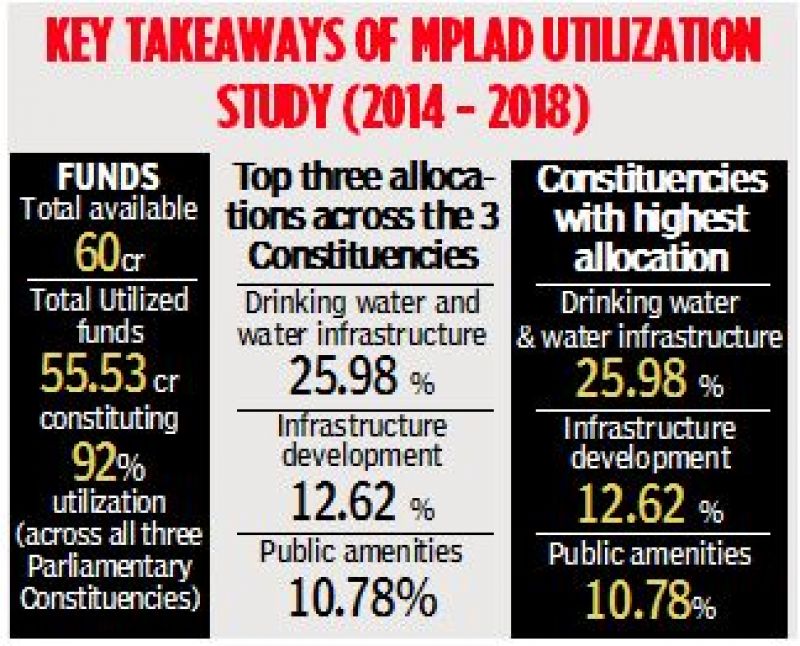 The study, that was released here on Thursday, classified the activities of the MPs according to the MPLAD guidelines issued by the Union government. Said Ms Revathy Ashok, hon. managing trustee and CEO of B.PAC,  “B.PAC has been at the forefront of advocating good governance through transparency and participatory democracy. This study intends to bring in transparency and accountability in utilisation of public funds  by elected representatives and was performed in consultation with all the three MPs , taking their qualitative inputs into consideration.  Our objective is to bridge the information gap between citizens and their elected representatives.”

There are three major stakeholders in the entire process: the MP, district authority and the Union government. The MPs recommend the work to be undertaken under the MPLADS based on locally felt needs and with preference to certain sectors such as drinking water, education, health, sanitation, irrigation and roads.  Based on their recommendation, the district authority then sanctions the projects and implements the sanctioned ones. Under the official guidelines, the district authority is required to select an implementing agency for execution of the project recommended by an MP.

As for the funds, the Union government releases the an MP’s annual entitlement of Rs. 5 crore in two equal instalments of Rs 2.5 crore each, directly to the district authority.