Jodhpur: Actor Salman Khan became qaidi (prisoner) number 106 as he stepped into the Jodhpur Central Jail on Thursday evening after being convicted in the 1998 blackbuck poaching case. One of the highest paid actors in Bollywood, Salman has been sent to jail for five years in the 20-year-old case.

His bail request will be heard at 10.30 on Friday morning, which means Salman has to spend Thursday night in the jail.

The 52-year-old actor will be given four blankets and has to sleep on the floor, said police officer Vikram Singh. He has been kept alone and nobody is allowed to meet him.

Photographs showed Salman Khan in his "lucky" black shirt and jeans arrived in jail surrounded by policemen, and later sitting before a police officer, apparently waiting. 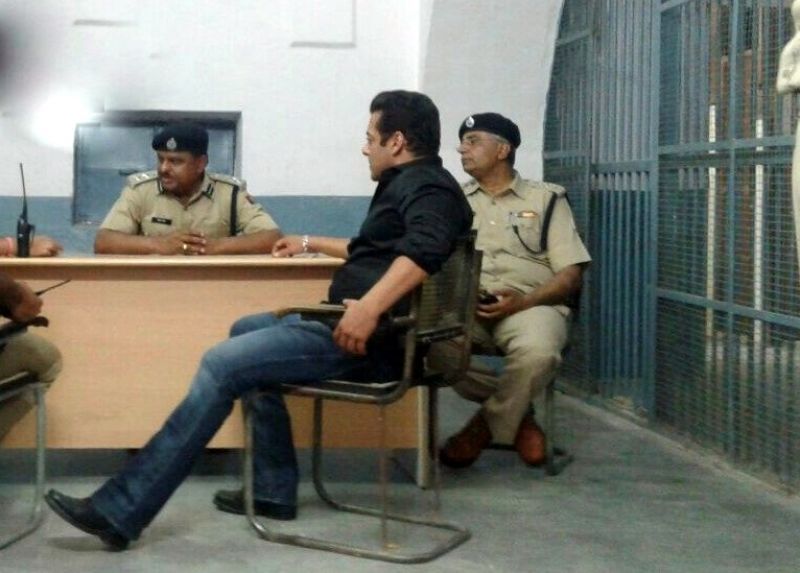 He has been put up in Barrack no. 2. His fellow prisoners include Asaram Bapu, the disgraced spiritual leader and 'godman' accused of raping a 15-year-old schoolgirl in his ashram in 2013, and Shambhu Lal Regar, who hacked a man to death, filmed the deranged act on video and shared it on social media.

There is heavy security in the prison because of another inmate, Lawrence Bishnoi, one who has threatened to attack Salman Khan. The actor will have his own guards in jail.

The police officer said Salman Khan's family could meet him once a week, but given that his bail request is coming up, his lawyer can meet him anytime.

The Bishnoi community, which is passionate about protecting the blackbuck and worships the animal like god, is the main complainant against Salman Khan. After his sentencing, members of the Bishnoi community cheered and celebrated loudly outside court.

Also Read: Why blackbucks are so important to Bishnois who sent Salman Khan to jail

Salman's lawyer is all set to plead for bail at Jodhpur sessions court for the actor on Friday.

If Salman doesn't get bail tomorrow then the actor will have to spend three more days in the jail as the court will reopen only on Monday.

Two killed, one injured in clashes over CAA