New Delhi: The Sikh man, who was shot in the arm by a masked gunman in Seattle, is out of danger and recovering in a private hospital, said External Affairs Minister Sushma Swaraj on Sunday after speaking to his family.

Taking to Twitter, Swaraj posted the update about Deep Rai, who is a US national of Indian origin.

"I am sorry to know about the attack on Deep Rai a US national of Indian origin. I have spoken to Sardar Harpal Singh father of the victim. He told me that his son had a bullet injury on his arm. He is out of danger and is recovering in a private hospital," she said in a series of tweets. 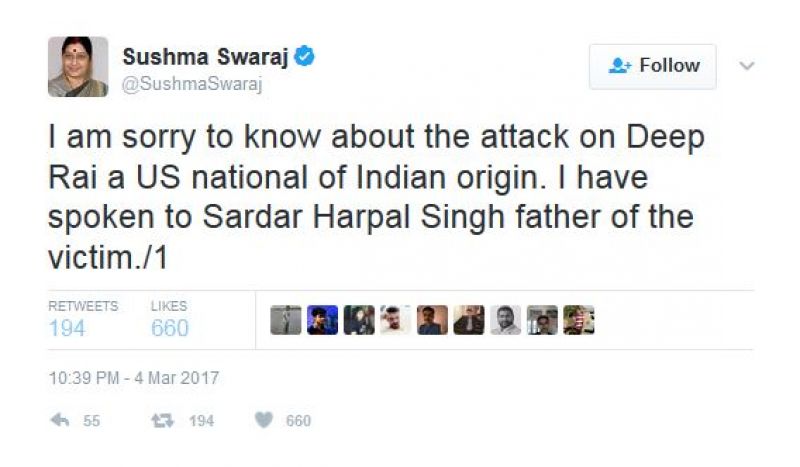 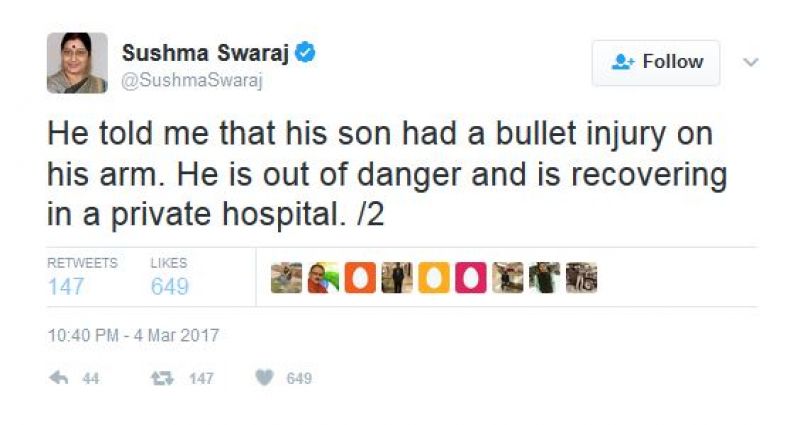 She also extended her condolences to the family of Harnish Patel, who was killed in Lancaster, assuring that the investigation of the case is in progress.

What came as an apparent third hate crime case in two weeks against the Indian community in United States, a 39-year old Sikh man was injured by an unknown assailant, who shot the victim outside his home and allegedly shouted "go back to your own country."

The victim was working on his vehicle outside his home in the city of Kent on Friday when he was approached by a stranger, who walked up to the driveway.

There was an altercation, and the gunman – a stocky, 6-foot-tall white man wearing a mask over the bottom part of his face – said "Go back to your own country" and pulled the trigger.

An argument ensued, and the suspect, wearing a mask, told him to go back to his homeland, the victim said. The victim told police the man then shot him in the arm.

According to the local police, the Sikh man sustained "non life-threatening injuries" and they are "treating this as a very serious incident."

Kent police have launched an investigation into the case and reached out to the FBI and other law enforcement agencies. Police are on the lookout for the suspect.

This development comes close on the heels of the tragic shooting in Kansas last month of 32-year old Indian engineer Srinivas Kuchibhotla, who was killed when 51-year old US Navy veteran Adam Purinton opened fire at him and his friend Alok Madasani before yelling "get out of my country."

Earlier this week, Indian-origin convenience store owner Harnish Patel, 43, of Lancaster in South Carolina was found dead of gunshot wounds in his yard.

■Indian-origin man shot in Seattle: US Sikh body seeks clarity on 'hate crime' angle
■'Go back to your own country': Masked gunman shoots Sikh man in US

Ex-PM Manmohan Singh admitted to AIIMS with weakness after fever