Vijayawada: Two-wheelers, mainly bikes, were involved in more accidents on the roads compared to lorries, buses, light motor vehicles, three-wheelers and other vehicles in Andhra Pradesh.

A road safety NGO’s social worker, R. Vinod, said that consumption of alcohol was increasing among youngsters and this was also one of the causes of two-wheelers increasingly being involved in road accidents. “Half of the youngsters drive bikes including sports and race bikes without a licence. Then there is an absence of checks by the transport and police departments encouraging youngsters to drive bikes rashly,” he said. 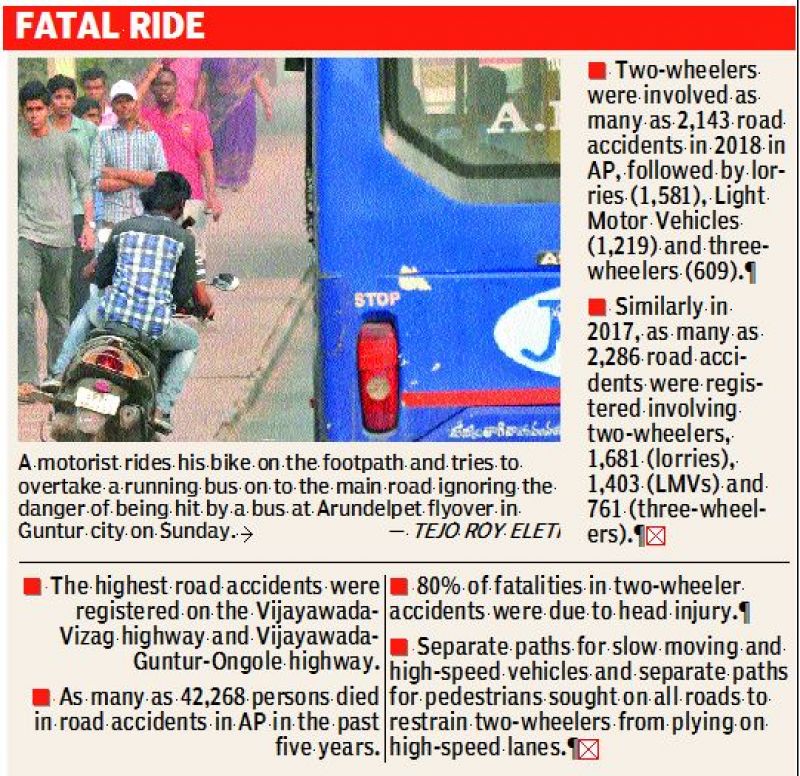 He added that bike racing by youth frequently took place on the national highway between Vijayawada-Guntur, Maddi-padu-Ongole, Nidama-nuru-Gannavaram, Han-uman Junction-Eluru, Kanchikacharla-Nandi-gama and other areas. He sought the use of speed guns and breath analysers as a deterrent.

A senior official in the transport department, G.C. Rajaratnam, said that rash driving, zigzag driving, bike-racing and driving on other speed lanes were the main causes of two-wheeler accidents.  Referring to the rash driving of two-wheelers by youth, he said the transport department conducted awareness programmes in educational institutions with the cooperation of the police department.

Senior officials of the AP police department said that speed measuring laser machines (speed guns) were installed on national and state highways and checks had started to restrain speed and rash driving. They added that the police department would take measures against plying of two-wheelers and three-wheelers on the lanes meant for fast vehicles on the highways as this was also leading to road accidents.

Some liquor outlets shifted, in some facilities upgraded: Excise dept to Kerala HC

'Red Light on, Gaadi off' initiative to begin from Oct 18 in Delhi: Kejriwal