Tiruvarur recorded a maximum of 94.2 mm of rainfall ending at 8.30 am on Sunday.

Chennai: A low-pressure system over the South Andaman Sea is expected to turn into a depression in next 24 hours and a deep depression in the following 48 hours, bringing more rains to Tamil Nadu. 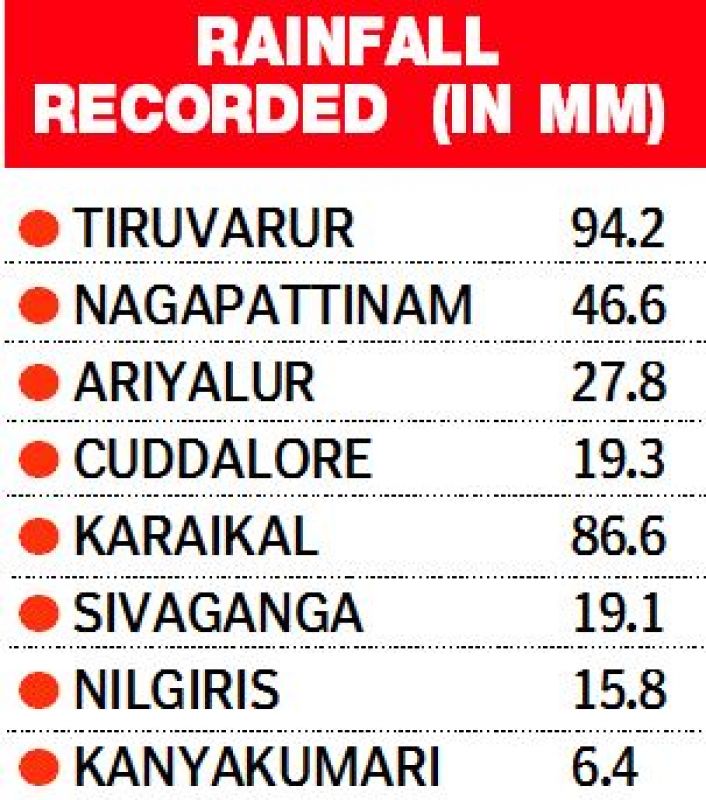 More rains are expected in Chennai, while scattered heavy to very heavy rain is expected in coastal regions of Tamil Nadu in next 24 hours, Regional Meteorological Center  said on Sunday.

As cyclone Ockhi lost steam, a low pressure formed along the northern parts of Tamil Nadu and brought rains to northern districts of Tamil Nadu including Nagapattinam, Tiruvarur, Cuddalore and Ariyalur on Saturday and Sunday.
Tiruvarur recorded a maximum of 94.2 mm of rainfall ending at 8.30 am on Sunday.

There are indications of a cyclonic circulation extending up to 5.8km above the mean sea level with sea condition is very likely to be very rough over and around North Lakshadweep islands.

“The cyclonic circulation is likely to bring moderate to heavy rains over a few places in Tamil Nadu on Sunday and Monday. While the sky condition will mostly remain cloudy, Chennai can receive scattered rainfall in next 24 hours”, said S Balachandran, director of Regional Meteorological Centre.