Hyderabad: The architectural masterpiece Charminar, celebrating its 425th birthday on October 9, is structurally strong, but is faced with odds: fumes, vibrations, dust among other pollutants and the vagaries of nature are eating into the vitals of the edifice in which history remains frozen.

A government ban is on, as a protective measure, on plying of buses and autos around the monument with a view to checking vehicular pollution and vibrations. Yet, the presence of cars, cabs, two-wheelers and other motor vehicles continue to pose a danger to the monument, that’s by far the most popular tourist spot in the city. Dust from construction sites in the area is causing serious damage to imposing structure.

The Archaeological Survey of India is the custodian of Charminar. It is painstakingly engaged in conservation and restoration works, besides monitoring air pollution. It has recorded over three times higher than the normal suspended particle matter level in the area, as of  now.

According to Mr Venjamuri Kotaiah, assistant archaeological chemist of ASI, SPM levels are high in the Charminar area. “As against the norm of 58 micrograms, the SPM level is 150 micrograms, at times even more, which affects not just Charminar but human beings too. Dust, fumes, vibration, smoke, aerosols and bird droppings, in addition to vagaries of nature, are taking a heavy toll of smooth structures,” Mr Kotaiah said. 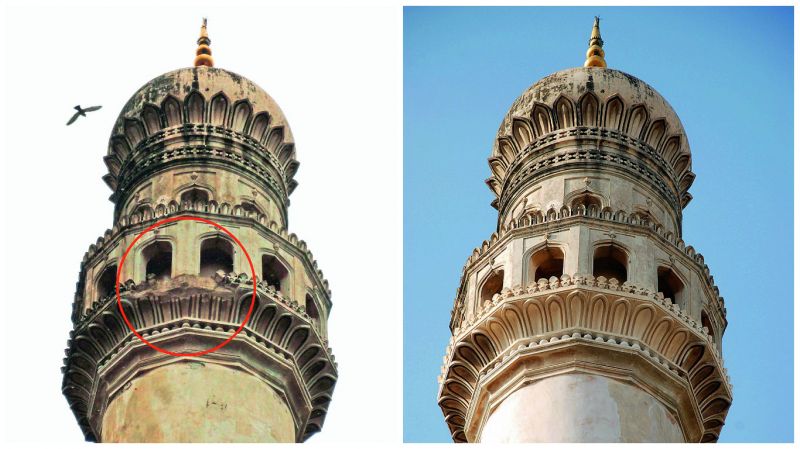 He added: “Un-burnt carbon from vehicles settles on smooth layers in the upper reaches, like minarets, which absorb lot of dust. You can see blackening at the top. When there are rains, its sucks water and this leads to growth of micro organisms. This weakens the smooth surface and gradually damages structures. Minarets are the most affected. There is a very complex impact.”

ASI has completed restoration of the northeast minaret. It has now taken up work on the northwest minaret. “We are undertaking repair of cracks, damage to motifs etc. It will be completed in two to three months. Conservation and restoration are not a one-time effort, but a continuing process,” Mr Kotaiah said.

Though the undivided AP government and subsequently the new Telangana state government took up a Charminar pedestrianisation programme, it is progressing at snail's pace due to local issues. It missed the Unesco world heritage tag due to the poor environs and awful upkeep of the surroundings, that heap shame on the governmental agencies.

The area has rustic, unclean ambience, though crores of funds allotted in the past for the area's maintenance went down the drain or were eaten away by the politician-engineer-contractor lobbies. ASI asserts that Charminar's life can be extended for many more years, provided the environment is clean and a serious interest is evinced in conservation.