Kuttiady MLA Parakkal Abdulla said his act was only to bring the government’s attention to the situation in Kuttiyadi-Perambra region, the epicentre of the Nipah virus. (Photo: ANI | Twitter)

Thiruvananthapuram: An MLA of Indian Union Muslim League (IUML) on Monday attended the Kerala Assembly wearing a mask and gloves to highlight the impact of Nipah virus in Kozhikode district, triggering a war of words between the ruling LDF and opposition UDF members.

The Kuttiady MLA, Parakkal Abdulla, walked into the assembly wearing mask and gloves, and was seen greeting the Opposition members.

The state was maintaining extreme vigil following the outbreak of the deadly virus.

“Since the Nipah virus was confirmed, government has taken all necessary steps to contain it. The health department has intervened efficiently. Even then, the MLA has come to the house wearing a mask which amounted to self ridicule,” Vijayan said.

The health minister said there was certain criterion for wearing a mask. If the member was infected by the virus, he should not have come to the house, she said. 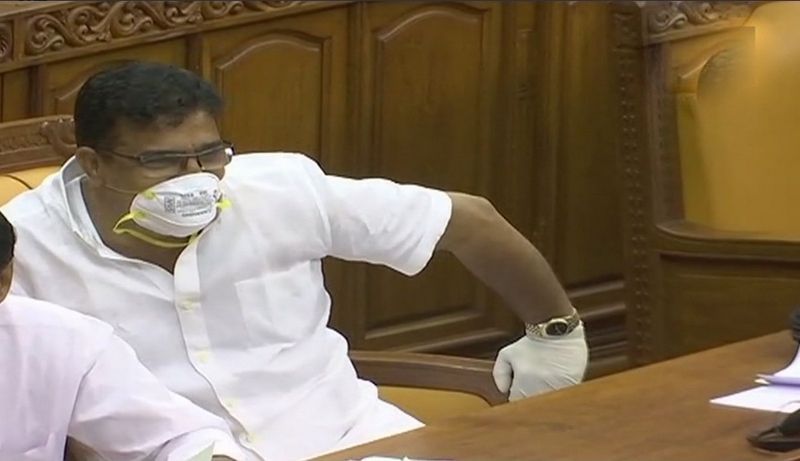 Leader of opposition Ramesh Chennithala said he was told by the MLA that in Kozhikode everyone was wearing masks and so he had come to the House as a symbolic gesture.

Abdulla said his act was only to bring the government’s attention to the situation in Kuttiyadi-Perambra region, the epicentre of the Nipah virus.

Speaker P Sreeramakrishnan also enquired from the member why he wore the mask.

Sixteen people have lost their lives so far to Nipah virus (NiV) in two districts, Kozhikode and Malappuram, of the state since the confirmation of the deadly virus on May 17.