DGP Javed Ahmed looks at the arms recovered from the Jawarhar Bagh encroachers, in Mathura.

New Delhi/Lucknow/ Mathura: The temple town of Mathura, close to Agra, was on edge on Friday with the death toll in Thursday’s clashes rising to 26, as the Centre stepped in and sought a report from the Uttar Pradesh government.

Over 368 people have been detained over the violence that claimed the lives of an SP and an SHO, among others.

Union home minister Rajnath Singh on Friday spoke to UP chief Minister Akhilesh Yadav, who has ordered an inquiry by the Agra divisional commissioner. Speaking in Barabanki on Friday, the CM admitted “some lapses” by the police in Mathura.

“There were some lapses. The police should have gone with full preparation and after holding talks,  there was no information they had so much arms and ammunition,” he told reporters. 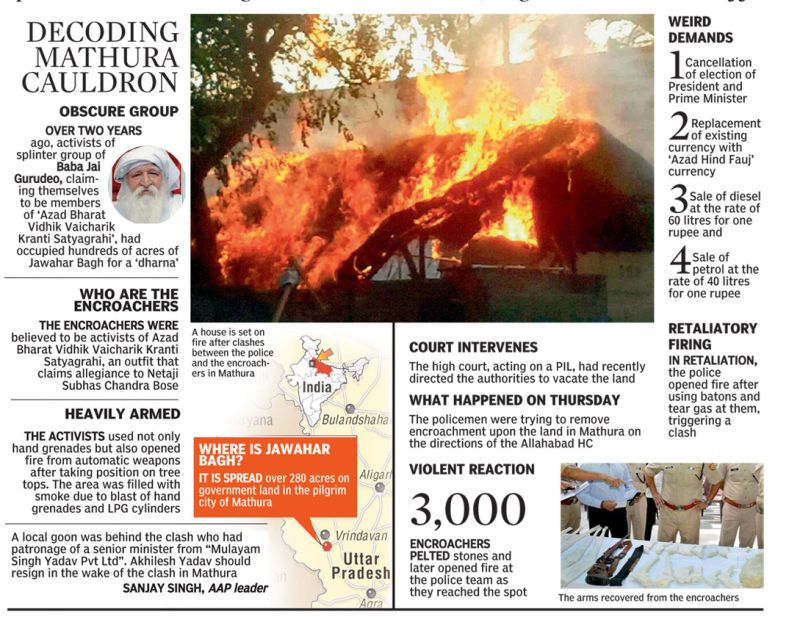 Earlier, Union minister of state for home Kiren Rijiju had said in New Delhi there were “lapses” on the part of the state government. The CM also announced compensation of Rs 20 lakh for the families of each slain.

The violence once again brought into focus the fragile law and order situation in UP, with the BJP, Congress, BSP and others accusing the ruling Samajwadi Party government of unleashing “goonda raj” in the state.

The violence erupted as the police tried to evict illegal occupants, believed to be members of a “cult” calling itself  Swadheen Bharat Andolan, from Jawahar Bagh in Mathura on Thursday on the directions of the Allahabad high court. The encroaches lobbed hand grenades and opened fire with automatic weapons at the police.

Squatters had 1,000 cylinders
Mathura SP Mukul Dwiwedi, who led the police team, got a bullet in his head, while SHO Santosh Kumar was shot in the face. While the SHO was declared brought dead at the hospital, the SP succumbed to his injuries later.

Sources said the squatters had illegally accumulated nearly 1,000 LPG cylinders and used these to set off the explosions and fire. Eleven of the deaths were caused by these blasts.

Rajasthan: Congress rings in truce, 15 ministers sworn in with eye on polls

No scientific evidence to support need for booster vaccine dose against Covid: ICMR