The Rs 100-crore worth of unpaid challans has accumulated in the past five years.

Hyderabad: Despite motorists having paid Rs 207 crore in the last five years towards traffic challans in the city, there are still 46 lakh challans to be paid amounting to nearly Rs 100 crore as penalty for violating various provisions of the Motor Vehicle Act.

The Rs 100-crore worth of unpaid challans has accumulated in the past five years. Lakhs of such cases are pending since 2011. While special drives by traffic police yielded results in the form of Rs 207 crore-challan amount being paid, lakhs of motorists are continuing to dodge payment.

Financial experts said that even long-standing arrears can be collected if cops can send out a clear message to the motorists that delay in payment will result in more severe punishment.

Mr G K Rao, financial consultant with World Bank, said though cops had filed chargesheets in a few hundred cases for non-payment of challan amount, it has not been continued. “Filing of charge sheets should be a regular feature. If motorists are jailed or more fine is levied for delaying challan payment, it should be given wide publicity. The drive to seize vehicles if challans are pending should be intensified,” he said. 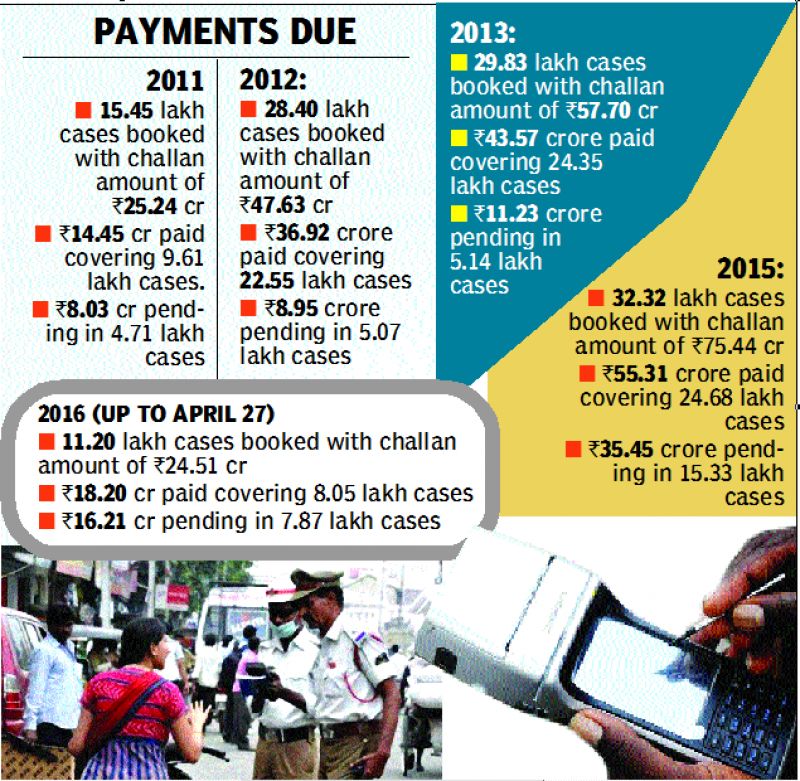 For collecting arrears, there should always be a threat perception that if they don’t pay up, the consequences would be dire. "Measures like sending a cop to the door steps of the motorist will also have a major impact in getting challan amounts paid," said Mr Satish Gupta, a financial consultant.

Additional Commissioner of Police, traffic, Jitender said the fact that Rs 207 crore had been collected reflected the improved credibility of the system. Compliance to challan payment is over 70 per cent.