“A number of factors played a role. Demand for AC coaches has seen an increase, with 3 AC coaches making the most increase in sales. Also, demand for Chair Cars (CC) has increased over the last year. The average window for booking has been increased to 120 days from the earlier 60 days. This has been of an advantage to travellers,” said the official.

“It is difficult to travel in non-AC during summer. The temperature rise has clearly accounted for more people opting to travel by 3rd AC. I see this as an addiction. Once we travel in AC, we prefer the same again,” said Satish Kumar K,  a frequent traveller. 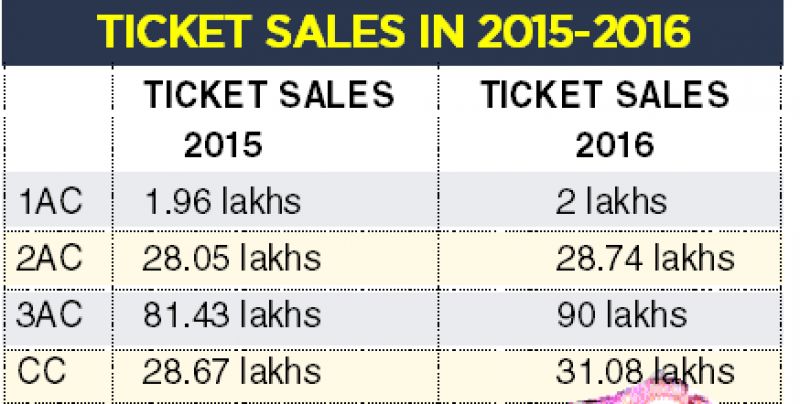 In 2015, Suvidha trains were also introduced, replacing premium trains. That was another measure to meet the increasing demand during peak season. Starting 2015 end, railways has doubled cancellation charges in all classes. 1 AC cancellation fee was increased to `240 as against `120, 2 AC to Rs 200, 3AC to Rs 180 and sleeper class to Rs 120.

“There is a lot of unauthorised sale of tickets. Cancellation charges have been increased to put touts to task,” said another senior official. The last fare hike was two years ago. Effective June 2014, government increased passenger fares by 14.2 per cent and freight rates by 6.5 per cent to help fund wagon purchase, modernisation of tracks and improvement of  safety.