New Delhi: The birth of Lord Krishna was rung in with religious fervour and gaiety across the country on Monday as devotees thronged temples, while in Maharashtra 'dahi handi' celebrations on the occasion saw enthusiastic participation by youngsters.

In Mathura, which according to mythology, is the birthplace of Lord Krishna, lakhs of pilgrims paid obeisance at major temples amid tight security.

Vrindaban was the centre of attraction for pilgrims in the noon, where the festival was celebrated in three major temples -- Radha Raman temple, Radha Damodar temple and Shah Ji temple.

Religious institutions, political leaders and Govinda mandals took part in the 'dahi handi' celebrations which were marked by frequent chants of "Govinda aala re" (Govinda has come).

Several organisers roped in celebrities to pull crowd to their 'dahi handi' events. 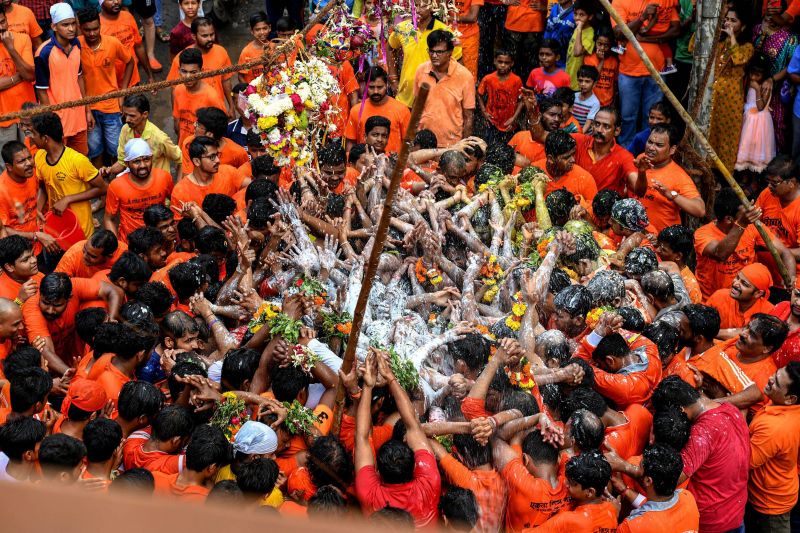 The celebrations were held amid strict vigil by the Mumbai police who were out on roads to ensure compliance to the Bombay High Court's order on the age of participating Govindas (they should not be below 14), insurance for them, and the height of the human pyramid.

The Disaster Management Cell of the Brihanmumbai Municipal Corporation (BMC) remained alert to deal with any eventuality, while hospitals were asked to keep medical staff on standby.

In the past, several Govindas were injured after falling off human pyramids.

President Ramnath Kovind and Prime Minister Narendra Modi took to Twitter to extend their greetings to the nation on the occasion.

"Greetings and good wishes to fellow citizens on the auspicious occasion of Janmashtami. The teachings of Lord Krishna have a universal message - Nishkam Karma. May this festival inspire us to follow the path of virtue and righteousness in thought, word and deed #PresidentKovind," a tweet by the president read. Maharashtra Chief Minister Devendra Fadnavis and Bollywood megastar Amitabh Bachchan also wished people on the occasion through Twitter posts.

In Rajasthan, people thronged famous temples like Govind Devji temple in Jaipur among others since early morning. Elaborate arrangements for security and crowd management were made at the Govind Devji temple which is the centre of attraction among the devotees, police said.

Scramble to be in KTR ‘Cabinet’