New Delhi: The crucial Cabinet reshuffle, to take place on Sunday morning, hits its first hurdle when the Janata Dal (United), which recently joined the NDA, indicated on Saturday that it is not likely to join the Modi Cabinet.

There has been talk in the saffron camp that one of the mantris was asked to go for his alleged links with an ongoing scam.

Like Bihar Chief Minister Nitish Kumar, Shiv Sena chief Uddhav Thackeray also said in Mumbai that he had received no information from the BJP. He claimed that he had got information about the Cabinet reshuffle from the media. “I have not enquired about it... I have neither received any communication from anybody nor are we hungry for power,” he said.

In the case of the AIADMK, however, their internal squabbles are proving to be the stumbling block in its joining the government. AIADMK leader M. Thambidurai, who met Mr Shah on Friday, might be a likely representative from the party along with P. Venugopal and V. Maitreyan if the party decides to join the NDA. There has been no official statement from the party yet. The BJP president on Friday attended a coordination meeting with various RSS outfits in Vrindavan, and he and Mr Modi were giving final touches to the changes on Friday. 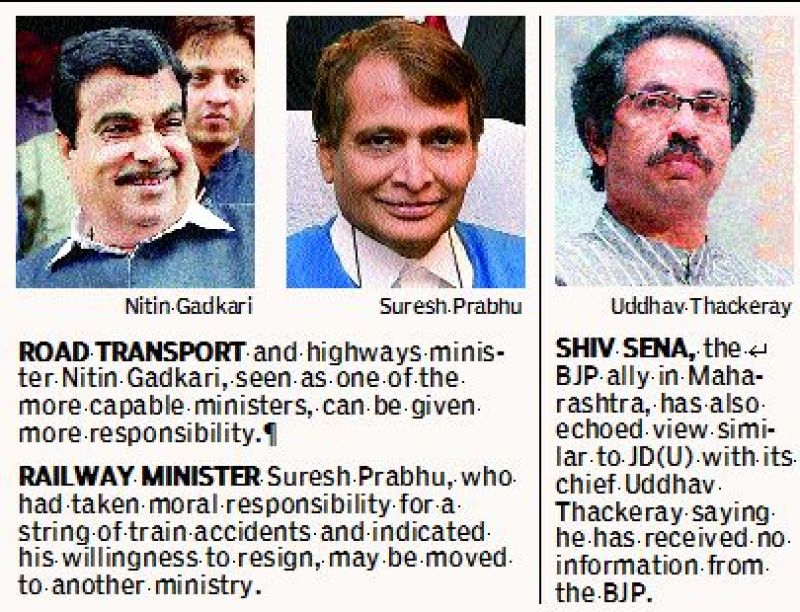 More than half-a-dozen ministers are expected to make way for new faces in the reshuffle, while the portfolios of some minister may be changed.

Dropping of weapons through drones in Jammu area: Less number of incidents reported