Karnataka: Holiday for all! But did the strike work?

Bengaluru: The Bharat Bandh called by the various trade unions on Friday received a mixed response in the city. The protest was against the various anti-labour polices of the state and central governments. Various other demands were also on the anvil. Even though it was a dawn-to-dusk bandh, the city returned to normalcy as early as 3 pm.

Despite this the bandh hit normal life hard, as financial institutions, hotels and vegetable supply was affected. According to an evaluation by the state finance department, the total loss to the state caused by the bandh in the form of tax, revenue, business turnover and loss of working hours, is around `700 crore. According to Sudhakar Shetty, Vice President, FKCCI, the state lost revenue to the tune of Rs 200 crore because of the bandh.

"This bandh served no purpose at all. Everything can be resolved through talks. Over the last 40 days, we lost five days due to several bandhs. This will affect our economy,” he warned.

According to the state government officials, the bandh received a mixed response across the state. Bengaluru urban district administration officials said, in Bengaluru city, colleges, schools, universities, banks, factories and other business establishments were closed because of the bandh.
BMTC and KSRTC services were affected between 6 am and 3 pm. Most of the autos were off the road. Cab services were normal. Airport cab services were unaffected. But the BMTC withdrew Vayu Vajra services till 3 am. The train movement was not affected.

Protests: Around 18 labour organisations held a massive protest march between Town Hall and Freedom Park as part of the strike. A goods auto driver was manhandled for defying the bandh call. Protests were also held in Peenya, Goraguntepalya, Bommanahalli, Jigani and Anekal and effigies were burnt.

8 Kannada films released
It was a black Friday for Kannada film producers with tepid ticket sales. According to the state film chamber a total of eight films were released on Friday, but due to the bandh there were no many takers for the ticket. All multiplexes in the city functioned normally on Friday and there were no cancellation of shows.

Metro service intact
Even though the BMRCL had planned cancellation of services in the event of any untoward incident, service was not affected. But occupancy rate was very low, both between Baiyappanahalli-Mysore Road and Mantri Square and Nagasandra stations. "As all the offices and business establishments announced a holiday, there was less occupancy," said an officer. On the green line, services were cancelled in the morning as a few protesters gathered in front of Goraguntepalya metro station around 9 am. But the services resumed immediately.

Protest at KIAL
At KIAL, a group of airport workers held a protest in support of the bandh, but it did not affect its functioning.

With BMTC buses off roads, private players make merry
Friday’s bandh saw many Bengalureans struggling to reach their workplaces and elsewhere in the absence of   BMTC buses that went off the roads.  Most had no choice but to opt for private buses that made a killing, by charging double their usual fare.

Some like commuter, Reshma Bhatia, took to social media to vent their frustration. She posted, " I was charged double the fare by a private bus. I paid up during the onward journey as I was caught unawares, but on the return I refused. I had a heated argument with the conductor and threatened to inform the police, after which he returned my remaining change."

Said a hotel chef, Chandrashekar, " I needed to go to Banashankari from Malleswaram. It usually costs around Rs 20 by a  BMTC bus, but  today the private buses were charging close to Rs 50,  so I didn't go. Even to go to work, I had a relative drop me till the Majestic and then walked to Okalipuram from there." 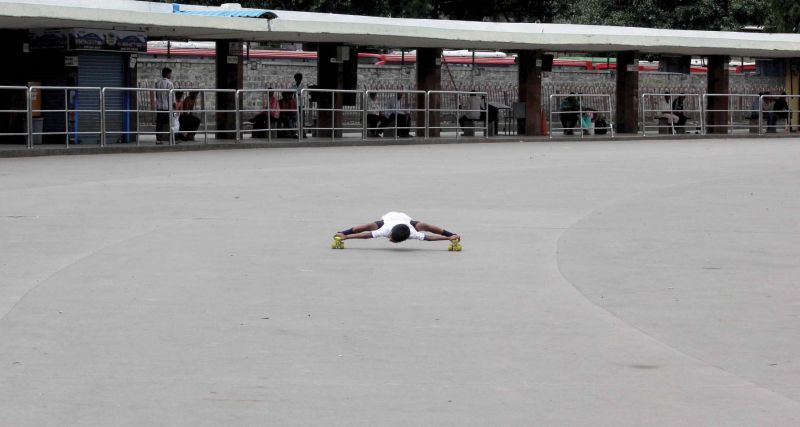 A limbo skater shows his skills at the deserted Majestic bus stand in city on Friday. (Photo: DC)

Asked  about the inconvenience caused to regular BMTC users by the bandh, trade union member and MNC employee, Ramesh, who participated in the rally from Town Hall to Freedom Park,  said it was all for a good cause. " I myself travel by a BMTC bus from Yeshwanthput to Peenya 2nd stage every day. The bandh affects us too when there is no transport available. But it is just for a day and we are doing it for the good of the nation," he reasoned.

When contacted,  Transport Commissioner, H.G Kumar noted that private buses should not be running within the city on any day. “They are meant only for inter- city travel. Also, no one has come to me with complaints about private buses operating in the city and  overcharging commuters. We could book them if we the  public complained,” he said.

Strike hits festive spirit
Although there was a mixed responses to the nationwide bandh in Bengaluru, festival shoppers and vendors felt the heat on Friday without the public transportation. Busy markets with high footfalls, like K.R. Market, Basavanagudi, Thyagarajanagar, Banashankari, Malleswaram and Yediyur remained closed till evening. The vendors complained that though the markets were open like any normal day and the stocks came in on time, there were no buyers at all.

Mr Diwakar, a flower vendor in K.R Market, said, “Four days before a festival are when our business peaks. But the bandh just two days before Gowri festival has deeply hit our profits this year. Since there were no buses plying, only those who owned vehicles visited the market. Also, many did not turn up worrying about violence and protests. Flower prices crashed by afternoon as there were no buyers.”

While vendors felt the pinch in the city, farmers traveling to Bengaluru from neighbouring villages like Kanakapura, Bidadi and Ramanagaram too suffered losses because of the bandh. Without many buses or tempos plying on the road, they had to wait for the bandh end by evening to set up stalls in markets.

As Gandhi Bazaar Main Road looked deserted without the normal hustle-bustle ahead of the festival, Ms Rammama, a vendor, who reached Basavanagudi around 5 am to set up banana plant and mango leaves stall, said her one day’s income was lost because of the bandh and hoped to recover the losses in the evening hours. If the bandh dampened the festival spirit in the city, many worried that vegetable and flower rates could soar on Saturday.

Latha, a resident of Katriguppe, who planned to finish her festival shopping on Friday considering all the markets would be crowded on Saturday, rued that prices may burn a hole in the pockets this festival.