Delmon, a survivor of Ockhi,  lives with his wife and children at Adimalathura, a coastal village in Thiruvananthapuram district.  He experiences nightmares; visuals of violent water haunts him often leaving him sleep-deprived. Delmon stayed in water a whole night and also witnessed death before  his eyes.  His wife and children are struggling to keep Delmon calm. He wakes up in the middle of the night, walks to the nearby church and returns early morning. A large number of survivors are facing similar psychological problems. The trauma they experienced has left many of them in a state of shock. Most of them witnessed the death of their kith and kin but were incapable of doing anything. The survivors, bread-winners of their families, have not mustered the courage to go back to sea.

"The story of two brothers from Pulluvila is heart-wrenching.  Shibu went with his elder brother for fishing, but when cyclone struck, their boat was thrashed away. They had to stay one whole night in the sea. When Shibu became weak, his brother tied him on his shoulder. But with the passing of time, Shibu got weak and he asked his elder brother to leave him there and requested his brother to escape.  Though they were rescued, Shibu died within a few days," said Sindhu Nepolean, journalism graduate from the University of Hyderabad, who is  also an active member of  the community. She works with Coastal Students' Cultural Forum, an  NGO established three years ago  for the welfare of students in coastal areas. The group members work actively among the affected people of coastal areas for their betterment and help them in overcoming the tragedy.   "We have been trying to talk to Shibu's brother but he is yet to come to terms with the tragedy," she added.

During the time of Ockhi, a Facebook post written by Sindhu was discussed widely. In many ways it was an eyeopener for many about the magnitude of the disaster. Another person from Adimalathura, owner of three fishing boats which he lost in the cyclone, has a different story to tell.  Most of the members in those fishing boats were relatives and belonged to the same family. After the disaster, he is in a state of isolation. He was stamped as the reason behind all the loss happened to the family. Survivors are also experiencing anxiety, extreme concerns about safety and obsessive preparation to avoid the next disaster.  "After the cyclone, most of the affected fishermen got traumatised. When they go to sea for fishing, even when wind blows with a slight variation in speed these people start  panicking. This forces other members to return to the shore empty-handed. So, nowadays other fishing boats are reluctant to include Ockhi survivors with them.

The very next step after the occurrence of a disaster should be taking measures to heal the trauma-affected people through continuous counselling and interaction with the people. But Ockhi survivors were denied all these arrangements by the government. The only counselling that was carried out was by some NGOs," said Sindhu. Sakhi, a women empowerment organisation, conducted counselling classes for women members of affected families. A group of psychology students from Women's College, Thiruvananthapuram, talked to the people of the affected areas and helped them in overcoming the trauma.  The Indian Medical Association and the Church collectively initiated a counselling session for survivors near Adimalathura and nearby places. A team of five doctors from Peroorkkada Mental Hospital and the medical college conducted counselling sessions. Other than these initiatives, no major action has been taken by the government.

"Children are the most affected. The sudden loss of their father has left many of them in a state of distress. A group of students from Rajagiri College of Social Sciences conducted a three-day counselling session for children who lost their parents in the cyclone. A ward at jubilee hospital functions mainly for the counselling and treating the Okhi-affected people. We are also planning to set up counselling centres in each of these regions; the first will be at Pulluvila.  After the initial fuss, the government has a cold attitude towards the issue," said vicar-general of Latin Catholic Church, Eugene H. Pereira. 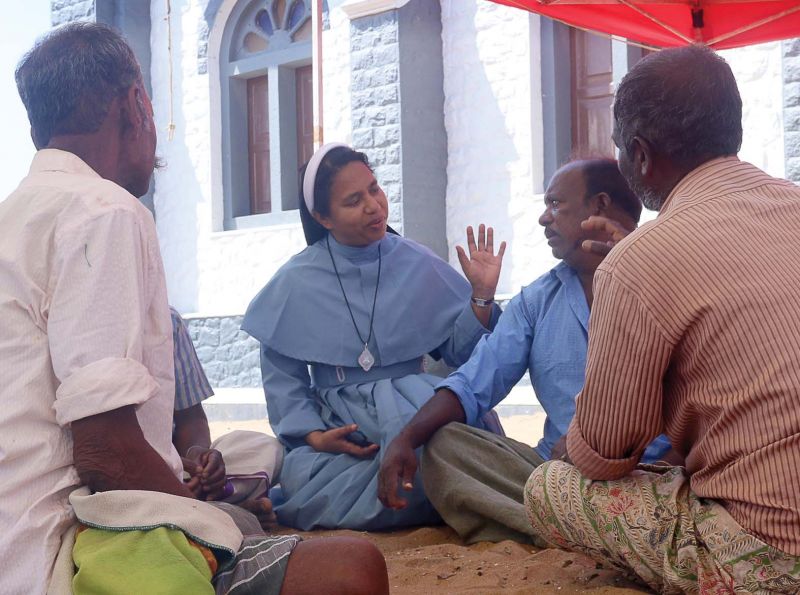 Alcohol, not the only solution

A section of survivors is taking to alcohol in an attempt to rid themselves of the fear and the nightmares of the traumatic experience they had. Thomas, 23, is a native of Pulluvila. He, also the sole bread-winner of his family, went along with  a group of ten,  including people from Tamil Nadu. Two among the group lost their lives before they were rescued. After coming home, he took to drinking  to escape from the dreadful experiences.

"This is a mental health condition called post-traumatic stress disorder (PTSD). After surviving a traumatic event, some people can't stop thinking about what's happened. The experience of the terrifying event comes as flashback with symptoms like stress and anxiety. Individual intervention is necessary in such cases. Rehabilitation centres should be set up in these places to bring back the people to normal lives. Giving timely support is the only way to prevent people from turning to unhealthy methods," said Dr R.  Jayaprakash, child psychiatrist, SAT Hospital.

The state government has transferred an amount of Rs 20 lakh to the treasury fixed deposit account of dependants of fishermen who went missing during the cyclone. But the amount will be given only after a request citing the need for the money with proper certificates. Mercy Anthony from Adimalathura who lost her husband during the cyclone said, "our financiers knock at the door over the loans we took for our partially completed house and lost fishing gears. One day announcements in the media said that Adani gave us Rs5 lakh and financiers came for it. Actually, we have not received anything of that sort. The Rs 20 lakh in the bank cannot be used," she said. Ms Anthony has to support four children and provide for her husband's elderly parents.

"The people who are yet to be addressed are the survivors. They were only given Rs 10,000 each. Most of them were physically injured and not in a condition to work. Many of the boats and fishing equipment were also damaged. Financial loss may have happened to the owners, but it is the survivors who are more struggling," said Sindhu. An announcement was made recently that the state government had released Rs 83 lakh for 19 missing vessels from Vizhinjam. However, the beneficiaries said they were yet to receive it. "We haven't received any complaints regarding this. If anyone has such problem they can approach the department and necessary action will be taken. Government has distributed compensation for fishing implements. The rest has was sanctioned but may take time in the process," said S. Venkatespathy, director of fisheries department.

Unnecessary warnings
During the time of Ockhi, it was alleged that the government had failed to give pre -cyclone warning to fishermen. After the cyclone, warnings are given most of the days. "Nowadays people have started to avoid these warnings .Even when wind blows with a slight variation, it is announced that fisherman should not go to work. Most of our community members struggle to earn daily bread. We don't know any trade other than this. So if we don't go to work one day, who is going to fend for us? " asks Nepolean, father of Sindhu Nepolean,  who had a narrow escape from the storm. Most of the time the information provided is incorrect, he added.

After the cyclone, the government distributed life jackets,  but many are yet to receive them.  "The life jackets were given to many people. But they didn't explain or make people aware of the necessity of using them. After the first few days of fuss, many of them have stopped taking life boats to sea. The lack of space in fishing boats is also one of the reasons," said Nepolean. 'Sagara' is an application developed by the National Information Centre to ensure the safety of fisherman. The app collects information about people from fisherman community and helps government in collecting specific data about them. After Ockhi, the government has given more focus on the working of 'Sagara.'