Hyderabad: The grandeur of Qutb mosque

The open courtyard of the Musheerabad Masjid (built in the 16th Century) houses two huge symmetrical structures and right above it are steel girders. (Photo:S. Surender Reddy)

Hyderabad: The Metro Rail pillars have come up on the main road, but the trains have not yet started plying this route. Right beside one such pillar, you have to take a U-turn and then take an inner lane to see this yesteryear beauty, the Musheerabad Badi Masjid. Luckily, some of it has been left untouched.
After you enter the imposing gateway with the three pointed arches, you unfortunately get to see the newer version which has been built right in front of the old mosque. Out of the three gateways, only one of them is being used right now.

What should have been a beautiful open courtyard, now houses two huge symmetrical structures, with two floors and a terrace and right above it are steel girders that attempt to make it look like a design. So the first view is not that of the mosque, but the new marble halls. Greenery in many places helps cool down the place. That is spoilt by a line of plastic pipes for devotees to wash up, because the original wazookhana and fountain lies in disrepair. Luckily, the new structure is not attached to the old mosque which is left in its solitary beauty.

This mosque was built during 1626-1672 by the Qutb Shahi King, Abdullah Qutb Shah. It was a small sarai at one point of time, but with the new huge structure, there is little space left to enjoy the old structure. All the rooms are locked, but what is cute is that they have built pigeon coops along the walls on top. It looks very neat, and you can hear a pigeon coo or see it flying off or trying to get in.

Once you cross the new structure, the older masjid comes to sight and you realise that the Qutb Shahis knew their architecture. It is all stucco and this masjid is framed by two bulbous minarets. According to late Dr V.V. Krishna Sastry, the retired director of the AP State Archeology department who has written about ancient mosques in Hyderabad, “The Musheerabad Masjid is one of the biggest and the most elaborate buildings of that period. The prayer hall is a rectangular building with five arched openings and has two naves, with the middle one bigger than the other four.” 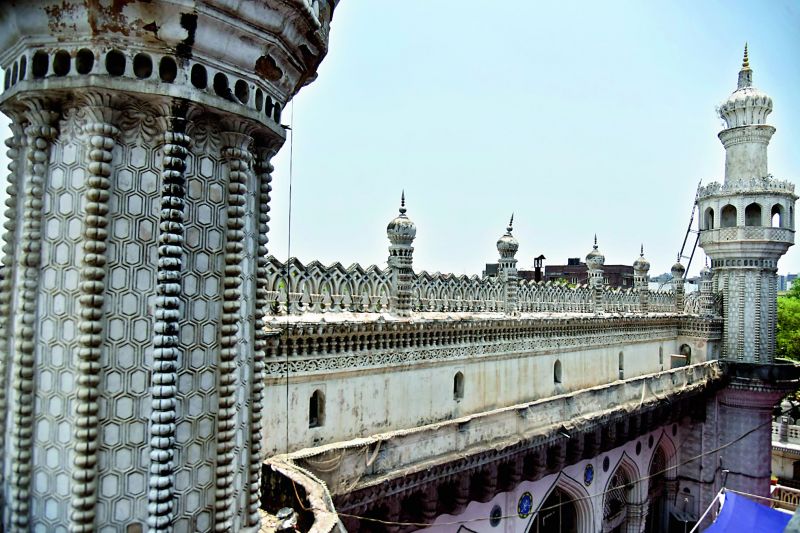 The beautifully designed minarets of mosque.

The two minars on top of the mosque are quite the signature and Sastry waxes eloquent, “The two main minars are raised over a three feet high plinth and embellished with floral and wavy designs in stucco. The capital is then divided into six divisions of different designs like beads, petals and finally with a row of drops below the parapet.”

The masjid seems to be held by two huge pillars made of stucco, but the pieces are falling off. A net has been placed to save people from injury. The new structure tries to copy the design of the pillar, but it is not even worth a mention. The mosque is state protected and some of the old arches have still been retained, though not much care is being taken of this old structure.

The mosque itself is cool and, to quote Sastry: “The roof of the prayer hall is supported by elephant trunk-like projecting brackets which support the short capitals, set in lotus cups. The prayer hall has ten bays with conical ceilings each supported by four arches. The mehraz is a vestibule with three arched openings on either side of the main arch and it is made of black basalt.”

Mr Ghulam Moyuddin, who visits the mosque every day, says in a worried voice, “The old building is falling apart. We have put up a net but are not sure how long that will hold. The state department has to do something urgently.” In fact a tiny peepul tree is growing from one of the cracks in the minaret.

There is symmetry in everything in the old mosque and it is decorated with limestone plaster, which probably is why the mosque still stands for us to write about. Another story says that after the fall of Golconda, the Masjid was practically abandoned till the area became a jagir of Nawab Arastu Jah Mushir ul Mulk, when the Prime Minister of Nizam Ali Khan granted it to him in 1795.

People soon started occupying the empty spaces near the mosque and now it is a very crowded locality. Talk of open space is now only imaginary. Way back in 1951, one of the minarets had bent and apparently was repaired.

There is an urgent need for repairs to the old mosque to keep it intact and appreciate the historical architecture and values. Once you step out of the mosque, you go back to hustle and bustle of the main road, crowded with vehicles, shops and people.