Jumbo tramples girl, 3 others to death in Coimbatore

The elephant, which is in sedation, is pushed into a lorry in Vellalore. (Photo: DC)

Coimbatore: In yet another ghastly instance of man-animal conflict in recent months, a wild elephant trampled four persons including a 12-year-old girl to unseemly death near Podanur in Coimbatore, triggering panic among residents in the early hours on Friday.

After a daylong struggle, the forest department staff captured the jumbo deploying a 'kumki' and using tranquilizer shots. The delicately captured jumbo was then transported safely to the Sadivayal elephant camp.

According to the chief conservator of forests, Coimbatore circle I, Anwardeen, the tusker, which camped near Marudhamalai four days ago, had reached Arivozhi Nagar residential area in Kovaipudur on Thursday night, causing panic to residents there.

While a forest department team drove the elephant back into the forest, two anti-poaching (AP) watchers, Saravanan and Vijayakumar, had suffered critical injuries during the operation.

But the jumbo again ventured out around 3 am on Friday and reached Podanur-Ganeshpuram where the wild tusker attacked one of the staff again.

The jumbo lifted Vijayakumar by its trunk and flung him to the ground. He suffered severe fractures on his shoulder and on one of his hands. The elephant then entered his house, trampled to death his 12-year-old daughter Gayathri, who was fast asleep.

The elephant then moved to Ganeshpuram and reached a private farm near Vellalore- Kanjikonampalayam road and began to raid the crops grown there.  Two women, Nagarathinam 50, Jothimani 68, who went there to the farmland to answer nature's call, also came under attack and were tragically stomped to death around 5.30 am. The elephant also killed an elderly farmer Palanisamy, 73, who rushed to their rescue on hearing their loud screams. 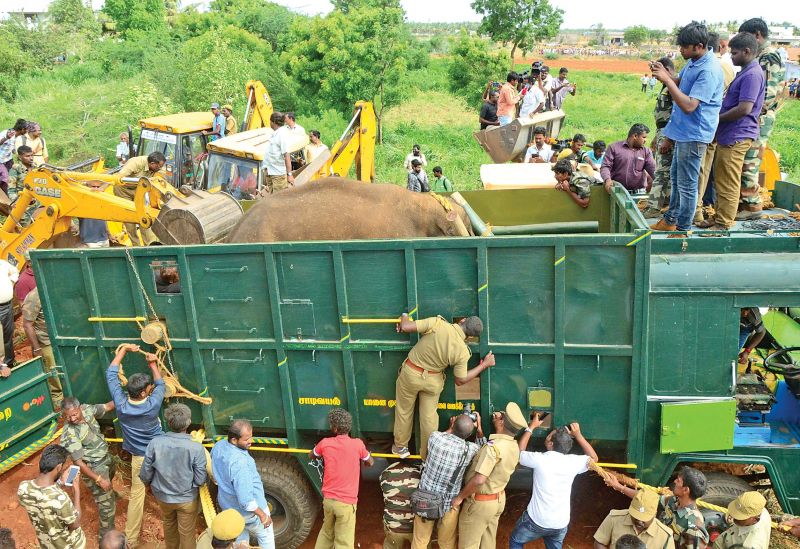 Wild tusker on being sedated, is being led into a lorry by JCB in Vellalore. (Photo: N. Balu Mahendran)

Neighbors, who noticed the tusker on the rampage around 7 am, informed the Forest department. Within an hour, CCF Anwardeen, conservator S. Ramasubramaniam along with 40 staff reached the spot, even as a 50-strong police contingent was deployed to avoid public entering the spot.

As many as four JCBs' and a 'kumki' elephant 'Pari' was brought to the spot around 9.30 am, to help tame the wild tusker. Initial efforts to bring the pachyderm out of the bushes were in vain.

Given the unfavorable terrain, the entire team waited till 1 pm in goading the wild tusker out of the bush using a JCB and the 'Kumki' elephant.

After the wild tusker came out, Forest department veterinary doctor N.S.Manoharan gave a gunshot of 5-ml sedative medicine. When it turned subconscious, the Forest department watchers tied it using huge long ropes and pulled it to towards a lorry.

However, before the tusker could be loaded into the lorry, its consciousness level dipped further and squatted on the ground.

After ten minutes, it regained consciousness after Dr Manohran gave a recovery medicine, ran few feet away from the lorry and remained there refusing to get inside.

An additional dose of sedative administered by Dr Manohan 15 minutes later, helped the workers to load the pachyderm into the lorry, which finally left the spot around 2-50 pm to the Top slip elephant camp.