Hyderabad: Akhila Vijay Kumar top-ped the city with 97.8 per cent in commerce in the CBSE Class XII exams, Sameeksha Yadav huma-nities with 97.6 per cent and M. Sheikh Shefnaan Fahad stood first in the science stream in the city with 97 per cent. 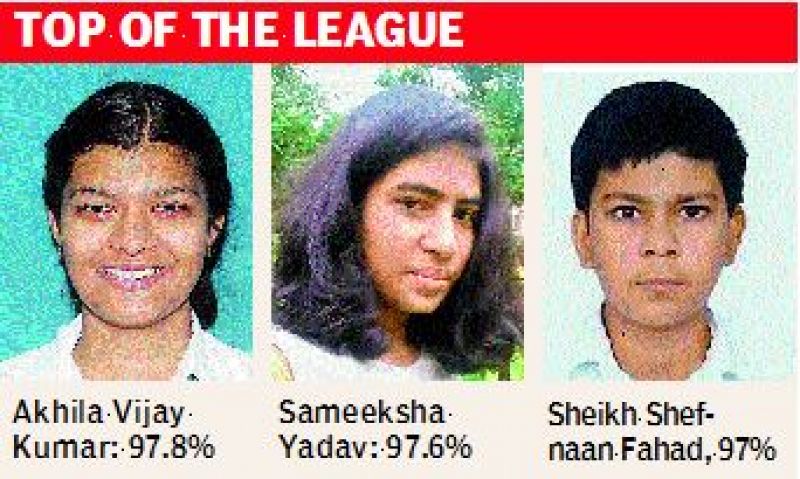 The CBSE released the results of its Class XII exams on Thursday, a record 28 days after the exams were held for more than three lakh students.

Speaking to Deccan Chronicle, Akhila, a Delhi Public School, Hyderabad, student, said, “I knew I did well, but I was not expecting this.” Explaining how she did it, she said she rewarded herself with videos on achieving tiny study goals. She believes that focused study for a few hours is enough to score high, rather than tiresome long hours of preparation. Both of her parents work for a private company and are from Hyderabad.

Sameeksha Yadav of the Army Public School, the humanities topper with 97.6 per cent, said she would like to study international law either in New Delhi or Bengaluru and is preparing for all the entrance exams. Practice and ha-rd work were her secrets of success.

Sameeksha’s family is a native of Gurugram; her father is an Army officer and her mother a teacher.

Fahad said he beat his own expectation of getting about 95 per cent. “I was in tears of joy. Since day one I was focusing on time management and studying the important points where the marks can be obtained. My focus was completely on my exams.” Fahad scored 99.79 percentile in the JEE-Mains and got 2,500 rank and is preparing for the JEE Advanced.

A total of 31,14,821 students took the Class X and Class XII board examinations this year including 28 transgenders.

Exams were held at 4,974 centres across India and 78 abroad in February-March.

More girls than boys passed in all categories. A total of 88.7 per cent girls, 83.3 per cent transgenders and 79.4 per cent boys passed the exams.

Telangana's COVID-19 spike is 'just the beginning of what is in store', say experts