Bhim Army Sena members stop a train during Bharat Bandh call given by Dalit organisations against the alleged dilution of the Scheduled Castes and Scheduled Tribes act, in Patna. (Photo: PTI)

New Delhi: Apprehending that the ‘Bharat Bandh’ by Dalit groups over dilution of the SC/ST (Prevention of Atrocities) Act could hit the BJP hard in poll bound Karnataka and the forthcoming elections, the Modi government on Monday asserted that it will argue the matter  with “full authority” in the Supreme Court for the verdict’s reconsideration.

Amid violent protests by Dalit organisations in different parts of the country, including in BJP ruled states of Uttar Pradesh, Madhya Pradesh and Rajasthan, party president Amit Shah held a meeting at the party headquarters to gauge the situation and also sought feedback. The meeting was attended by Union minister Piyush Goyal and national general secretaries Anil Jain and Bhupendra Yadav.

The BJP asserted that its “commitment to SC/ST welfare is unwavering and time-tested” and listed out the work done by the NDA government for the communities.

Supporting the ‘Bharat Bandh,’ Congress president Rahul Gandhi alleged that “keeping Dalits at the lowest rung of Indian society is in the DNA of the RSS/BJP. Whoever dares challenge this position is suppressed with violence,” he said adding he saluted “brothers and sisters” from the community who have hit the streets to demand protection of their rights  from the Modi government. 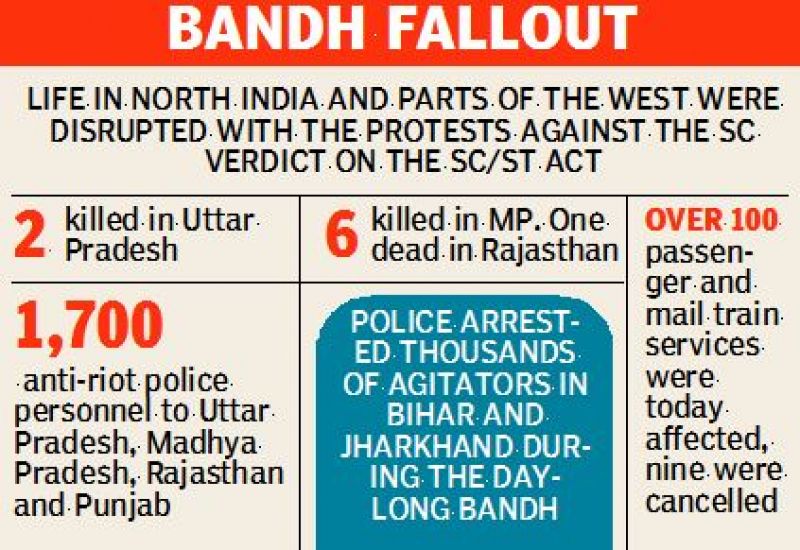 Hitting back, the BJP accused the Congress and Mr Gandhi of “exploiting the Dalits for petty political gains” and extracting political advantage out of the issue. The party also listed BJP-led government’s actions in favour of the marginalised sections, including giving the country a Dalit president.

“Today, we have filed a review petition in the Supreme Court. It is important to note that the  government was not a party in the proceedings at all...On behalf of the Ministry of Social Justice and Empowerment, every comprehensive review has been filed and the government, with due respect, does not agree with the reasoning given by the apex court,” said Union law minister Ravi Shankar Prasad in the Parliament House complex.

Alleging that there was a “poisonous campaign” against the Sangh over the apex court's order on the issue, RSS’s Bhaiiya Joshi said that laws like the SC/ST Act should be invoked stringently and supported the Centre's review plea.