Sugar brews a bitter pill for HDK and Belagavi

According to Indian Sugar Manufacturers’ Association, in Karnataka, 36 sugar mills are in operation as on 15th November 2018 and produced 1.85 lakh tonnes of sugar as compared to 59 mills which produced 3.71 lakh tonnes last year in the corresponding period.

As farmers’ distress grows across the country, with thousands converging on Mumbai and Delhi, posing a huge challenge to the Narendra Modi-led NDA government as it heads into election year, winds of discontent are similarly sweeping across the lush green sugarcane fields of Karnataka. With less than 10 days to go before the crucial winter session of the legislature convenes in Belagavi on December 10, N.B. HOMBAL studies the genesis of this crisis which could well sour the dream run of the ruling Congress-JD(S) coalition in the heart of ‘sugar country’. Everyone knows that sugarcane continues to be a crop which can upset many a political calculation, for most sugar factory owners are also powerful politicians who have made their riches from the sweet, shining crystal. The three biggest sugar manufacturing states in the country - Uttar Pradesh, Maharashtra and Karnataka together send 156 of the total 543 MPs to the Lok Sabha and most of them are acutely aware of the fact that unrest in this sector cannot be allowed to remain unresolved. In recent weeks, Karnataka has seen a series of protests by farmers in a face-off with sugarcane factory owners over pending dues and the price at which sugarcane is procured by factories

With more than 10 lakh sugarcane farmers in Karnataka alone, both political parties as well as farmer leaders are jostling to grab prime time in the name of protecting farmers, giving rise to the question - Is the current conflict politically engineered or is it the vagaries of the market and dipping sugar prices that have made mill owners chary of paying more to farmers? Or should the blame be put on the mill owners who are unwilling go give a bigger chunk of the profit pie to farmers despite making more money from not only sugar but its by-products too?

Consequently, in the financial year 2017-18, India’s total sugar production was 32 million tonnes but consumption was around 25 million tonnes. With the steady decline in consumption, the union government has steped in to help mill owners by promoting Ethanol production, a direct spin off from sugarcane. Ethanol blending with petrol has grown from five per cent to 20 per cent, and this has also become part of the country’s biofuel policy.

But millers are apprehensive about the union government’s decision, as the base price of Ethanol is fixed only for the present crushing season. The millers believe this is a dangerous position. If they go ahead and set up a new plant to convert sugarcane into Ethanol as they would like to, only for the base price to be slashed in the next season, they could be in dire straits.

Interestingly, the state government which has borne the brunt of the farmers’ agitation, does not have much role to play in policy making. It is the Union government which calls the shots in every aspect from policy to movement of this commodity besides fixing the sugarcane price.

So how did the current standoff arise? Farmer leader, Subhash Shiroor squarely blames sugar mill owners turned political leaders for the crisis as they decide how much the farmer should get for the crop he has grown painstakingly. “Fair Remunerative Price (FRP) for sugarcane fixed by the Centre too is one such tool. Policy makers in the union government have close links with the sugar lobby. In the last one decade, sugarcane price which used to be fixed on the basis of 8.5 per cent recovery rate, is now fixed on the basis of  10 per cent in 2018-19. This happened because the sugar lobby is too powerful and the farmers don’t wield the same clout,” he says. 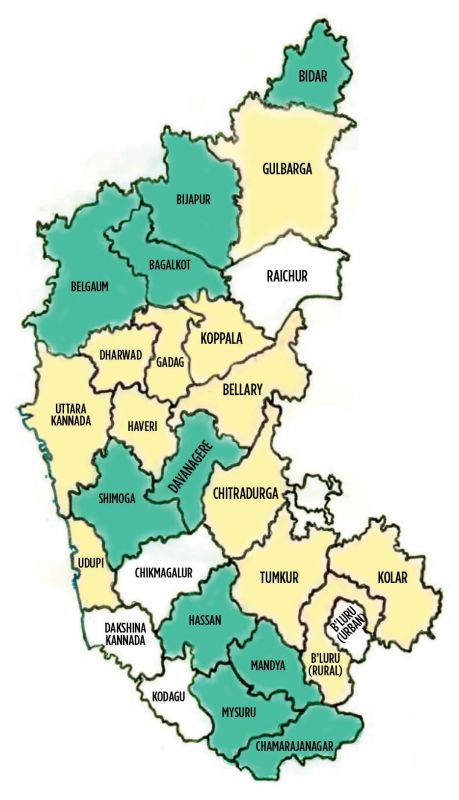 He adds that mill owners do not adhere properly to this FRP and try and find loopholes to cheat farmers. “The mill owners have started transferring harvesting and transportation charges onto farmers deducting it from the meagre Rs 2,750 per tonne of sugarcane they are paid. The sugar lobby is strong and does not allow the government to calculate on the basis of all products and by-products from sugarcane. Actually, the profit earned by millers is huge when compared with that of farmers,” he claims.

CHEATED
Woman farmer leader, Sunanda Jayaram who is part of the Cauvery family, too claims that mill owners cheat farmer in every possible way be it in weighing sugarcane or disclosing the sugar recovery rate.

According to South Indian Sugarcane and Sugar Technologists Association’s governing council member, Dr M. Swamy, be it import or export policy, releasing and fixing quota for each sugar factory to release sugar in the domestic or  international market it’s decided by the union government. ‘’But when the farmer does not get his price from millers, their anger inevitably gets directed towards the state government.”

He adds that with the rapid progress in technology, the millers do not have much scope for cheating, by giving the wrong information about recovery rate.

“It is a well established method, millers have to disclose how much sugarcane they have crushed and at what rate. This report is submitted by the millers on a daily basis to the government. Hence, there is very little scope for them to cheat,” he argues.

Dr  R. B. Khandgave, director,S. Nijalingappa Sugar Institute at Belagavi, explains why sugarcane is so popular and why the sugar industry enjoys so much clout. “Sugarcane is the most profitable crop and its power is because of this. Every sugarcane farmer is aware about the rate he is going to get even before he sows the crop. There are no middlemen; they get the price credited to their account directly from the mills. Therefore, annually, the area under sugarcane cultivation is increasing at least by 10 per cent nationally,” he says.

The FRP may not be 100 per cent perfect but it is the best mechanism available at this juncture. “The Union government’s statutory body - Commission for Agricultural Costs and Prices - forecasts  FRP based on a thorough scientific study taking crop cycle, production,  recovery rate and so on into consideration. The FRP is generally fixed on the higher side which is advantageous to farmers.

Over the years, due to technological innovations, recovery rate in the country too has gone up from 8 per cent about 15 years ago to 12 per cent at present. On the flip side, the CACP’s prediction of sugar rates in the market has always raised questions. Last year, the CACP predicted the sugar rate at Rs 36 per kg in the market but it traded at Rs 27 in the domestic market. Hence, to blame millers alone for the crisis does not make sense. I believe both millers and farmers are equally dependent on each other like two wheels of the same cart,” he rationalises.

NOT SO SWEET
So how does the government resolve the not so sweet crisis which the sugarcane farmer brought to Bengaluru recently demanding that the factory owner pay him a better price? Maybe, it’s time a middle path is found so that the sector is not perpetually gripped by  uncertainty and volatility-this is possible only if there is give and take and the sugar mill owner realises that his relationship with the farmer is a symbiotic one and he can thrive only if the grower is a happy soul. As for the farmers, they would be better off keeping a safe distance from cunning politicians who are out to make a ‘killing’ from their woes.

Sugar is a product which has added enormous wealth to the coffers of Karnataka and to continue doing so, the sector can hardly afford to have distrust and discord between its main stakeholders - the farmer and mill owner.

CONTRARIAN VIEW: WHY ARE SUGAR Co-OPERATIVES NOT PROFITABLE?
South Indian Sugar Mills Association - Karnataka president, Anand Reddy feels that the genuine farmer was never upset with millers and the issue has been blown out of proportion because of the unnecessary intervention by a section of farmer leaders. There is a constant effort by these leaders to demonise millers. “The way things are going, the day they spiral out of control is not far off. The sugar industry too may meet its doom like Mumbai’s once flourishing textile industry which petered out due to one man – trade unionist Datta Rao Samant,” he argues.

He also challenges the contention of farmer leaders that mill owners are making huge profits.  “Then what ails the co-operative sugar factories which are run and managed by farmers themselves? Why aren’t these units making huge profits and disbursing them among farmers? I dare farmer leaders to take charge of any-co-operative mill and pay sugarcane farmers the rates which they are demanding from us,” he said.

According to him, sugar is an investment heavy industry and time and again requires auxiliary units and also infusion of working capital.

“Farmer leaders` demands are sometimes unreasonable. How can I share profit from a by-product? Haven’t we invested to set up an auxiliary unit to extract another product? Sugarcane has three by-products - bugasse, molasses and press mud. To convert these into new products - bugass to power or paper and molasses to Rectified Spirit, Alcohol or Ethanol, we need to set up different types of units. Hence, the very demand that the price we pay for sugarcane should also include profits from these products is wrong,” he contends.

Rahul Gandhi to state governments: Accept coronavirus as the problem and fight it

Ecommerce products may be asked to name manufacturing country