The serai at the Qutb Shahi tombs.

Hyderabad: Phase 2 of the restoration project at the Qutb Shahi tombs on the Hayat Baksh tomb, hamam, serai, Idgah bowli and the South Gate has revealed some surprising details.

Thirty monuments have been restored under Phase 1. Wherever the heritage department and stakeholders have not been able to understand the design, the patch has been left untouched for now. There are a total of 80 archaeological sites in the Qutb Shahi Heritage Park.

The first phase saw 500 tonnes of cement removed from the site. Mr Yoshowant Purohit, project manager at the Aga Khan Trust for Culture, explained, “There were too many layers of cement which was done over the years. The last major restoration works were carried out by Salar Jung. To get to the original wall there had to be constant careful scraping.” 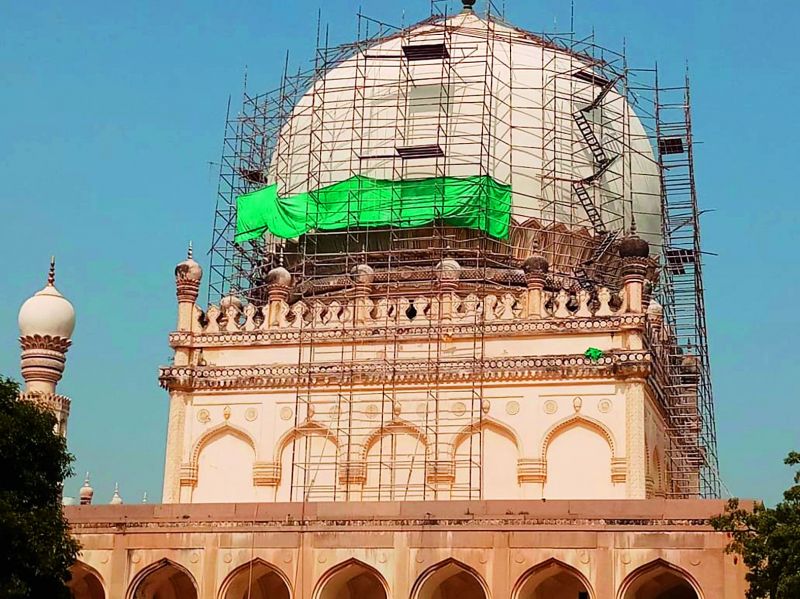 Restoration of the Hayat Bakash tomb.

At the hamam where Phase 2 work has begun, the original stone floor was under five feet of sand and mud which were dumped from time to time. The original floor which is now visible shows that it is not the mortuary bath as believed.

The hamam is next to the serai and it is believed that it was a bathing place for travellers who came to Golconda. The water channels are still active. There is a huge massage stone in the middle and there are hot water channels to give a sauna effect.

The closed ventilation systems have now opened, and show the hamam as a well-ventilated structure with hot water baths

A part of the serai which was completely broken down on the opposite side is being recreated.

The works at the South Gate are being carried out to find an actual connection to Golconda. But that would take time as the restorers are still dealing with a lot of mud, earth and rubble.

There is encroachment in the area that houses 80 monuments and that is another major hurdle. Asked about the encroachments, director, department of heritage, N.R. Visalatchy stated the matter was in court and said she could not comment.

The completion of Phase 1 works has resulted in more visitors going to the main tombs. Schools are being encouraged to bring their students for field trips to the tombs.

According to records maintained by the department, there were about 200 visitors on week days and 500 on weekends.

There are many tombs belonging to unidentified persons which have been numbered for restoration and cleaned of vegetation and restored to their original form. They have black slabs and markings which shows a mix of Persian and local culture of those times.

Temple construction may begin in April

Vijayawada: Green report does not mention pollution at all