Kodagu, beware of another Aasare fiasco!

As many as two hundred people died due to the flood in Benne Halla stream and many rivers in the region in 2009.

As Kodagu battles a tragedy of unprecedented proportions, one’s thoughts go back in time to 2009-when the whole of North and Coastal Karnatala were ravaged by devastating rain and floods which left more than 200 people dead while thousands of crores worth property including houses were destroyed leaving lakhs homeless. Then came the massive relief and rehabilitation effort, aided by a generous infusion of funds from the government, NGOs and philanthropists and more than a lakh homes were built for the flood-hit under the much touted Aasare scheme. But what finally happened to these houses? And why did people not move into them when these houses were specifically built for them? What has now jolted people and administrators alike  is the fear of another flood after the final award of the Mahadayi Water Dispute Tribunal allotted 13.4 tmcft of water to Karnataka from Mahadayi river.   The Kodagu floods are fresh in every Kannadiga’s mind but these villagers still prefer not to occupy the thousands of houses built for them-reminding all those who live in fear of nature’s fury of how an insensitive government made a token gesture of providing ‘houses’ which were more suited for cattle and are now testimony to a massive waste of funds running into crores. Vittal  Shastri finds out what went wrong in the relief efforts in North Karnataka so that the Kodavas can take preemptive steps and make sure they does not have to face the same plight.

Nearly a decade after flash floods devastated North Karnataka, the fear of another deluge continues to haunt forty-four year old farmer Hanumantappa Munavalli of Menasagi village in Gadag district. He has been living in his old house though a new home was built for him under the Aasare scheme.

Call it a tragedy or a farce, as many as fifty percent houses built for the flood victims in these villages have turned into a natural habitat for jackals, wolves, snakes and rodents. The flood victims are scared to go even near these homes built on 128 acres of land which is dotted with  thorny bushes. The people of the entire village, which has a 10,000 strong population, abandoned the Aasare  houses several years ago due to lack of proper amenities including drinking water, roads and power.

As many as two hundred people died due to the flood in Benne Halla stream and many rivers in the region in 2009. Several companies, non-governmental organisations and foundations donated funds and material for construction of houses in the 14 affected districts after the state government requested them to come to the rescue of the rain-battered people. Around 140 villages were fully shifted and an equal number partially shifted under the Aasare scheme.

But these houses now present a shocking sight; most of them are in a dilapidated condition as the flood victims have preferred to live in their old houses after repairing them. 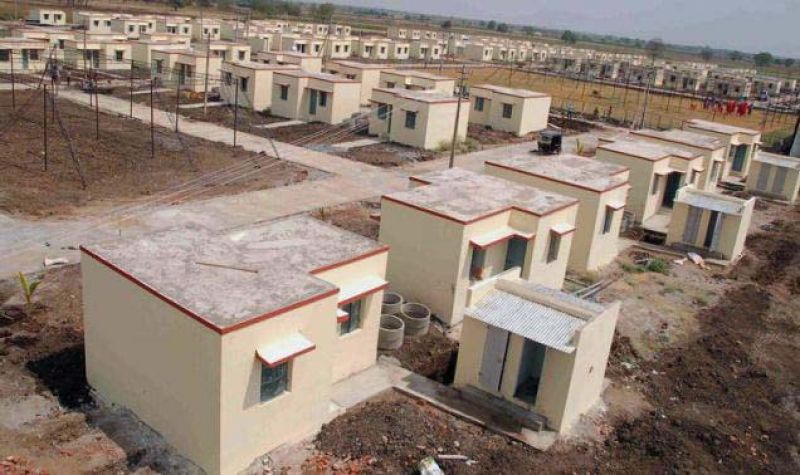 What has now become a major cause of worry for those living on the banks of Benne Halla and Malaprabha river is the possibility of floods after the diversion of Mahadayi water as per the recent verdict of the Mahadayi tribunal. “We abandoned our village for a few months after our houses were filled with 6-feet deep water during the floods nine years ago. Now, we are living in the same houses as it is difficult to move to the new homes which are far away from my farm land situated on the banks of Malaprabha river and Benne Halla stream. Moreover, we cannot live in the new houses with cattle as they are very small in size”, farmer Hanumantappa Munavalli said.

These flood victims also fear a harrowing time during the heavy rains as there is a chance of their new homes collapsing. Crores of rupees utlised for building the Aasare houses have gone down the drain as the new houses have turned into dens for illegal activities. While shepherds are using the new houses to provide shelter to their sheep, the doors, windows and other materials used for constructing the houses have been stolen by miscreants.

“A mere 50 per cent of the new homes are occupied by the flood victims and the rest are vacant in our village. Many people fear the new houses may collapse owing to poor quality of construction material used by the contractors who failed to fulfill our demand to build the homes with 15-inch thick, and 9 ft high walls. We also need lofts to store things. Moreover, the diversion of Mahadayi water will pave the way for another flood as I have already seen three floods in my lifetime”, said fifty-two year old flood victim Imamsab Mujawar, resident of Benal village in Hungund taluk of Bagalkot district.

Interestingly, the flood victims of several villages in Gadag district had appealed to the government to allow them to build the new homes on their own. They had sought only compensation and construction material. But, the idea did not go down well with the government which allotted the project to its own agencies.

“We had submitted a proposal to retired IAS officer S.M. Jamdar seeking permission to build the houses on our own when he was heading the rehabilitation operation. But, the government did not pay heed to our demand. Due to this, more than 90 per cent of Aasare houses built in Holemannur have fallen vacant. We  continue to live in the old homes as the new settlement is far away from our old village and the homes are very small”, said  former gram panchayat president Somu Udemani of Holemannur village in Ron taluk of Gadag.

The Aasare fiasco in North Karnataka could have been avoided if the government had considered local sentiments and people’s needs carefully instead of blindly implementing a rehabilitation project. It’s time the Kodavas put the rehab schemes being planned by them under the scanner and made sure they do not turn victims of another colossal,  state-made disaster-after a natural disaster took away everything they had including the roofs over their heads.