Chennai: In what is being seen as a big respite, the groundwater table in the city has considerably increased in July, bringing cheer to water managers. A study conducted by the city-based organisation Rain Centre, suggested that government implement the rain water harvesting system (RWHS) in 2003, shows a slight increase in the groundwater table in July. Data accessed by DC reveals that the members conducted a groundwater study in 88 monitoring wells across the city and when comparing July 2016 and 2017, the water table shows a notable increase with only some places drying up. 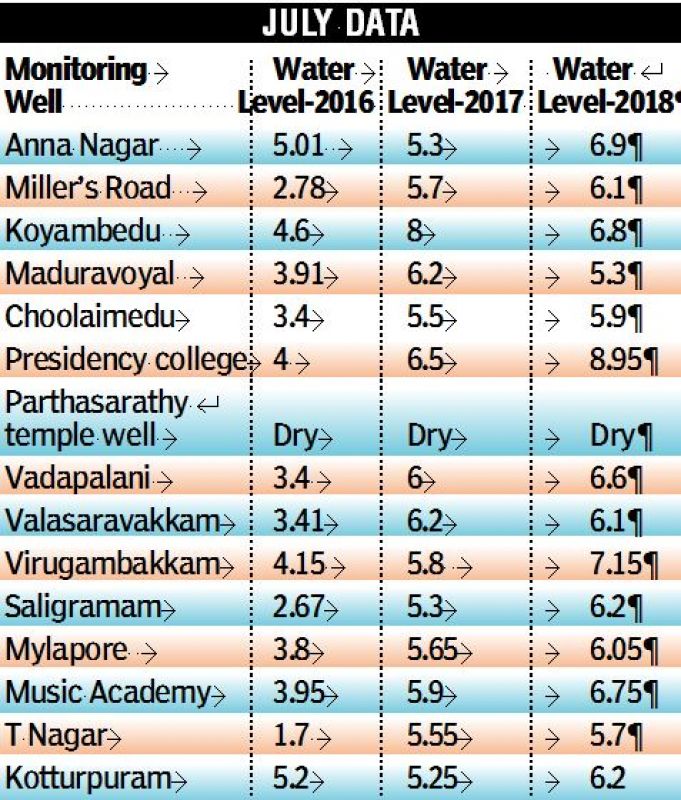 Sources said that the city had not received rain in 2016 due to Vardah cyclone and in 2017, there were only two heavy spells of rain during the northeast monsoon. In such a condition, members of Rain Centre monitoring wells and water table in the city, conducted a groundwater study for July. The study noted that groundwater has slightly increased in places like Anna Nagar, Koyambedu, Vadapalani, Virugambakkam and Cancer Institute. Dr Sekhar Raghavan, director of Rain Centre, told DC, “We have been conducting a groundwater monitoring study since January 2015 and there are 88 monitoring wells across the city where water level and total dissolved solids (TDS) are noted every month. Since there is no summer rain in May, groundwater level in June took a dip. However, the city has been receiving intermittent showers because of which there is a considerable improvement in groundwater level in July. However, there is no groundwater in a couple of wells located in Parthasarathy temple and Mylapore,” Sekhar pointed out. He also suggested that it can be improved if RWHS
is taken more seriously.

Meanwhile, water managers are happy about the increasing ground water level. The Chennai Metropolitan Water Supply and Sewerage Board (CMWSSB), which usually releases details of the ground water table once in four months is also in the process of conducting a study in wells. “Rain Centre’s study relating to ground water is happy news to us. As the city suffered a setback in the last two years in terms of decline in ground water, the study comes as a big relief not only to the CMWSSB, but also to residents of the city,” said an official of the CMWSSB.

Over 2,000 bodies found in Ganga river