The force is with Tejas, finally

A priest performs a puja near the Light Combat Aircraft (LCA) Tejas during a ceremony for its induction into the IAF, at HAL in Bengaluru on Friday.

BENGALURU: A traditional Indian blessing -complete with the blowing of a conch, a Sarva Dharma Samaroh and the chanting of the Maha Mruthyunjaya mantra-marked the launch of IAF's first squadron of Made-in-India 'Tejas' combat jets here on Friday, that took to the skies, sporting IAF colours after 3,000 flawless sorties after its maiden flight on January 4, 2001.

Billed as the world's smallest and lightest combat aircraft, it turned out as the smallest squadron of IAF, too, with just two jets constituting the No 45 Flying Daggers, a little over a month after Chief of Air staff Air Chief Marshal Arup Raha flew one of them and remarked "it is a good aircraft for induction into IAF operations." 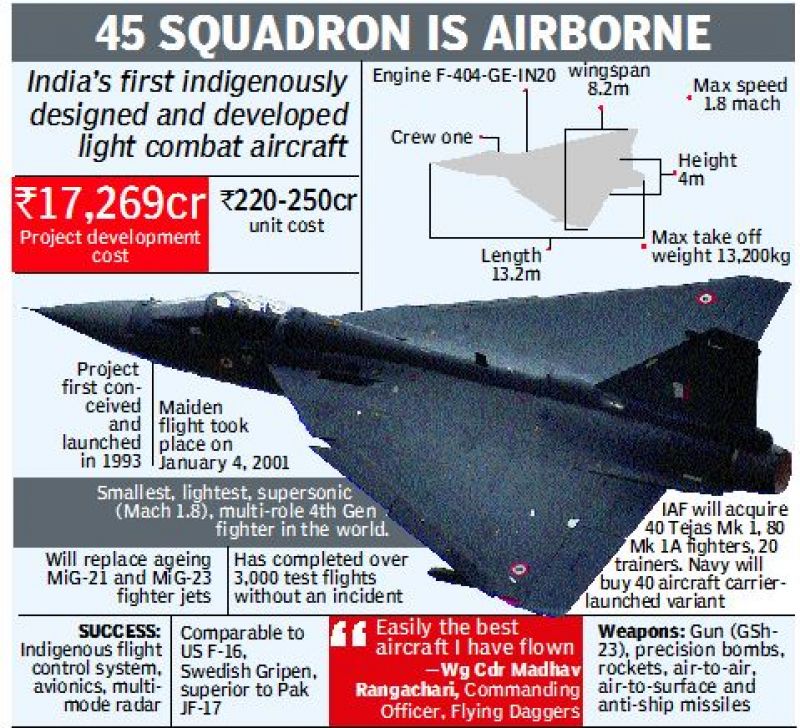 The military jet's design and development by Aeronautical Development Agency (ADA) with critical contributions in terms of technology and systems from several R&D institutions was plagued by delays because of sanctions imposed by the United States, post Pokhran-II, and failure to develop the indigenous "Kaveri" engine. Originally called the Light Combat Aircraft (LCA), the India -made combat jet, christened 'Tejas' (Radiance) by Prime Minister A B Vajpayee in 2003, defied all the odds. 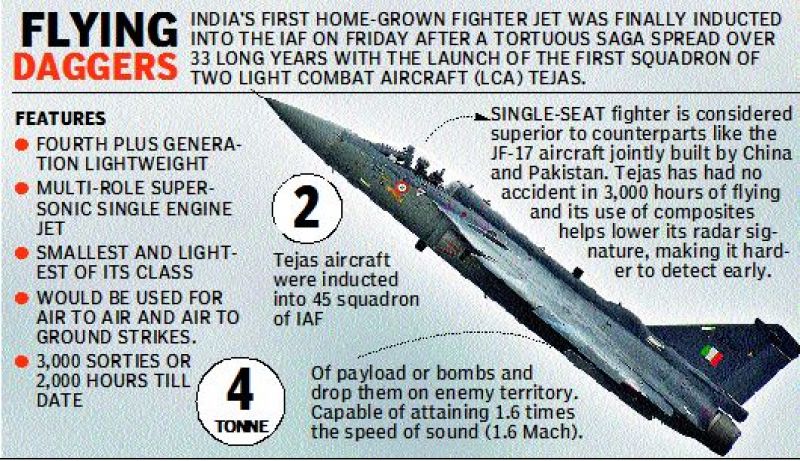 A naval variant and trainer variant have been designed and developed by ADA-HAL as part of the project which was formally launched in 1993. Wing Commander Madhav Rangachari, Commanding Officer, Flying Daggers:

"It's an excellent aircraft and a generation ahead of other fighters in the world. Being the only of its kind (light combat), it's not comparable with other military aircraft. It (Tejas) will be excellent for the air force, and we hope to get more such aircraft from HAL. I felt like being on top of the world when flying Tejas fighter. It's an honour and a privilege to pilot the inaugural flight of Tejas soon after its induction," at the end of a ten minute sortie with an overcast sky and windy conditions at HAL airport.

For light combat
In terms of the digital fly-by-wire flight control system, meant to ease handling by the pilot, as well avionics ‘Tejas’ is on par with JAS 39 Grippen manufactured by SAAB of Sweden. The digital flight control computer receives signals from a variety of sensors and pilot control stick inputs. Ditto with the ‘glass cockpit,’ which displays real-time information to the pilot, simplifying the navigation and operation, while allowing him to focus only on critical information. The indigenous combat aircraft, however, has an edge over the Grippen because of extensive use of composite materials which makes ‘Tejus’ the world’s lightest and agile fighter jet. Composite materials have been used for the fuselage, wings, tailfin, rudder, air brakes and landing gear doors. In flight, however, it could pass off as an advanced version of the French Mirage-2000 fighter because of its swept-back delta wing configuration.

1. ‘Tejas’ is perhaps the world’s smallest lightweight, multi-role, single engine tactical fighter aircraft. The project to design and roll out this aircraft was first conceived in 1993 though discussions about it commenced in the ‘80s.

2. The combat aircraft has been designed and manufactured by Aeronautical Development Agency (ADA), an autonomous society of DRDO, and Hindustan Aeronautics Ltd (HAL), Bengaluru, with several R&D institutions contributing in terms of technology and systems. It was originally meant to replace the ageing MiG-21 and MiG 23, but according to defence minister Manohar Parrikar the military jet could be employed for air-to-air and air-to-ground strikes and complement the Su-30MKI in large-scale operations.

3. It was christened ‘Tejas’ (Radiance) by Prime Minister A B Vajpayee in 2003, two years after its maiden flight on January 4, 2001. It has flown in Aero India air shows since 2001, and made its debut in the international air show at Bahrain in January 2016.

4. ‘Tejas’ caught the attention of air force chiefs of Sri Lanka and Egypt during the air show at Bahrain with both countries evincing interest in acquiring the current version of the military jet. Two factors that could be described as its USP are its low cost (`250 to `300 crores each), and agility in the skies.

5.In May 2016, IAF Chief Air Chief Marshal Arup Raha flew ‘Tejas’ for more than 30 minutes, simulated air-to-air and air-to-ground strikes, and remarked “it is a good aircraft for induction into IAF operations.” His hands-on experience onboard the fighter jet could well be described the turning point as the first squadron was commissioned within two months.

6. The ‘Tejas’ aircraft will make up the “No. 45 Flying Daggers” squadron which will be based first in Bengaluru and moved to Sulur in Tamil Nadu after a couple of years.

7. The IAF plans to acquire 120 ‘Tejas’ combat jets. Of these, 80 aircraft (Tejas 1A) will come with more advanced technology such as the Active Electrically Scanned Array (AESA) radar, unified electronic warfare suite, mid-air refuelling capacity and advanced beyond the vision range missiles.

8. As per the production plan, six aircraft will be made this year (2015-16) and HAL will subsequently scale it up to eight and 16 aircraft per year. All squadrons of ‘Tejas’ will consist of 20 combat jets, including four in reserve.

9 The IAF has rated ‘Tejas’ better than JF 17 jointly developed and built by Pakistan and China because of its agility, precision guided missiles and beyond visual range (BVR) missiles.

10. The Union government has spent `17,200 crores on the project, which includes technology demonstrators, prototypes, and the trainer and naval variants.

BJP chief may take a rath for West Bengal elections