DECCAN CHRONICLE. | CH V M KRISHNA RAO
Published May 2, 2017, 1:45 am IST
Updated May 2, 2017, 9:20 am IST
Heated arguments between officials of both states over release of water witnessed at Nagarjunasagar.

Hyderabad: In a repeat of the ugly incidents of February 2015, TS and AP irrigation staff of various circles at the Nagarjunasagar project reached the dam and resorted to arguments after TS staff stopped release of water to the Nagarjunasagar right main canal that serves Seemandhra region.

Nagarjunasagar dam chief engineer S. Suneel who controls the operations for the entire dam, like the AP chief engineer controls Srisailam dam, ordered stoppage of water to the right main canal stating that AP has overdrawn its quota stipulated by Krishna River Management Board. Soon after, the assistant and deputy executive engineers of AP complained to their chief engineer V. Veer Raju.

The commotion on the dam lasted over two hours with staff and police reaching the head sluice of the main canal.

While one group pressed for release of water and tried to break the locks of the sluice gates, the other group tried to stop them.

The Special Task Force, in charge of the security of the dam reached the spot and pacified the warring groups and managed to clear the area.

Later, defending closure of the sluice gates, Mr Suneel told DC that in its orders pertaining to water release between February and April, the KRMB had allotted 47 tmc ft to AP and 31 tmc ft to TS. He said that according to their calculations, AP had over drawn 2 tmc ft and hence he had ordered stoppage of further release from Monday morning.

Mr Suneel also said that the Nagarjunasagar dam level had reached 504.9 ft on Monday, and if any further releases were made from the dam, it will be difficult for them to meet the drinking water requirements of Hyderabad as well as Nalgonda and Ranga Reddy districts. “I followed allocations stipulated by the KRMB,” he said.

However, Mr Veer Raju said there were different allocations made to different projects under the NS dam. “Of the 5.6 tmc ft allotted to main canal, so far we got only 3.6 tmc ft,” he said.

“Even taking into account evaporation and transmission losses, we still need to get another 1.2 tmc ft but TS officials, acting in a dictatorial manner, ordered closure of gates in the morning. I lodged an official complaint with the KRMB member secretary and we are awaiting response,” Mr Veer Raju said.

Meanwhile, Mr Chatterjee has convened a meeting of the three-member committee on Friday.

He told this newspaper, “I am in process of ascertaining the details on what actually happened today at the dam site. I have received complaints from both the sides and I am talking to officials of both the governments. I think Andhra Pradesh still has a share as per our earlier water release orders. However, officials of both the states sometimes don’t implement the Board’s orders; this has happened many times at Nagarjunasagar. I am looking into it.”

Panel to take stock of levels
A three-member committee  will meet on Friday to take stock of the water storage levels at the Srisailam reservoir for the drinking water needs of both TS and AP. 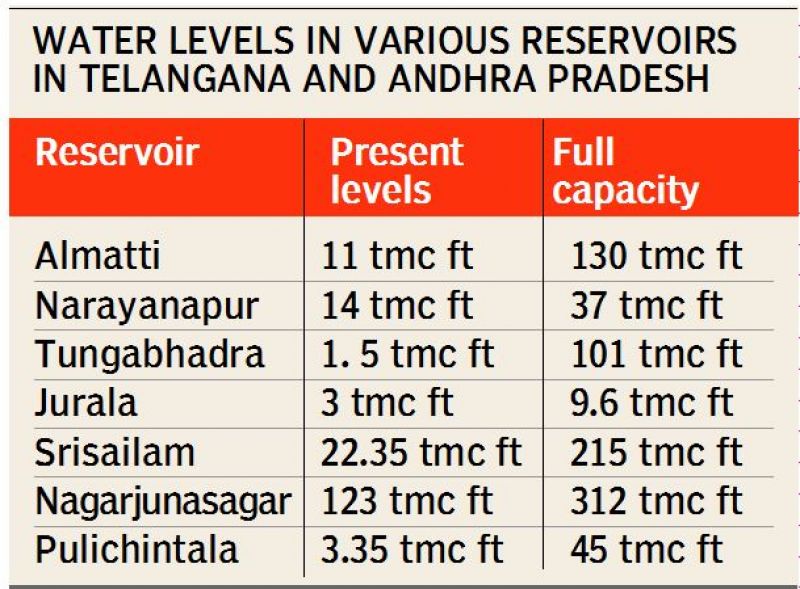 The water level at the Srisailam dam touched 785 ft on Monday, the same level on the corresponding day last year.

With just 22.35 tmc ft of water available between the 785 ft mark and the and riverbed-level, the committee will have to look into the drinking water needs of both the states up to the first week of July, when the southwest monsoon will start making its impact.

“I have already asked both the states to come forward with their indents for fresh releases only for the purpose of meeting drinking water requirements and nothing else,” Mr Chatterjee disclosed.

With the storage at 785 ft level, there cannot be hydel power generation as the present level is much below the required levels of 800 ft (Right Bank powerhouse on the AP side) and 805 ft (Left bank powerhouse on the Telangana side) and any further release from Srisailam to Nagarjunasagar dam will only be possibly by opening the sluice gates that were operated up to 750 ft last year.

Considered as the worst year in the in Krishna Basin, especially for projects in Karnataka, the situation as of now is precarious.

Heavy to heavy rains in Mahabaleswar, where the Krishna originates, is the only hope to ensure good flows into all the reservoirs