NEET has no clarity on dealing with quotas

The Medical Council of India notifications issued in 2010 and 2012 to hold Neet for medical and dental college admissions stipulated that reservation of seats for the respective categories will be done as per prevailing laws. (Representational image)

Hyderabad: With the Supreme Court ordering repeatedly that the National Eligibility-cum-Entrance Test (Neet) would cover all medical and dental college seats countrywide, confusion prevails over the status of state-level reservation quotas.

The Medical Council of India notifications issued in 2010 and 2012 to hold Neet for medical and dental college admissions stipulated that reservation of seats for the respective categories will be done as per prevailing laws. There was no specific mention of the reservation quota in individual states — each state has its own specific quota requirements. Tamil Nadu has 69 per cent reservation which is protected by the 9th Schedule of the Constitution, Maharashtra 52 per cent while Karnataka, AP and TS have 50 per cent.

In AP and Telangana, the 50 per cent quota includes the 4-per cent for Muslims.
Besides, each state has its own pecularities. The Reddy community is in the general category in TS and AP, but is listed as a Backward Class in Karnataka. It is not clear if a student from the Reddy community from AP or TS can claim reservation in Karnataka. Similarly, Muslims get  four per cent quota in TS and AP. It has not been clarified in the Neet order if a Muslim student from TS and AP can claim a seat in the general pool in. 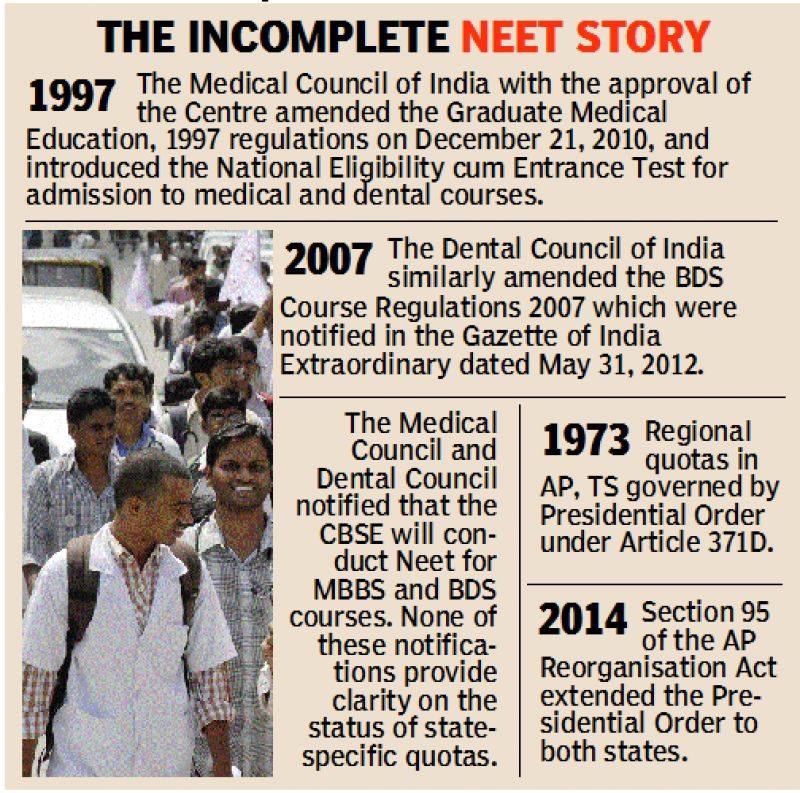 Now, out of 100 seats in a private college, half the seats form part of the convener quota for merit students. There is a 35 per cent management quota, and a 15 per cent is NRI quota. The MCI has not said how these quotas will be adjusted.

Legal experts are waiting to see how the Medical Council of India goes ahead with a common nationwide admission process when each state has its own set of rules. High Court advocate S. Sriram, who has studied Medical Council of India matters, pointed out that so far there was no clarity with regard to the reservation and admission process. He said, “While a common entrance test and transparent admission process is welcome, hasty implementation of a policy that lacks clarity would only create confusion among students.”

Maintaining that special status accorded to TS and AP has to be looked into while bringing them under the purview of Neet, Mr Sriram said, “The requirements of the Presidential Order and the implications of Section 95 of the AP Reorganisation Act need to be looked into.”

The Presidential Order provides for “regional equalities” for students between  TS and AP. Dr N Appa Rao of the Indian Medical Association, who secured a stay of the Neet notification in 2011-12, said local students would suffer if both government did not resist Neet.

He said a majority of students in the two Telugu states are strong in the biological science stream whereas students from northern states are better prepared in physics and chemistry. This could render the results askew. He reminded that in 2012, the then AP High Court had stayed Neet in undivided AP after considering the fact that the provisions in the MCI notification for Neet were in violation of the special status granted to the state.

Telangana Private Medical and Dental Colleges Association president C. Lakshmi Narasimha Rao said the group will hold its own entrance test this year to fill B category seats.Vice-chairman Syed Azaz-Ur-Rahman of the Shadan Educational Society, which runs the Shadan Medical College, said, “We and Owaisi Medical College made admissions based on Eamcet rankings without conducting a separate test, though we have the right to hold the test.

This time we await the final outcome of the hearings on Neet in the Supreme Court.” He said, “We are told that state rankings will be awarded by taking state as a unit in the results of the Neet.”