The school and the collaposed classroom.

Chennai: The students of class 3 of the Panchayat Union School in Kavanthandalam, Kancheepuram, on Monday escaped tragedy by a whisker, after the roof of their classroom collapsed, around half-an-hour before they were to return for classes.

Sources said nearly 137 students from classes 1-8 attend classes in the middle school. The campus has three blocks of single-storeyed buildings, all partitioned to serve as classrooms. The buildings, simple tile-roofed structures, were reportedly built long back, with alleged no maintenance on the part of the village administration all these past years. 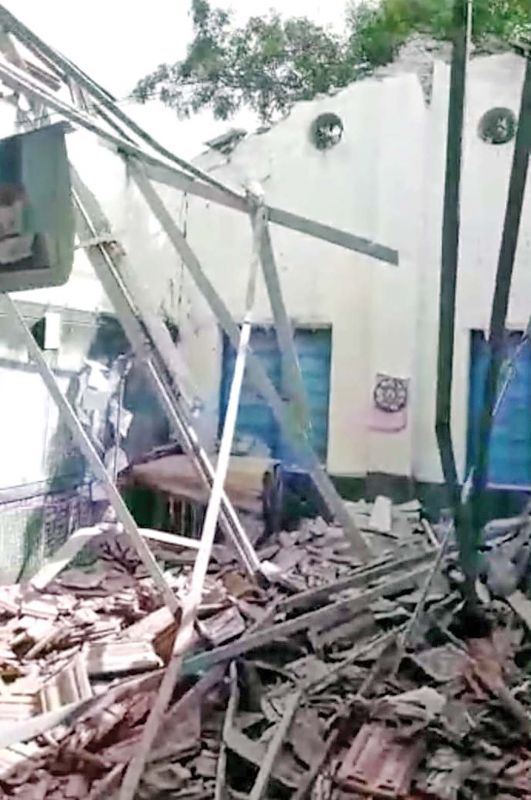 The parents of the students said they had several times on earlier occasions made complaints about leaks, and the weak building structure. The school reportedly cancelled classes during rains. The room which collapsed on Monday has 35 kids.

It was fortunate that the children had reportedly gone out for lunch after the 12.45 noon bell, since all the students were provided lunch under the midday meal scheme, and all ate together on the campus grounds.

Around 1:30 pm, the roof of class-three crumbled with a loud rumble. Shocked kids gathered around and teachers rushed to the spot, even as nearby residents began running to the school in panic. Irked villagers, mostly parents, began a heated argument with the school staff over the safety of the children. Headmaster Thirumalaivasan took the initiative to pacify them. Kancheepuram taluk police also arrived at the spot and pacified the crowd.

Talking about the incident, Chief Educational Officer Angelo Irudhayasamy expressed regrets that the children had to stay in such conditions. Though the education department may take decisions regarding policies, providing infrastructure was not under their purview. As this was a panchayat union school, the Block Development Office was responsible for building maintenance.

Just six months back, the headmaster had approached the Block Development Officer (BDO) with a complaint about the dilapidated condition of the buildings. But, no action was taken, added the CEO.

For the parents, the ordeal has had a silver lining too. Despite all these years of neglect, at least now, the BDO will have to construct new buildings, said a parent. When contacted, the Block Development Officer, Kancheepuram, refused to comment.