A graffiti that appeared on the wall of University Stadium, Thiruvananthapuram, reads “are you uncomfortable only when it’s a dalit’s body?”

Thiruvananthapuram: A day after Ernakulathappan temple administration reportedly said that the body of artist Ashanthan should not be displayed in front of the Durbar Hall as it would desecrate the temple, a graffiti appeared on the wall in front of the University Stadium. The line in neat, white  Malayalam letters, reads “Dalithante Savathinu Matramenthe Manam?” (Rough translation: “Are you uncomfortable only when it is a dalit’s body?”) No one knows who wrote it. Journalist T.C. Rajesh who spotted it says, “It appeared overnight.” The artist who died on Wednesday morning was cremated in the evening.

But a protest is brewing among artists and cultural activists.  “The times when rulers and lords of a land would decide the limits of an individual’s freedom have passed. This is a democracy, and individuals have the right to do what they wish to with their life, as long as it doesn’t hurt another person. What happened on Wednesday was pathetic. Last year, Ashanthan collected his Kerala Lalitha Kala Akademi award from Durbar Hall. That’s where his body was disrespected,” says Ajith Kumar G, curator, Arteria project. Ashanthan had contributed to Arteria a wall painting depicting coastal life. 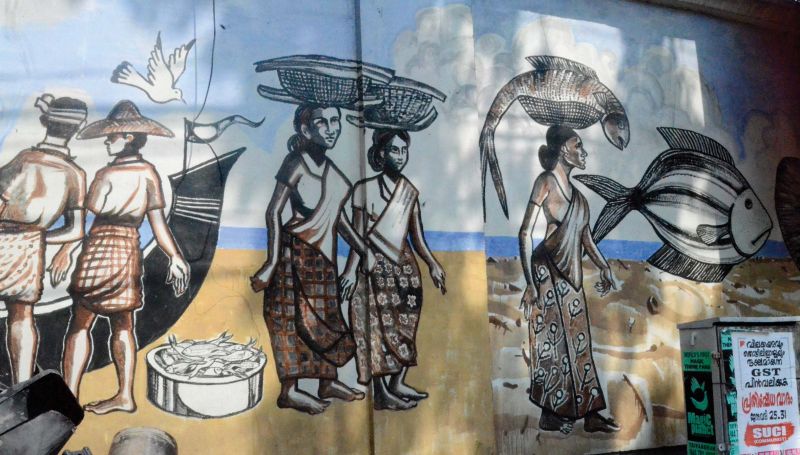 Asanthan’s painting at PMG Junction as part of Arteria project.

The sidewalk in front of the painting, at PMG Junction, will be where artists and friends will gather to register their anger, on Monday at 5 pm. The protest will be as peaceful as the artist, who passed away. “He was very unlike his name, Ashanthan (meaning restless). He always had a smile, was not temperamental, not boisterous. He kept away from media glare. He was a practising artist right through his life,” says B D Dethan, who knew him as an artist for over two decades. Many have taken to social media to condemn Wednesday’s incident. Most read it as a resurgence of casteist attitudes. “The artist’s freedom is under threat. Wednesday’s incident indicates that we have come to a dangerous point,” Dethan says.

Chinese soldier held on Indian side of LAC in Ladakh