Road rage gets a foreign face

The locals set the car ablaze and caught hold of one man and thrashed him mercilessly while the other one managed to escape.

A day after an African student killed a 35-year-old mother of two, the issue of African nationals residing in the city causing menace to the locals and disturbing peace and order, has hit the spotlight again.

African students are once again making news for the wrong reasons in the city. The death of a 35-year-old woman Sunday night in an accident involving a student, who was allegedly drunk at the time, brought angry people of Ganapathi Nagar in Hesaraghatta on to the streets Monday morning and several shops in the area remained shut during the day.

Gathering near Janapriya Apartments the people called for a day’s bandh in the area and demanded that the college managements rein in their students and make sure they  are better behaved.

The locals turned on the police as well, accusing them of taking no action against the foreign students for fear of diplomatic repercussions. While the unrest saw colleges and schools in the area declare a holiday, many of the students, who had no idea what the ruckus was about, silently joined the protests, taking the locals by surprise.

Said Mr Anil Reddy, a gram panchayat member from Chikkabanavara, “We have repeatedly told the police to arrest these students who are breaking the law, but the police don’t want to get into diplomatic issues with them and so just let them off with a warning. Locals have seen the same car (Fiat Palio, involved in Sunday night’s accident) being rashly driven in the area several times before. A month ago, there was another accident in the area involving these students.” 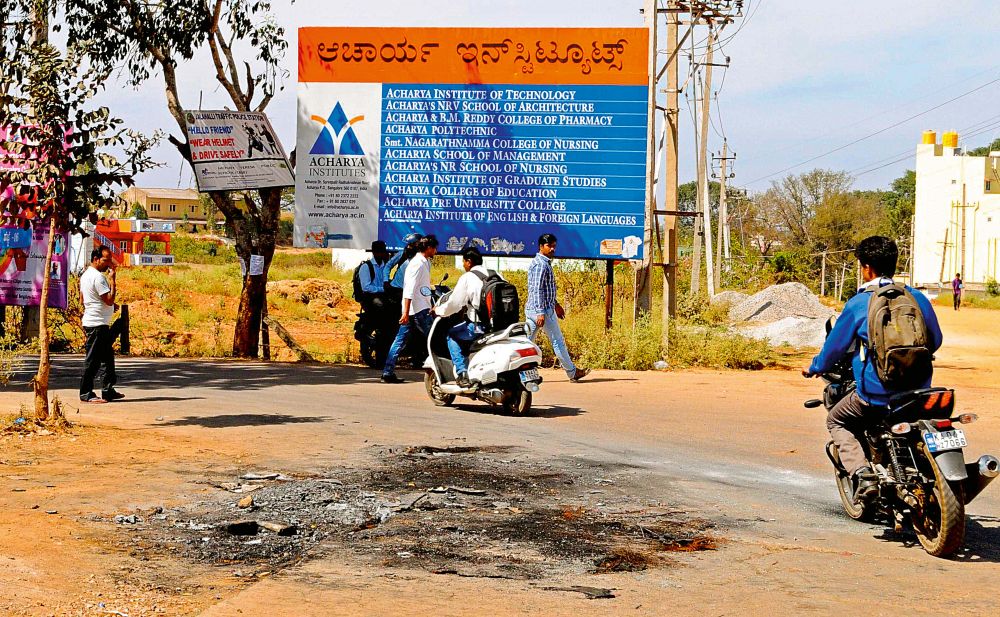 Locals allege that many students, including the foreigners, are found drinking alcohol and doing drugs near the secluded Gutta Basavanna Temple late night. When tipped off by passersby, they rush to the temple and shoo them away, they say.

Most of the African students  are from four colleges in the area, Acharya College, Sri Krishna Institute of Technology, Sapthagiri College and R.R. College, according to him. “They take over the roads, driving rashly, whenever they come to college and leave it, and also during the weekends. The locals fear to venture out on the roads as the police is never around to control them. A number of accidents take place. But in the absence of casualties they don’t get reported,” he added.

Another gram panchayat member, Prakash, said that going by the locals besides drinking heavily , some of  the students also take drugs. “They buy alcohol from wholesale outlets and stock them in their homes and cars,”  he alleged.

Who was the real culprit?

A few locals, who attended the funeral of Shabana Taj on Monday, claimed the African student who was arrested by the police, was not driving the car that rammed into her and her husband while they were on an evening walk on Sunday .

While the police have identified the driver of the car as Mohammad Ahmad Ismail, a Sudanese national, and a pharmacy/nursing student of Mallige Nursing College, the locals claimed that the student responsible was Micah S Pundugu, doing his second year BBA at Acharya College. “After the accident, we waylaid the car and confiscated the driver’s ID card and other bank cards. We saw his name was Micah S Pundugu, a second year BBA student of Acharya College. But the police claim they have caught one Mohammad Ahmad Ismail,” said Chand Pasha, a relative of Sanaullah, Shabana’s injured
husband.

Foreigners, a threat to the locals

Students from Sudan, Tanzania, Uganda, Nigeria, Ethiopia, Nepal, Bhutan, Afghanistan, and Iran study in the colleges located in and around Ganapathinagar in Hessarghatta. Most are enrolled in the Acharya College, Sri Krishna Institute of Technology, Sapthagiri College and R.R. College and also live in the locality.

Not all have integrated with the locals, who see them as a threat, afraid of their lifestyle, which is clearly foreign to them. “They buy second-hand cars with temporary registrations, and some of them even take cars on rent and zip past us on the roads around the colleges. If we confront them after some incident of road rage, they warn us, ‘don’t touch me. If I call, around 1500 people of my race will be here in half an hour,” says Mr Prakash, a local resident, adding, “The police don’t bother to  question even if they are roaming on their bikes or cars until about 1:30 a.m.”

“The police could be afraid that dealing with such foreign national students could land them in a diplomatic soup or they are simply incapable of dealing with their cocky attitude,” says Mr Anil Reddy, a gram panchayat member. “These students pay lakhs as fees to their college management who turn a blind eye to the mischief they do here,” he protests.

But Mr Bosco Kaweelsi, legal adviser for African students in Bengaluru, rises to the defence of the students. “An accident is an accident anywhere it happens. That student never planned to cause an accident. It could be a mechanical fault too. Whenever an African student finds himself in such a situation he is either  accused of driving under the influence of drugs or alcohol, and if it is a girl student, she is accused of being in the flesh trade as she is not supposed to be at the spot concerned at ‘those’ hours wearing ‘such’ clothes. My point here is simple, the locals cannot take law into their hands and decide everything for themselves,” he asserts.

Mr Kaweelsi claims a 21-year-old girl student of Acharya College, who was with a group of friends, was stripped naked and when someone offered her his T-shirt, he too was beaten up. “Are we living in Israel or India?” he asks. Deccan Chronicle had earlier reported about a section of Kamanahalli in East Bengaluru becoming a hub of  foreign students, who have come to the city for their education from Kenya, Nigeria, Somalia, Uganda, Zimbabwe, Ethiopia, Liberia, Tonga, and many other African countries.  The police  had then said that several of these students who indulged in unlawful activity were  overstaying in the city despite their visas having expired.

How the accident and subsequent rioting unfolded

Barely hours after a horrendous car mishap which left a woman dead and her husband injured, the cops arrested the driver of the car, Mohammad Ahmed Ismail, 20, a Sudanese national and a Mallige Nursing College student.
Ismail’s Fiat Palio car rammed into the couple while they were on an evening walk in Ganapathi Nagar on Sunday. According to the locals, Ismail’s car had bumped into several vehicles starting from 8th Mile, around 3 kilometres off Hesaraghatta Main Road while he was on his way to Ganapathi Nagar. “There were two cars, a Fiat Palio followed by a Wagon R with African students in it and both cars were being driven in a rash and negligent manner,” alleged Govind Reddy, an eyewitness.

According to the locals, after the accident, Ismail’s car started speeding in the direction of Acharya College with the irked locals following the car on their bikes. The car hit a hump resulting in an oil leak after which it came to a halt near a turn before Acharya College where the two occupants including Ismail, the driver, took to their heels. The locals set the car ablaze and caught hold of one man and thrashed him mercilessly while the other one managed to escape. Soladevanahalli police rushed to the spot and resorted to a lathi charge to disperse the crowd.

Meanwhile, the other car (Wagon R) fled the spot but locals caught up with the car before Sapthagiri College (around 3-4 kilometres from where the Palio was set ablaze) and set fire to it as well. There were three African students in that car including a woman, an eyewitness told DC. The locals then started thrashing the foreigners sparing the woman, when the police rushed to that spot, dispersed the crowd and took the students to hospital.

Jalahalli traffic police have registered a case under IPC section 304 – culpable homicide not amounting to murder and have arrested Ismail who has been produced before the magistrate and remanded to judicial custody.

The police maintain that an inebriated Ismail, who was on his way to meet his cousin, was over-speeding when he rammed into Shabana Taj killing her instantly and injuring her husband Sanaullah. The police also maintain that the man in the Palio car was a Sudanese national and was taken by the cops to hospital after rescuing him from a lynching by locals. Meanwhile, the locals chased another car in which there were three Tanzanians including a woman, suspected to be friends of Ismail, assaulted them and set ablaze their car near Sapthagiri College.

Ordnance Factory Board to be split into 7 entities