Bishnu Bhagat, popularly known as a 'chalta firta dustbin' (walking-talking form of a dustbin) said his main aim is to create awareness about the hazards of using plastics, be it sipping tea in a plastic cup or carrying shopping bags made of plastic. (Photo: ANI)

Mayurbhanj (Odisha): In an attempt to create awareness of how much waste is generated by plastic products, a 36-year-old resident of Mayurbhanj district is dressing himself using polythene bags and roaming on the streets of the district on his bicycle.

Speaking to ANI, Bishnu Bhagat, popularly known as a 'chalta firta dustbin' (walking-talking form of a dustbin) said his main aim is to create awareness about the hazards of using plastics, be it sipping tea in a plastic cup or carrying shopping bags made of plastic.

"I just want to send out a clear message to people that plastic is very harmful to the environment. I am wearing this dress made of plastic so that I can also teach children regarding the same. I urge you all to not to use plastic and its products in order to keep the environment clean and green," he said.

Bhagar said the idea to create awareness in this quirky manner stemmed from an incident in the past when an individual once threw a plastic bag filled with food in front of him.

"Moments after, I saw a cow chewing that plastic bag along with the food, it pained me. After a couple of days, I was informed that the same cow died because of consuming the plastic. From that day, I decided that I will make efforts to create awareness among the masses about the pollution caused by plastic and the products made from it," he added.

As part of his awareness campaign, Bhagar, on a daily basis, visits schools and engages children in talks with the help of his unusual attire. 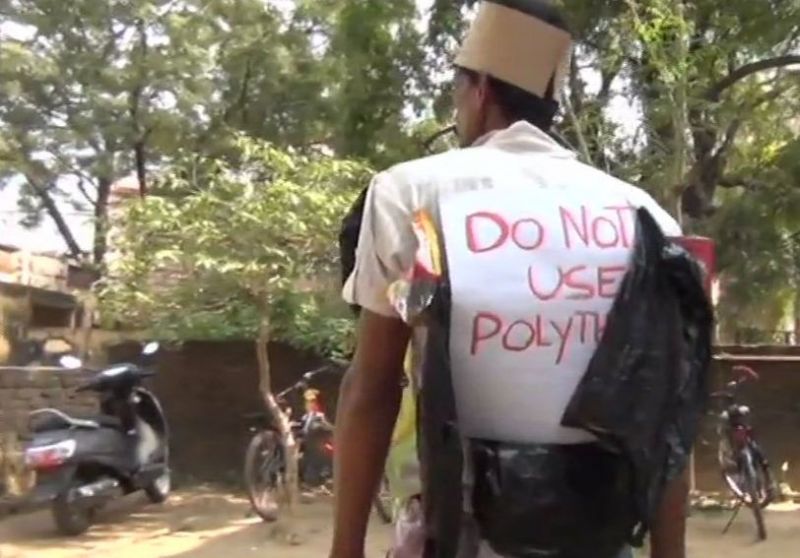 A principal from a local school in Odisha stated, "Our children love to talk to him regarding pollution because of his dress. They are totally convinced that the use of plastic will deteriorate the environment and increase the toxicity in the environment."

One of the school students, Sanjana, said: "From Bhagat, I learned that I should not use polythene bags and also encourage my friends and family members to stop its use."

Vineet Bharadwaj, Collector and District Magistrate of Mayurbhanj, lauded Bhagar for his unique move and said his efforts can culminate into a mass movement in the district and everyone can collectively work towards a better future.

India generates about 25,940 tons of plastic and more than 97,000 tons of solid waste per day, the Ministry of Environment, Forest and Climate Change had revealed in June.

In order to combat plastic pollution and other environmental issues, Prime Minister Narendra Modi, on the occasion of World Environment Day on June 5, had pressed for the need to reduce consuming plastic.

"India is the fastest-growing economy in the world today. We are committed to realising the standards of our people in a way that is sustainable and green. Environmental degradation hurts the poor and vulnerable the most. It is the duty of each one of us to ensure that material prosperity does not compromise our environment," the Prime Minister had stated.

2 killed in cop firing after violence in Bengaluru over derogatory post, accused held