Telangana has to walk the talk on infant deaths

Hyderabad: The National Family Health Survey results released recently shows how far the states in India are lagging behind in achieving the infant mortality rate target set by the Centre, of 28 deaths per 1,000 live births, by 2019.

Andhra Pradesh has done much worse than Telangana in the rankings, with the IMR being 35.  The infant mortality rate in  Telangana is 28.

Uttar Pradesh tops the list of the worst IMR with 64 deaths per 1,000 live births. UP was recently in the limelight for the tragic Gorakhpur incident where over 61 infants died in just 72 hours due to Japanese Encephalitis and the lack of proper facilities like oxygen tanks in the neonatal unit of a government hospital.

However, doctors claim that the total under five mortality rate in Telangana is even higher at 32. The lack of proper nutrition after birth, starting with delayed breast feeding, is a crucial cause for this, say gynecologists.

Dr Pallavi Sinha, a gynecologist, says, “The initial years of growing up is important and a child’s diet should be specially monitored. Regular consultation with a pediatrician is also important to know about the child’s health.”

Doctors claim that the high rates of IMR can be brought down only with proper prenatal care. The Telangana newborn action plan was launched towards the end of 2015, but is yet to reach many rural areas. 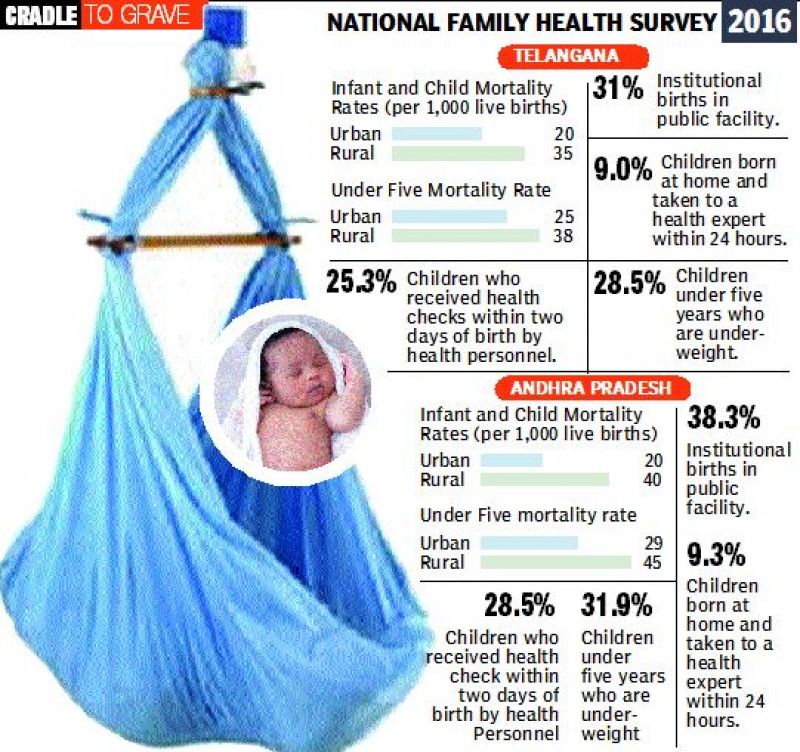 Dr K. Padmaja, the district medical officer, says, “The plan aims at educating women about the care needed during the pregnancy period. Lack of proper maternal information and delayed initiation of breastfeeding is one of the key reasons for the death of many infants. Babies are required to be fed immediately so that they get the right nutrients which can keep them healthy.”

Doctors claim that the IMR is improving, but that the health of infants needs to be monitored more carefully. Dr Rajisree Nambiar, gynaecologist says, “We have improved from the preceding years. However, we are still low as opposed to other southern states like Kerala, Karnataka who have an IMR of 10 to 18. There is still a lot of prejudice in families against institutional births and vaccinations. Vaccinations are crucial to ensure that the child is not infected during the early years, which is a reason for high under-five mortality rates.” The ‘breast milk bank’ recently started in Niloufer hospital will be a boon for many mothers, say doctors.

Sanjay hits out at TRS MPs for ‘fake protests’